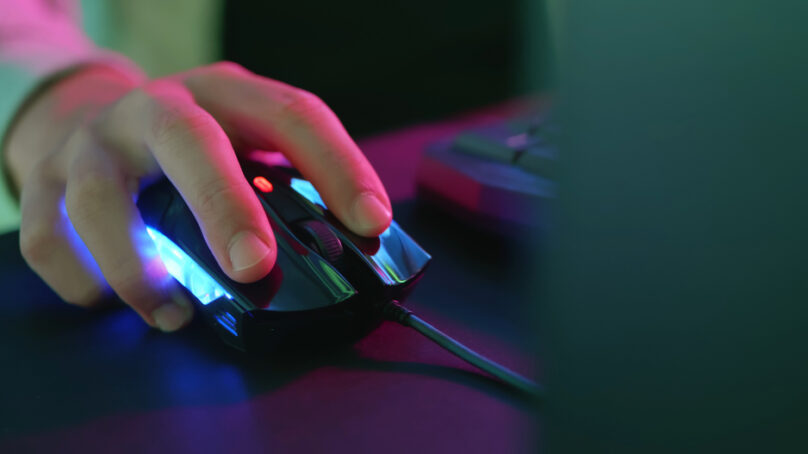 A honeycomb shell and no superfluous RGB makes Cooler Master’s MM710 the lightest gaming mouse on our list by a fair margin. It’s also due to its small shape that’s best suited for tip and grips styles, with buttons for right-handed users. The overly exposed design may not be to some users’ taste, but the results can’t be denied. It trims out a lot of unnecessary weight, yet retains a solid structural foundation. Get this gaming mouse if you want to be as competitive as possible.

Don’t want cavernous holes on your gaming mouse? Perfectly understandable. Roccat employs a honeycomb shell on the Roccat Burst Pro, but instead of leaving it uncovered to the elements, a thin sheet of translucent plastic is layered over it. The RGB light looks fantastic as it shines through the diffusive material. This strikes a balance between the aggressive weight reductions of super-lightweight gaming mice and more conventional gaming mouse designs. Roccat describes the pliable cable used as a near-wireless experience – no need for a mouse bungee. The Burst Pro is also slightly on the bigger side, making it a great all-around option for a variety of hand sizes.

The Corsair Sabre RGB Pro looks like your more conventional gaming mouse. It’s the largest and heaviest on our list as it doesn’t use a honeycomb shell, and it features a more ergonomic shape for long-term comfort. Considering its size compared to other gaming mice, the weight of the Corsair Sabre RGB Pro is more than respectable. No doubt many will appreciate this old-school design, making it a suitable replacement for older gaming mice.

A few years ago, choosing a wired or wireless gaming mouse might’ve been a contentious topic. You’d have to weigh up the convenience of a wire-free set-up against the slight input lag and heavier batteries.

Over time, wireless technology has improved so much it’s nearly inconsequential – to the point, now, where manufacturers can accurately claim their optimised 2.4GHz wireless, powered by a dedicated receiver, is faster than bouncing signals down a wire. Weight remains an unavoidable aspect, but is largely offset by the use of lighter and energy-efficient batteries.

Conversely, the wires of a wired gaming mouse have improved too. Rarely will you find bare rubber wires on a gaming mouse, prone to tangling and snagging on the desk’s surface. Modern wires are often brained in a soft and bunchy material which is lightweight and flexes easily. You’ll hardly notice their presence – they might as well be wireless.

As such, the wired versus wireless debate boils down to personal preference, not technical ones. If you want a gaming mouse you can plug in and forgot about for years at time, wired makes sense. For those seeking the cleanest gaming set-up free from any wires and who don’t mind recharging their peripherals from time-to-time, there are fantastic wireless gaming mice available with performance matching their wired equivalents.

A gaming mouse’s weight is the biggest focus

Current gaming mouse technology has improved to the point where it’s largely perfected, the sensors ‘flawless’, as detailed in our Gaming Mouse Guide. Pick up any reputable brand’s gaming mouse and there’s a high chance nothing’s wrong with it at a technical level. Cross-reference it against the community-curated lists of ‘flawless gaming mice’ if needs be.

Right now, weight is the most aggressively chased aspect of a gaming mouse. Lightweight gaming mice are massively popular, with manufacturers counting down to the gram. Any weight not necessary to the mouse’s function is shaved down or off entirely, hence the weird honeycomb shells.

Funnily, this is in stark reversal to gaming mice from only a few years ago which weighted well over 100g by themselves, but also shipped with additional weights to make the mouse even heavier! Interesting how trends evolve over time, sometimes in completely contradictory directions.

It’s personal preference, but from esports pros to casual gamers, the consensus seems to be that a lightweight gaming mouse is best for gaming. It lets you manoeuvre the mouse with a featherweight touch, edging the cursor pixel-by pixel. As there’s less friction against the mouse pad, less inertia is needed for even faster flicks and they can be stopped on a dime.

Gaming mice on the heavier side haven’t been rendered obsolete. Used over the course of decades, some gamers have built up strict muscle memory of heavy gaming mice that’s hard to shake. Making the switch to a lightweight gaming mouse, possibly over 50% lighter than you’ve grown accustomed to, could undo years of practice and knock you back to square one.

In the face of the explosive popularity of a lightweight gaming mice, you’ll see some esports pros swear by the stability a heavier one affords. Claiming it helps smooth over any unwanted jumps in the cursor’s movement when you’re trying to make precise sweeps.

A gaming mouse needs to be comfortable

Everybody has their own slightly quirky way of holding a mouse and there’s various hand sizes. Of course, we mustn’t neglect left-handed users also. It’s partly why there’s just so many gaming mice available on the market. A gaming mouse might feel perfectly sculpted to one person’s palm, but be completely incompatible in another.

The gaming mouse is arguably a PC gamer’s most important input. Hunkering down for a long gaming session, you need your gaming mouse to be not only performant spec-wise, but comfortable too. Wrangling an ill-fitting mouse makes it unnecessarily hard to aim and can lead to crams and strain.

Here’s a key step to sift through all the gaming mice and find what works best for you. Identify which way you grip your mouse – palm, tip or claw.

Palm is full-contact, with the entire length of hand lying over the mouse’s body, from the base to the left-and-right click. It isn’t the fastest for aiming, but gives you more calculated control.

Tip grip is on the opposite end of the spectrum. As the name suggests, only the tips of your fingers contact the gaming mouse, so it favours twitchier playstyles.

Whereas claw is the in-between grip. Your fingers are arched steeply over the left-and-right click, but the mouse’s rear hump is pressed right up against your palm.

Each gaming mouse is sculpted according to one of or a hybrid mix of these grips. You’ll often find the manufacturer’s recommendation for grip in the description. If not, you can roughly deduce it from the images and dimensions. For instance, a small mouse won’t be well-suited for those with larger hands, or a bulky MMO mouse for tip grip.

Fortunately for left-handed user, most gaming mice are designed to be ambidextrous. However, while the general shape may conform to either hand, the side-mounted buttons tend to favour the thumbs of a right-handed user.

Buttons at your disposal for gaming

In a line-up of computer mice, you can easily tell apart a gaming mouse from the non-gaming ones by the increased number of buttons alone. A bog-standard mouse might only have three: left click, right click and middle mouse. Where most gaming mice have at least an extra two, if not more: forward and backward. In a game’s option menu, they’re listed as ‘mouse 4’ and ‘mouse 5’.

To a gamer, they prove themselves invaluable. Mounted to the side of a gaming mouse, they’re only a small thumb movement away and can be configured to speed up in-game actions. Instead of blindly fumbling over your gaming keyboard for the G key for grenades and F key for melee, rebind them to forward and backward so you don’t have to lift off the WASD cluster and impair your movement.

Though, something’s not quite adding up. On the gaming mice we’ve recommended above, they list six buttons. Wondering what this mysterious ‘sixth button’ is? Manufacturers also count the DPI toggle towards the total count. This is technically correct, but due to the DPI toggle’s position under your palm or the mouse itself, it’s hardly useful for rebinding in-game actions.

It doesn’t have to stop at six. Why not more? For MMO, RTS and MOBA players who’ve got rows of hot-bars and consumable items, there’s gaming mice with a number pads’ worth of keys strapped to their side for the highest actions-per-minute imaginable. They’re not limited to games, either. By default, many applications will recognise extra keys and rebind them to other functions. For instance, browsing the web is sped up considerably with extra buttons for page forward and page backward.

What’s DPI on a gaming mouse?

Dots-per-inch, or ‘DPI’ for short, often tops the spec-sheet of a gaming mouse. Surely that means it holds some importance, so why are we only mentioning it now after the non-technical features? In the grand scheme of things, DPI is grossly overblown. In terms of technical specs, what really matters is a gaming mouse’s sensor as detailed in our Gaming Mouse Guide.

It’s game dependant, but most gamers play at around 400-800 DPI in first person shooters for deliberate aim, and 1,600-3,200 DPI in the twitchiest esports. No one’s maxing out the sliders in their gaming mouse’s software and playing at 16,000 – any semblance of accuracy is thrown out the window. At such a ridiculously high DPI, building muscle memory on how far you’ve got to move your mouse to perform a 360-degree rotation borders on impossible. The slightest bump will send your character’s head spinning.

On a bog-standard mouse, there’s a fixed level of DPI. If it’s too sluggish or too sensitive, you can circumvent this issue somewhat using Windows’ pointer precision option, but this only moves in undefined steps. What exactly is two notches down from ‘fast’?

Most gaming mice are designed to be used alongside a suite of accompany software; Corsair iCUE, Razer Synapse and so on. Here, a gaming mouse’s entire feature set is unlocked for the user to customise to their exact liking. Most notably, the DPI. You may not use the whole range, but a gaming mouse lets you adjust DPI pixel-by-pixel with precise values exposed to user.

Nothing’s left to guess work or ambiguous sliders, if you want an in-between value like ‘1,200 DPI’, you can set it though a gaming mouse’s software. DPI, like gaming mice themselves, aren’t a one-size-fits-all. Rather than relying on a fixed value and begrudgingly changing your playstyle to accommodate it, experiment with an adjustable DPI and find what works best for you.

Customisation of a Gaming Mouse

Software and customisation are intrinsic aspects of a gaming mouse. There’s not too much you can do with a non-game mouse. Plug it in, mess around with Windows’ mouse options and pray it doesn’t have horrendous levels of acceleration, angle-snapping and smoothing. A gaming mouse is designed to be customisable, however. Hone in your DPI, rebind buttons, program macros, RGB lighting effects and more.

What’s more, most gaming mice have built-in toggles for quickly switching between DPI pre-sets. Through software, you can set one slower DPI for first-person shooter games, and other faster one for real-time strategy game. Boot a game, toggle over to its respective pre-set and play at the optimal DPI, without manually changing it each time.