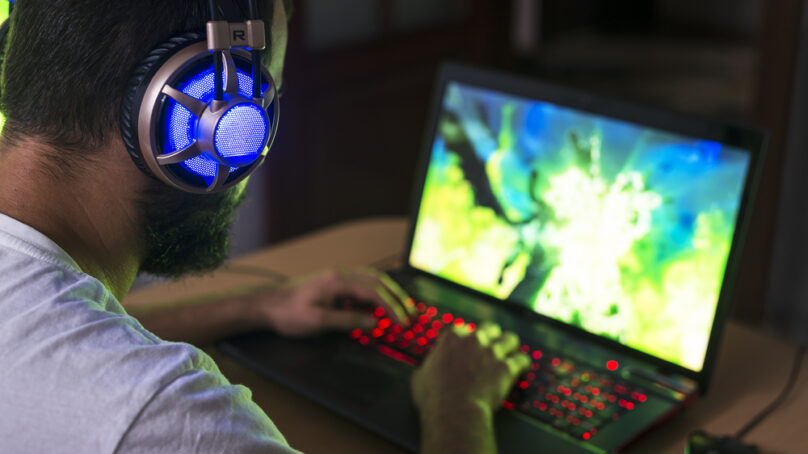 Looks can be deceiving. One quick glance at the Razer Blade 17 and the Apple MacBook-like form-factor might throw you off. It doesn’t convey the typical signs of a gaming laptop. Where’s the abrasive styling and garish colour scheme?

With a restrained exterior, sturdy metal construction and the smoothest glass trackpad you’ll find on a Windows laptop, the Razer Blade 17 is one of the most premium-feeling high-end gaming laptops on the market. Check it out, over at Ebuyer.

We’ve covered a fair few of Lenovo’s gaming laptops from their Legion line-up, and we always come away impressed. Lenovo does a commendable job of choosing a well-rounded selection of specs. The Lenovo Legion 7 is no exception.

Nothing’s out of place or sticks out as a poor choice. From the CPU to the display, they’re all specs we would’ve chosen if we had to build a laptop from scratch. It’s not as sleek and fashionable as the Razer Blade 17, but the gaming experience is as high-end as it gets – just look at that GPU TDP! Check it out, over at Ebuyer.

ASUS makes the most experimental and forward-thinking gaming laptops for their ROG Zephyrus line-up. This isn’t as out-there as the dual-screen ASUS ROG Zephyrus Duo we’ve covered previously, but it retains the hinged keyboard which lifts to expose a large 12mm intake for improve cooling.

This transformable design means they’ve managed to squish in stupidly powered components into a ultra-thin form-factor which just wouldn’t have been feasible without it. Check it out, over at Ebuyer.

When considering purchasing a high-end gaming laptop, a gamer’s mind is fixated on the discrete graphics processing unit – NVIDIA RTX 30 Series, AMD Radeon RX 6000 Series and so on. Understandably so. The ‘dGPU’ is by far the most important part of a gaming-focused computer.

However, it’s not the only GPU you’ll find in a gaming laptop. On most laptops – including gaming ones – the processor uses its own integrated GPU. This ‘iGPU’ is underwhelming performance-wise, but only draws a smidgeon of power in comparison to the dGPU.

In a laptop, if a dGPU was the only GPU, its battery would be drained in an instant. Designed to accelerate the latest triple-A games and other hardware-demanding applications, it’s reasonable to expect the dGPU in a high-end gaming laptop to consume in excess of a hundred watts alone.

To save on power consumption, the preferred set-up is to smartly switch between the iGPU – sipping a few watts at most – and the dGPU depending on the load. If you stream a video while on battery, the iGPU is enough to handle it and conserve charge. Booting up a resource-heavy game, the dGPU kicks in.

As there are two GPUs in the laptop, however, which one should be connected to the laptop’s integrated display? On a conventional laptop, it must be the iGPU, as the dGPU can’t be constantly called upon while on battery. Having the iGPU dictate the display works well in a portable scenario in which power consumption matters more than performance.

Troubles arise in the opposite scenario. When plugged in and gaming, frames are produced by the dGPU as intended. But instead of being sent straight to your display with no intervening obstacles, they’re re-routed to, and processed by, the iGPU to be displayed. This takes time and can mean a noticeable impact on performance – a ‘bottleneck’ in the truest sense of the word as each frame must pass the iGPU one-by-one.

It’s particularly troublesome in less graphically demanding games like esports in which the dGPU could easily churn out hundreds of frames-per-second, but is held back by the iGPU’s inefficient processing leading to higher latency.

What is a MUX Switch?

Fortunately, there is a solution. A multiplexer switch or a ‘MUX’ switch as its commonly called. As the name suggests it accepts multiple signals – in this case the iGPU and dGPU – and outputs one to the display, acting as a switch between the two when needed. Importantly, this results in higher performance as the dGPU has a straight signal to the display and no longer needs to involve the iGPU.

The MUX switch is a microchip soldered directly to the mainboard with an uninterrupted connection to the display. As such, you can’t upgrade a gaming laptop with an off-the-shelf MUX switch. It must come pre-installed from the factory.

Understanding of and discourse surrounding the iGPU’s bottleneck on performance has grown a lot in recent years among gaming laptop circles. Many have voiced their concerns to manufacturers and suggested they implement a MUX switch on future devices. These manufacturers have responded accordingly and we’re beginning to see more and more high-end gaming laptops with a MUX switch, though finding one may be tricky.

The concept of a MUX switch isn’t the easiest to convey in layman’s terms. Nor does it contribute to performance by itself, unlike the all-important CPU and GPU combo. As a result, you won’t often find ‘MUX switch’ plastered all over the marketing of a gaming laptop. The main specs of a gaming laptop continue to take precedence over a humble MUX switch, so you’ll have to do some digging into a product’s spec sheet and cross-reference user reports to find out if it’s present.

That said, we cannot understate the necessity of a MUX switch in a high-end gaming laptop. According to ASUS Republic of Gamers, it boosts performance “by 9% on average, with some games like Rainbow Six Siege seeing more than 30%”. While it’s somewhat understandable that not having a MUX switch in a scrimped and saved low-end gaming laptop, it’s an absolute must on high-end ones.

The spec sheet often doesn’t convey the whole story of a gaming laptop’s performance. It could tick all the right boxes on a surface level – high-performance CPU and GPU combo, 16GB of RAM and a large capacity SSD, a high refresh rate display and more – but this leaves a lot of room for variance.

For instance, what’s the thermal design power of the GPU (or the TDP, for short). This measures, in watts, how much power is produced by a component and in turn helps describe its performance. If a GPU’s TDP was nudged up from 60W to 90W, you could infer it’s running faster.

From the low-end to the high-end, this is exactly what’s happening across all performance tiers of gaming laptops – but it isn’t being clearly communicated to the consumer, unfortunately.

You could have two near-identical NVIDIA GeForce ‘RTX 3070’ gaming laptops. Since they’re powered by the same GPU, you’d expect roughly equivalent performance. This is not strictly the case, as under the hood one could be limited to 60W, while the other runs at 90W.

You cannot take a laptop’s GPU at face value anymore. NVIDIA once heavily used a ‘Max Quiet’ (Max-Q) and ‘Max Performance’ (Max-P) naming scheme for low-wattage and high-wattage laptop GPUs respectively, but they’ve slowly phased it out with no suitable replacement, you only see some Max-Q gaming laptops nowadays. Manufacturers rarely emphasise a laptop GPU’s TDP in the product name, no ‘RTX 3070 (90W Version)’. Instead, it tends to be nestled under an ‘advanced’ or ‘technical’ section.

A lower TDP is not necessarily a bad thing. It’s the sore lack of clear and understandable guidance to distinguish one supposed GPU from another. Depending on your use case, a lower TDP may be preferable as it allows high-performance GPUs to adequately cooled in a thin and light gaming laptop.

Say you’re an on-the-go student who wants a high-end gaming laptop for carrying around campus and for gaming in dorms. A higher TDP GPU certainly nets more performance, but you’ll usually find them in a bulkier and heavier chassis. A lower TDP GPU isn’t as fast, but it still affords you gaming performance when needed, but in a more portable form-factor.

If you want the best high-end gaming laptop, a similar line of thought should be applied throughout. Check a product’s spec sheet and cross-reference it with technical manuals, user reports and more to uncover the whole picture. It might simply state ‘16GB of RAM – but is this in a dual-channel configuration, and what’s its speed? The SDD. Is it SATA or NVMe? TDP, MUX switch and more… These unglamorous and hidden specs are often essential for making a high-end gaming laptop truly stand out.