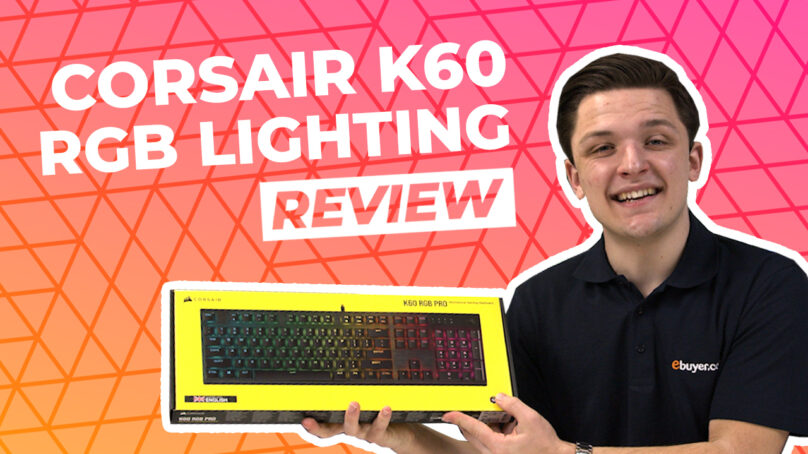 ‘Gaming keyboards’ and ‘RGB’ are inextricably linked, practically kick-starting the lighting craze, which gradually flowed over onto other gaming peripherals. Let’s see how the Corsair K60 RGB PRO confidently evolves the concept to the next level.

The Corsair K60 RGB PRO is one of the first keyboards to market to introduce Cherry’s brand-new VIOLA switches.

You’ve probably already heard of Cherry, and for good reason – it’s the go-to brand for supplying switches for mechanical keyboards. The strong German heritage of precision engineering is a cut above the rest, battle-tested with decades worth of real-world deployment amongst gamers.

Their name is deeply ingrained in the world of mechanical keyboards, the de-facto reference point against other available brands. Everything’s compared to Cherry MX Blues, Cherry MX Reds and whatever is in-between.

If Cherry already has a robust line-up of reliable switches, what’s the plan in introducing another into the fold? With the VIOLA, Cherry hopes to breach new markets, and finally wipe out the presence of underperforming, swishy, unsatisfying rubber-dome keyboards.

A new challenger approaches with unique characteristics, so it’s hard to pin-point and compare against a pre-existing switch. However, it mostly resembles Cherry’s MX Reds, the gaming-favoured switch.

Laying out the raw specifications purely for comparison’s sake, VIOLA has got; a 2mm actuation point, 4mm of total travel and a 45cN actuation force. For reference, here are their other switches; Blues – 60cN, Browns – 55cN and Reds – 45cN.

Digging deeper, the differences start to emerge, becoming a cross-hybrid of sorts. After the two millimetres of pre-travel, the actuation force significantly ramps up to 75cN by the end of the full distance.

It’s a unique approach, a distinctive two-staged switch, making it stand out from the rest. On the way down, you’ve got an ergonomic, wobble-free typing experience, but it springs back for a fast reset.

Rather an evolution than a complete overhaul of Cherry’s design philosophy, it continues forward the industry standard cross-stem, so all your existing keycaps sets are backwards compatible.

On the Corsair K60 RGB PRO gaming keyboard, the RGB doesn’t just piece through the lettered surface of the keycaps, the entire base of the keycap’s exposed for an amplified underglow. The keycaps are made from a transparent material, so the light is diffused uniformly throughout the entire keycap, creating a pleasant soft gradient.

Made from aluminium, the keyboard deck’s rigid, Pressing firmly down, there are no awkward creaks or flexing. It’s reassuringly dense, resisting accidental bumps across your desk. It retains a stealthy appearance after being anodised black, so the RGB stands out against the background.

All these lighting capabilities, and more, are controlled through Corsair’s intricate but easy-to-use software iCue. Each individual key is addressable for deep, personalised customisation.

Or, if you want to plug-and-play, load up one of Corsair’s pre-set designs for a smart looking set-up in seconds.

iCue isn’t just a simple software for interfacing with the RGB. If you so wish, you can dig deep and fundamentally alter the standardised keyboard layout with key rebinding and programable macros.

If you’ve got other Corsair components and peripherals, synchronise lighting across your entire system – from your fans to your headset – for an impressively co-ordinated set-up. It’d go perfectly with Corsair’s Katar Pro XT gaming mouse and their Void RGB wireless gaming headset.

Corsair has teamed up with a number of game developers and publishers, like Ubisoft, to design bespoke iCue implementations into its games.

They’re all intended to enhance your gaming experience by bringing your external peripherals into the game world itself, to heighten immersion and set the mood accordingly.

This comes in several diverse forms; from syncing the RGB to the surrounding in-game environments (and triggering lighting effects when lightning flashes on the screen), to a more mechanical-focused take (such as highlighting the relevant quick-time-event key so you never slip up and ruin the flow of gameplay).

The Corsair K60 RGB PRO features full N-key rollover and 100% anti-ghosting, so you can hold down multiple inputs that’ll always be reliably registered by the keyboard.

A ‘normal’ keyboard, may only be able to handle a few key inputs simultaneously. When you’re rapidly alternating between the left and right keys to instinctively peek corners, while also holding down other keys for crouch and push-to-talk functions, a normal keyboard is sure to become overwhelmed with the increased demands. This keyboard, however, will handle whatever you throw at it.

Most importantly, there’s a toggle to outright disable the Windows key. While the Windows key definitely has its advantages for quickly navigating the desktop, in-game, it can cause all sorts of headaches.

A slight brush of the Windows key, and you’ll be thrown out of the game in a moment’s notice. Instead of bringing up the relevant context menu it ‘thought’ you wanted – disable it!

It’s a full-sized keyboard, with a number pad and a whole host of shortcuts lined up on the function row.

Control volume and play-and-pause media playback without overly relying on the mouse.

To save yourself from alt-tabbing mid-game to load up the iCue software, control the on-board lighting on-the-fly with a couple handy shortcuts.

A well-rounded combination of reliable Cherry switches, a study aluminium frame and RGB customisation with 16.8 millions colours ensures you’ll be tinkering and experimenting with this keyboard for years to come.

Check it out, over at Ebuyer: Corsair K60 RGB PRO Mechanical Gaming Keyboard

Let’s get back to it! – Lenovo ThinkBook