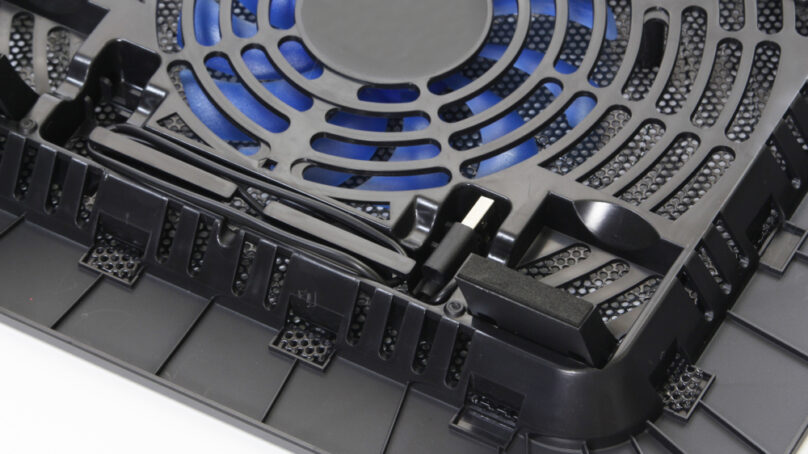 A gaming laptop gets hot, sometimes uncomfortably so. There are safety measures in place to ensure a gaming laptop does not overheat to the point of damage. Even so, when you are coming from a high-airflow gaming desktop that hovers around 70°C under load, it is unnerving to see a gaming laptop’s temperature creep up to the high 90°C mark and even nudge 100°C.

By this point dynamic frequency scaling, or ‘thermal throttling’, should have kicked in to slow a component’s clock speed and reign in the temperature, but now you are conceding performance on a performance-focused device. It is a trade-off no-one wants to make.

What is a cooling pad?

A basic cooling pad will come with one fan and limited adjustment. Invest a bit extra, however, and you can get cooling pads with several fans, USB hubs and passthroughs so you don’t lose any slots by using the USB-powered fans and, of course, RGB rim lighting so it will look right at home in your gaming set-up.

Why would you want a cooling pad?

A gaming laptop packs high-performance hardware into a confined space. We are talking about hardware that can run the latest, most graphic-intensive releases at a high resolution and frame rate, in a portable form-factor that is slim enough to fit into a backpack.

It is remarkable how much performance a modern gaming laptop offers. Who would have thought you could run real-time raytracing on a portable device?

It’s no wonder a gaming laptop gets hot. If your gaming desktop starts to overheat, you can address it in several ways: switching to a high-airflow case, adding more case fans, investing into water cooling, and more. In this regard, a gaming laptop is extremely limited; it needs any help it can get. This is where a cooling pad comes in. But the question is, does it even work?

A cooling pad helps in reducing temperature, but the degree to which it does so may you underwhelmed. As a cooling pad is not in direct contact with the gaming laptop’s internal components, you must set your expectations accordingly. It is not a magical solution that gets rid of overheating in its entirety, but it does have an effect, if marginal.

What helps most is simply lifting the rear of the gaming laptop up so more air can circulate underneath it. Laptops have rubberised feet that stop them from slipping, as well as giving it lift off the desk. This forms a small gap between the laptop and the desk for cool air to be drawn through.

It may be enough for a low-powered laptop, but for a high-performance gaming laptop, this suffocates it. This gap is too small for the laptop’s fans to suck in adequate air, and they end up recycling the same heated air that gathers around the device, resulting in overheating.

It’s the same problem as storing a console in an enclosed TV stand, or thick carpet blocking a gaming desktop’s vents.

Made from perforated metal as to not restrict the fans, a cooling pad raises a gaming laptop up by a few centimetres, a big gap in comparison. A cooling pad lets cool air circulate around a gaming laptop freely, so it is no longer starved for air, and it does not trap in any heated air either.

What’s more, if you’re not using an external monitor, a cooling pad raises your laptop’s display up to a more ergonomic height so you won’t have to hunch over as much. Yes, you can achieve largely the same effect as a cooling pad by propping the rear edge of your laptop on a couple of stacked books, but a cooling pad is a less fiddly, more permanent solution.

The less convincing aspect of a cooling pad is the built-in fan. It delivers more air to the gaming laptop, but it makes a negligible change in practice. Again, this fan is not blowing onto the components directly as they are obscured by the laptop’s housing. While a laptop-sized fan certainly looks impressive, when only a fraction of it lines up with the intakes, it hardly impacts temperature. It is the role of the laptop fans to cool components, and a cooling pad’s lift gives them more than enough air to work with.

Should I get a cooling pad?

Even if a cooling pad only lowers your gaming laptop’s temperature by a few degrees at most – don’t expect more than 10 or even 5°C in most cases – it is nothing to scoff at. If a gaming laptop is right at the cusp of throttling, the few degrees of cooling a pad offers could save the day.

Reduced temperatures also improve a device’s lifetime; it can’t be good to game at 100°C for hours on end. A cooling pad or laptop stand – anything that raises your gaming laptop up so the fans aren’t blocked – is worth it, so check out Ebuyer’s range of laptop accessories.