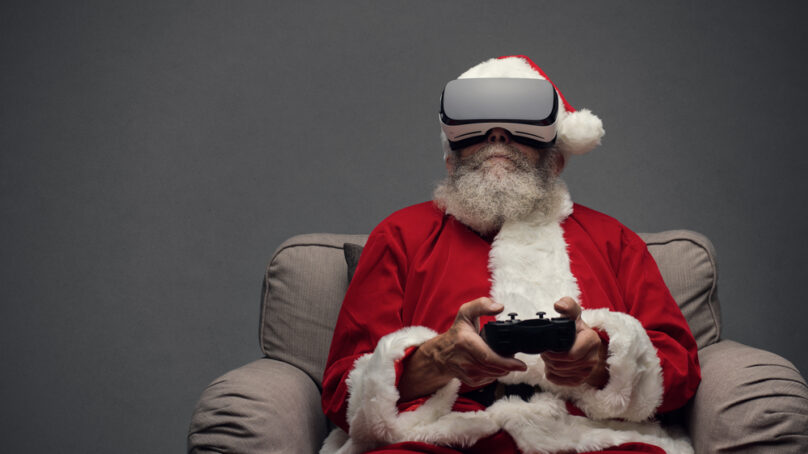 It’s the festive season, and you know what means? Gift guides. Right as the calendar flicks over to December, the internet is inundated with them. Particularly those targeted squarely at gamers – a notoriously tricky bunch to buy presents for. If a gamer has already played all the biggest releases, what’s left to get?

We’re gamers ourselves at Ebuyer, and from a gamer’s perspective browsing these gift guides, a dubious amount come up with merely ‘okay’ stocking stuffer ideas – like vinyl figures and gaming-related apparel. The big day draws near, so if you’re wanting a last-minute gift that’s sure to impress even the grumpiest gamer, here’s out top picks!

First things first, what’s their preferred platform of choice – console or PC? If it’s a game console, which one – PlayStation, Xbox or Nintendo? We shouldn’t rule out mobile gamers either, they’re an increasingly popular demographic.

Getting an answer to this age-old question ensures the gamer in your life won’t unwrap a dud on Christmas day. Unless ‘multi-platform’ is clearly imprinted on a product’s box, you should assume a PlayStation-branded peripheral or accessory only works on a PlayStation console, Xbox-branded ones on an Xbox and so on.

Broadly, a gamer sticks to one platform and grounds themselves to it for the foreseeable future. As that’s where they’ve amassed a large collection of games, sunk hundreds of hours’ worth into save files and befriended their online teammates. With the right knowledge at your disposal, you could pick out a gaming gift that’ll be used for years to come, and who doesn’t want that?

For those really swinging for the fences this Christmas, dig a lil’ deeper and find out if there’s a secondary platform they play on. They may solely refer to their favourite one, but it isn’t uncommon for a gamer to own several platforms. A gaming PC for playing twitch-reflex esports games on a keyboard and mouse and high refresh rate set-up, and a game console for experiencing the latest big-budget blockbusters on a gargantuan 4K TV.

If that’s the case, keep an eye out for gifts that are multi-platform compatible for gaming on any device.

What’s most important to a gamer? It’s the games, of course. As such, in the unending pursuit to secure a copy of every game in their backlog, they often neglect a controller upgrade. Simply opting for the one that’s bundled in the console’s box.

These controllers are dragged through the wringer, with sanded-off sticks and wonky buttons. It doesn’t matter to a gamer if it’s clinging on for dear life, as long as it’s functional! For them, a standard controller is ‘good enough’. Why spend money on an upgraded controller, when they could’ve bought a new game? But that why it’s the perfect gift for a gamer.

Honestly, they don’t know what they’re missing out on with a higher-quality controller. The stand out model is the all-new Xbox Elite Wireless Controller Series 2. What’s instantly noticeable about this controller, before you’ve even twiddled the sticks, is the sheer heftiness of it.

Partly made from metal, it’s reassuringly weighty in the hands, while the wrap-around rubberised grip makes it comfortable to clench onto for drawn-out gaming sessions. A far departure from the toy-like feel of a standard controller’s creaky plastics. Built like a tank, it’ll undoubtedly last an entire console generations’ worth of gaming.

The main attraction of the Elite is its impressive level of customisation. Swap in-and-out D-pads for ones which best suit your playstyle, use adjustable-tension sticks to hone-in your aim and a short-hair trigger lets you lay down rapid fire on your opponent.

Our favourite feature of the Elite is the back-mounted paddles. When you’re handling a normal controller, only three sets of fingers get any use. Index and middle lay on bumpers and triggers respectively, while the thumbs must pull double-duty and flick between the sticks and the forward-facing buttons.

That’s four other fingers dangling idle at the back. With paddles, however, you can put these digits into action. For instance, you can re-bind a game’s jump and crouch buttons to the paddles to duck weave out of the opponent’s fire and retaliate back, without lifting off the sticks. It’s a game-changer.

Unlike other official Xbox controllers – included the last-gen Elite – this one comes with a built-in rechargeable battery. So you’re always topped-up for up to 40 hours – no more scrounging around for replacement batteries mid-game. As the name implies, it works straight out of the box with Xbox consoles, but it can also connect wire-free over Bluetooth to Windows PC and tablets.

Weirdly, these beloved customisation features haven’t trickled down to in-the-box controllers, but they aren’t exclusive to the Elite. Check out Razer’s controllers for a multi-platform option. Plus, a standard controller’s still a great gift for couch co-op shenanigans or replacing a well-worn one.

Now, this may sound like a terribly boring suggestion, but for a gamer, we’d liken it receiving socks on Christmas. Not exciting per se, but the gesture’s appreciated nonetheless. It’s highly likely they’ve also asked for a wire-less gaming peripheral or accessory on Christmas that’ll need recharging. Gamers can never get enough of batteries and cables, so it’s a reliable and sure-fire gift.

The festive season is one of the most important on a gamer’s calendar. Foreseeing Christmas wish lists, all the big-name publishers drop their eagerly awaited games around this time of year, and digital marketplaces launch their end-of-year sales. After hoovering up hundreds of pounds’ worth of games for dirt cheap in the sales, a gamer will need increased storage space for it all.

A year’s past since the latest generation of consoles launched – the PlayStation 5 and Xbox Series S/X – and their limited storage capacity remains one of their biggest point of contention. When newly released games weigh in at over a whopping 100GB, their build-in drives simply don’t cut it. Fortunately, the console manufacturers have seen fit to release slot-in expansion cards and push out firmware-level updates to enable the installation of aftermarket solid-state drives (SSD).

For Xbox Series S/X, it’s easy. Pop one of these officially licensed Seagate SSDs into the back of the console for a plug-and-play experience. For PlayStation, however, that’s where it gets trickier. If you’re picking up an aftermarket SSD, it must match or exceed the internal drive’s super-fast speed. For an in-depth explanation and guidance on compatible drives, check out our guide on installing an SSD in a PlayStation 5. We’ve got two suggestions for drives we know that’ll work as we’ve tested them ourselves on the Ebuyer YouTube – the Seagate FireCuda 530 and WD Black SN850 – videos above!