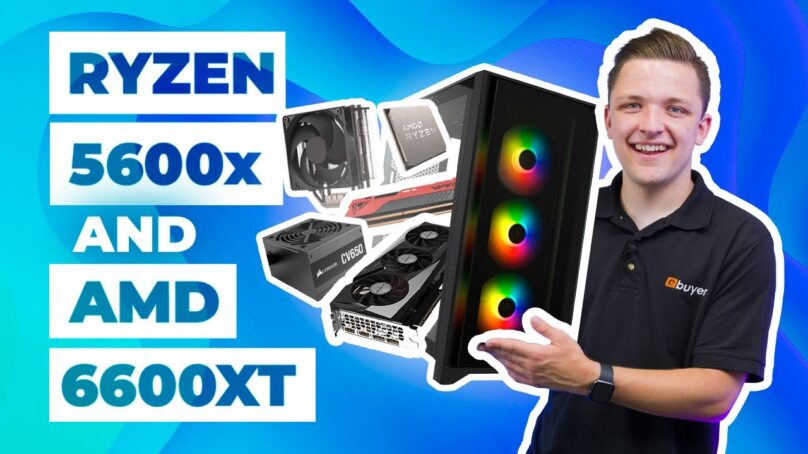 It’s the New Year, and 2022’s slate of releases has us itching to build a gaming PC to handle them all. Elden Ring, Starfield and a whole lot more – this year’s stacked with big-name releases that we’ve waited years for, so now’s the perfect time to build a PC in eager preparation.

We could go completely balls-to-the-wall and build an NVIDIA GeForce RTX 3090-equipped gaming PC for an uncompromised gaming experience at maximum graphical pre-sets, but as detailed in ‘Gaming In 2022 – What You Need To Know’, a high-end graphics card continues to be prohibitively expensive for gaming in 2022. One card’s price tag can exceed the rest of an entire PC build!

As such, we’ve scoured Ebuyer HQ with guest presenter James and come up with our favourite gaming-grade hardware that’ll make for an awesome future-proofed gaming PC for 2022 and even beyond, at an approachable price. In today’s hardware climate of out-of-stock notices and grossly over-inflated prices, our intention is to build a PC that’s feasible for the average consumer.

Let’s quickly run though our component choices, assemble them (check out the video below for a slick time-lapse) and test out the performance of the completed PC build in a couple games – Splitgate and Apex Legends.

Want to build this PC for yourself? We’ve included relevant links to Ebuyer throughout this blog and in the video’s description – make sure to check them out.

As one of 2021’s most popular CPUs on the market due to its outrageously good bang-for-buck performance, the AMD Ryzen 5600X remains a strong contender heading into 2022. If gaming is your primary concern for a PC build, you can’t go wrong with 6 cores and 12 threads boosting up 4.6GHz straight out of the box.

Speaking of, AMD’s Wraith Stealth comes included and does a surprisingly decent job for a stock cooler at regulating the heat produced as a by-product of this powerful CPU. However, as the CPU comes unlocked for overclocking and to sustain boost for the longest duration, we’ve opted for an aftermarket CPU cooler.

While the multi-threaded performance of the AMD Ryzen 5600X is well-suited for its price category, if you’re interested in simultaneously live-streaming your gaming or content creation, consider stepping up to a Ryzen 7 or Ryzen 9 CPU.

To ensure we’re squeezing out the utmost performance from our PC build’s CPU, here’s our aftermarket CPU cooler. The Cooler Master Hyper 212 is famed among PC gamers for good reasons.

It’s a cost-effective cooling solution that’s an ample improvement over a stocker cooler, with an included 120MM fan and an easier mounting mechanism than most bulky aftermarket CPU coolers. For its cooling performance, it’s relatively slim and doesn’t inconveniently block screw holes and DIMM slots. Check out ‘PC Cooling – What You Need To Know’ to learn more about the importance of a stock cooler vs an aftermarket cooler.

This cooler has circulated online communities for years now, receiving iterations along the way. For our PC build, the ‘Black Edition’ with its gunmetal grey finish fits in nicely, but there’s also an ‘RGB Edition’ available over at Ebuyer for a less stealthy appearance.

This Patriot Viper Elite II memory kit consists of two 8GB DDR4 DIMMs – or ‘sticks’ – for a total of 16GB system memory. Running in dual-channel mode at 3,200MHz, this is the ideal sweet-spot for any PC build, but particularly an AMD Ryzen-based one as they’re quite dependant on fast RAM.

It comes with stylised red heat spreaders, which we’ll tie in with the rest of the PC build’s RGB.

Motherboard naming conventions are always quite a mouthful, but this ASUS TUF Gaming B450M-PRO II has the features we need. With support for the latest AMD Ryzen CPUs on an updated BIOS revision, four DIMM slots for our dual-channel memory and an M.2 slot for our solid-state drive.

A rugged, gamer-influenced design and ASUS Aura Sync support are welcomed customisation extras to round out the package.

Now for the PC build’s main showcase, the AMD Radeon RX 6600 XT from ASUS. It features prominently as for a gaming-focused PC build, the graphics card is undoubtedly the most crucial component. Engineered on the latest RDNA 2 architecture – codenamed Big Navi – it delivered great performance at a 1080P resolution in 2021 and should do the same for 2022’s biggest releases. For esports-focused, and less intensive, older games the RX 6600 XT can pull double-duty as a 1440P card too.

It has 8GB of video memory so you can load up on high-res textures and enjoy a stutter-free experience – 4GB and 6GB cards are struggling as we advance further into the next generation of gaming – and only requires a single 8-pin power connector. The dual-fan design and full-metal backplate helps dissipate heat, keeping up the card’s 2607MHz boost clock for optimal performance and to support the reassuringly weighty heatsink.

For the non-XT variant of the 6600 that’s slightly cheaper, check out ‘Sapphire Pulse RX 6600 Unboxing & Benchmarks’.

In terms of storage, we figured we’d push the boat out and indulge in a PCIe 4.0 NVMe solid-state drive – the WD Black SN850 – running at blisteringly-fast speeds of up to 7,000MB/s read and 5,300MB/s write. Frankly, today’s motherboard choice doesn’t even support PCIe 4.0 drives, only PCIe 3.0 ones. Regardless, this drive will function properly, albeit capped at last-gen speeds.

This may seem like a glaring oversight on our part – but it’s all about future-proofing. Even held back by the current motherboard’s PCIe 3.0 standard it’s plenty fast enough for gaming. Plus, when it comes time to upgrade your PC build later down the road, you can upgrade to a PCIe 4.0-equipped motherboard and carry forward your existing drive to unlock its maximum potential.

If you’re looking to save a bit of cash on this PC build, you could step down to a PCIe 3.0-powered drive and not lose too much performance in the present.

To learn more about this drive, check out for a video above and blog below for an unboxing and testing of the WD Black SN850 equipped with a heatsink.

Although this Corsair CV650 is a budget-orientated unit from the renowned line-up of Corsair power supplies, it’s rated at 80 PLUS Bronze for guaranteed power efficiency over years of use.

As a no-frills unit, you won’t find any flashy RGB lighting, but the black powder-coated casing and sleeved cabling ties tightly with our all-black CPU cooler and rugged motherboard. It’s 650W which is more than adequate for our PC build’s hardware and gives us some headroom for upgrades and non-modular. It does exactly what we expect from a high-quality PSU.

You can spend a bit more on your PSU to make cable management easier – Corsair’s fully-modular CX-F range comes recommended – but this choice helps us achieve the best bang-for-buck while ensuring power and reliability.

Frankly, guest presenter James has splashed out on the computer case as he’s a self-confessed Corsair fanboy. As it houses the hardware and dictates airflow, a case can impact performance if we’re strictly speaking. However, on a budget it’s wiser to reinvest the savings from a cheaper case into a higher-end graphics card, the returns will be much larger.

Neutron Lab offer a line-up of great values cases, which we’ve covered extensively on the Ebuyer Gaming Hub and Ebuyer YouTube channel. When it comes to cases, there’s no one ‘right’ or ‘wrong’ answer as there’s so many choices catering to a broad range of price tags – Ebuyer stocks over 100 mid-tower cases alone! As long as it suits your style, fits your set-up and has ample airflow.

That being said, the Corsair iCUE 4000X RGB is going to look and perform fantastic for our PC build. It includes 3 pre-installed 120MM case fans addressable via Corsair’s iCue software, a tool-free tempered glass panel for peering at your PC build’s hardware and an up-to-date I/O panel including a USB-C port.

Watch the main video above for a sped-up montage of guest presenter James assembling the PC build. If you want a more in-depth, step-by-step guide on PC building, check out ‘Neutron Lab Stellar PC Build’. Otherwise, let’s skip straight to the gaming performance!

The first game we’re going to try out on our RX 6600 XT PC build is the wildly popular first-person shooter Splitgate. A brain-melting fusion between Halo and Portal. It’s fast-paced and multi-player, so a high frame rate is a must for matching your opponent’s pace.

On this PC build, guest presenter James describes the frame rate as ‘nothing short of phenomenal’. Throughout the accompanying video, you can see performance metrics in the top left-hand corner of the monitor. Running at 1080P and selecting the ‘Epic’ graphical pre-set with V-Sync off, the frame rate is averaging around 300 frames-per-second. That’s enough to saturate 144Hz and 240Hz high refresh rate gaming monitors.

Next, we’ve loaded up Apex Legend’s 3 Vs. 3 arena mode to test explosive action that’s representative of a worse-case scenario for performance, rather than meandering about an empty battle-royale map. From a technical point of view, the game engine powering Apex Legends is fairly dated and caps out at 144 frames-per-second.

Our frame rate averages around 144 frames-per-second too with GPU utilisation to spare, meaning there’s headroom to crank up the graphical pre-set or resolution to 1440P.

That wraps up our PC Build for gaming in 2022 and beyond. Here’s a list of all the hardware used, available over at Ebuyer.