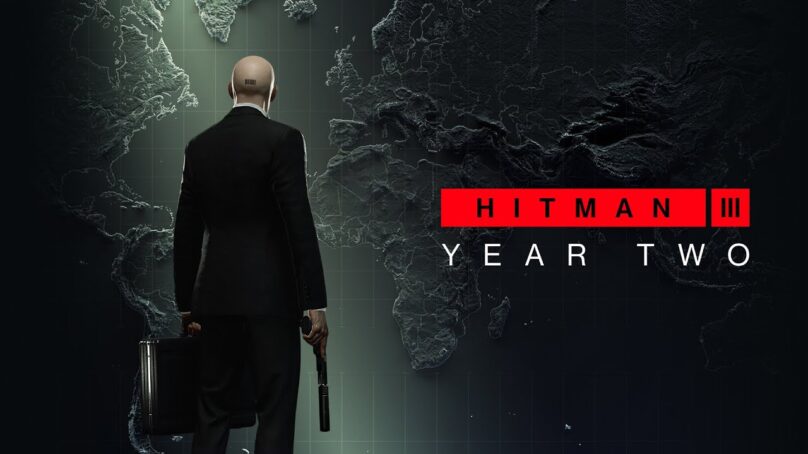 The latest soft reboot of the Hitman franchise – dubbed the ‘World of Assassination’ trilogy – was weirdly experimental for games of a triple-A pedigree.

Over the course of its development cycle, which began in 2016, it has seen; An episodic release schedule for slowly doling out content akin to a TV show, time-gated content for an ostensibly single-player game, the now-independent developer performing a management buyout after their publisher ceased funding and more.

This turbulent delivery has clouded otherwise amazing games, but developer IO Interactive is looking to set the record straight in year 2 of Hitman 3 with these new announcements.

As the trilogy draws to a close, fans were expecting IO Interactive to restore elapsed content from the highly contentious ‘Elusive Target’ mode in an endlessly replayable form.

Elusive Target missions are available for a limited time and can be attempted only once. If you fail – or simply miss the opportunity to play – the mission is effectively erased from existence.

The heightened stakes and exhausting prep of an Elusive Target mission made it so enthralling, but was actively removing content from the game worth it?

Elusive Target Arcade seeks to rectify this clash of interests. It’s a permanent addition to the game and brings back expired targets with a remixed twist.

Your goal is no longer to eliminate one all-important target. Now, you must string together a consecutive series of kills, one mission after another. Fail at any time, and you’re booted out to the main menu and must wait 12 real-time hours to give it another shot.

This strict punishment means you can’t blindly quick-save your way through, and forces you to mull over your mistakes without burning real people’s work you paid for. The mode will be launching January 20th.

Over the years of playing Hitman, one of the more irritating aspects was all the exclusive behind-the-scenes deals tied to the game. As Hitman 3 enters its 2nd year post-release, we’re clearly seeing some year-long deals end. So, anyone – regardless of platform – can enjoy all Hitman 3 has to offer.

Virtual reality support – previously only on PlayStation VR – will be launching January 20th on PC with further enhancements. As detailed in ‘PlayStation VR2 Specs Revealed’, Sony’s first-generation VR headset was severely lacking in regard to its webcam-based tracking.

The game no longer requires the use of a traditional two-handed controller. You can now hold VR controllers and each hand and have your one-to-one movements represented in-game.

Instead of relying on a on-screen prompt and a pre-canned animation to dictate the action, everything’s physicalised. Gently creak open doors, smash bottles over an enemy’s head or slap them into unconsciousness – VR looks fundamentally transformative.

Most excitingly, with the way Hitman 3 is structured, you can play Hitman 1 and 2 in VR too. In a post-Half-Life: Alyx barren landscape of high-end VR releases, that’s three fully-fledged games of a triple-A quality you can play from beginning to end in VR.

Since its initial release, IO Interactive has made a number of under-the-hood changes to Hitman 3’s rendering engine and PC gamers will be treated to a number of graphical and performance enhancements later this year.

They’ve added ray-traced shadows and reflections, which should have a noticeable impact on the game’s presentation. Hitman sees you circling the globe to take down the disgustingly rich elite in sky-high penthouse suites in Dubai to fashion shows in Paris. Highly reflective surfaces are everywhere and will be show-stopping demonstration for raytracing, if your rig’s capable.

For extra performance, IO Interactive has partnered with Intel to bring Intel’s AI-enhanced upscaling technology XeSS to the game. As far as we can tell, this’ll be the first publicly available game to implement XeSS and we’re super intrigued to see how it stacks up against NVIDIA’s much-lauded DLSS.

With their weird and convoluted launch strategies now behind them, IO Interactive has seen fit to release ‘Hitman Trilogy’, packing the content of all three games into one.

For new players (who’ve found Hitman unapproachable in the past as it required a spreadsheet to buy the ‘right’ version of the game) this is now the recommended way to play. No need to worry about ‘Silver’ vs ‘Gold’ editions of each game or buying individual level packs.

HITMAN Trilogy will be launching January 20th for PlayStation 4 and 5, Xbox One and Xbox Series X/S and on PC via Steam or Epic Games Store. It’s also launching on Xbox Game Pass for Console and PC the same day.