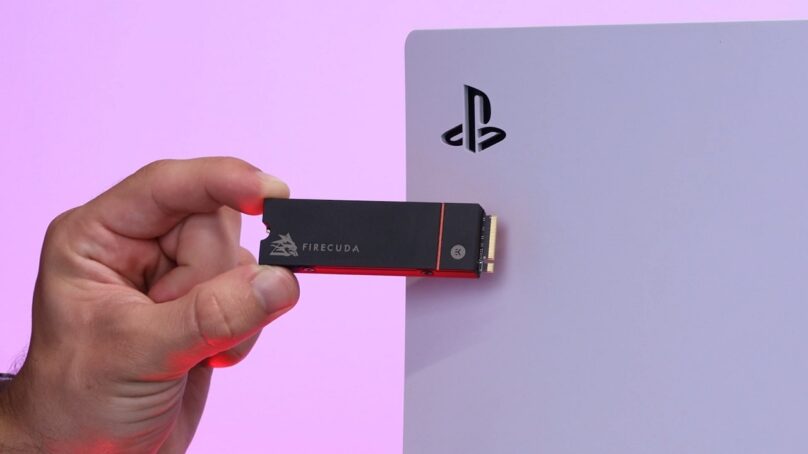 Images in the article provided by: PlayStation

Update: PlayStation has officially released a support article regarding how to add an M.2 SSD to a PlayStation 5 console.

The Sony PlayStation 5 consoles, both the standard and disk-less digital edition, come with a bespoke and blistering fast 825GB solid-state drive.

And that on-the-box ‘825GB’ storage capacity? In reality, after you’ve taken into account pre-installed software like the operating system, the user-accessible amount disappointingly dwindles down to only 667GB. Over 150GB lobbed clean off before even booting up the console for the first time.

This seems tolerable initially, but next-generation titles are heavily bloated with high-resolution textures, uncompressed assets and movie length cut-scenes. You’ll fill up the internal drive in no time – if you haven’t already – leaving you contending with constant ‘storage full’ reminders.

Thankfully, the PlayStation 5 features a dedicated bay for M.2 NVMe solid-state drive storage expansion. Why not save yourself from the headache of a full drive and upgrade the storage capacity of your PlayStation 5? We’ll walk you through the installation process, step-by-step.

Installing an SSD in a PlayStation 5 is a relatively streamlined process, only requiring two tools: a flat-head screwdriver and a Philips-head/cross-head screwdriver. Fortunately, there’s no finicky, delicate parts or cable management to worry about.

However, the specification of the drive itself is extremely important. Sony strongly recommends using an M.2 NVMe solid-state drive with a heat sink or heat transfer sheet, which Ebuyer stocks.

With blistering fast performance up to 7,300MBs, long-lasting reliability and a built-in heatsink, the Seagate FireCuda 530 easily exceeds the PS5’s requirements, making it the ultimate expandable storage solution in 2021 for compatible gaming consoles and gaming PCs.

We’ll quickly cover how to access the bay, install the SSD and put the system back together again. Installation will only take a few minutes, but before we start, ensure the system’s powered off and unplugged from the socket.

If you’ve got the base pre-attached for a vertically-orientated PlayStation 5, we’ll need to remove it before proceeding.

Here’s where the flat-head screwdriver comes in handy. Untightening the screw from the base, remember the phrase: ‘left loosey, righty tighty’.

You can do the rest by hand after a few turns. To make sure you don’t accidentally misplace this screw, Sony’s thought ahead, including a small, but much appreciated bay to store the screw on the underside of the stand.

Once loosened, do the rest by hand. So you don’t accidentally misplace this screw, Sony’s planned ahead. On the under-side of the stand, there’s a small but much-appreciated slot to stow away the screw.

This next part’s the trickiest part of the whole process, only because it feels a little awkward – removing a side panel. Specifically, the one without the PlayStation logo in the top-left corner.

To start, place the PlayStation-branded panel flat against the table in a landscape orientation, with the plain-white panel facing up towards you. With one hand, firmly grip the top-right corner conveniently curving upwards, and support the base of the console with your other hand.

Then, simply pull up-and-backwards simultaneously until the panel pops off. It may feel like you’re forcefully prying the plastics, but it shouldn’t require too much force.

We’ve now gained access to the PlayStation 5 internals. Everything’s protected by metallic shielding, so we can’t catch a glimpse of the powerful components.  But located near the fan assembly, there’s a grey, rectangular plate. Here’s what we’re interested in – expansion bay.

It’s secured in place by a PlayStation-branded screw. A subtle detail which Sony expected people to, eventually, stumble upon. Now, we’ll need our Philips-head/cross-head screwdriver for this job. Remove the screw and the plate and store them somewhere safe, as there’s no nifty compartment like the base, revealing the hollow content of the bay, primed for expansion.

Removing the screw and spacer

The bay’s fairly roomy for a slim, bare-bones M.2 NVMe solid-state drive. This allows drives with beefier heat sinks to fit, but double-check it won’t be too large. While it’s empty, take note of the screw holes. NVMe solid-state drives come in all sorts of sizes. Some longer, some stubbier. These holes are for safely fastening down the drive, no matters its size.

There’s one pre-installed screw, with a spacer underneath. Remove the screw and place the space into a hole corresponding to your M.2 NVMe solid-state drive’s length.

Don’t worry, as long as you’re away of the offset and one-way design of the connection, an M.2 drive is one of the hardest installations to mess up. Line up notch-to-notch, approach the slot at a slight diagonal angle and gradually insert into place. It’ll spring up, so fasten it down with the screw if the drive’s resting perfectly flat against the spacer.

If the drive isn’t flush, don’t proceed, something’s obstructing the installation. An oversized cooler is the likely culprit. Attempting to force it might damage both the drive and the console’s connector.

Putting the console back together

If everything’s clear, that’s it! You’ve installed an SSD in a PlayStation 5. Now, we just need to reverse the process.

Assuming there’s enough clearance for the heatsink, latch the metal plate into place and re-screw. Now, to slide the panel back on. Line up the latches with the groves, give it a light tap, and it’ll snap back into place.

Of course, remount the stand if you removed it previously, but that’s the entire process!

If you’re looking for the right drive for your system, check out our range of PlayStation 5 compatible solid-state drives, over at Ebuyer.

Looking for recently announced games to fill up your brand-new SSD? Check our our highlights of PlayStation’s State of Play.

Or, not interested in console gaming? Following along with our recent Neutron Lab Stellar PC build guide.