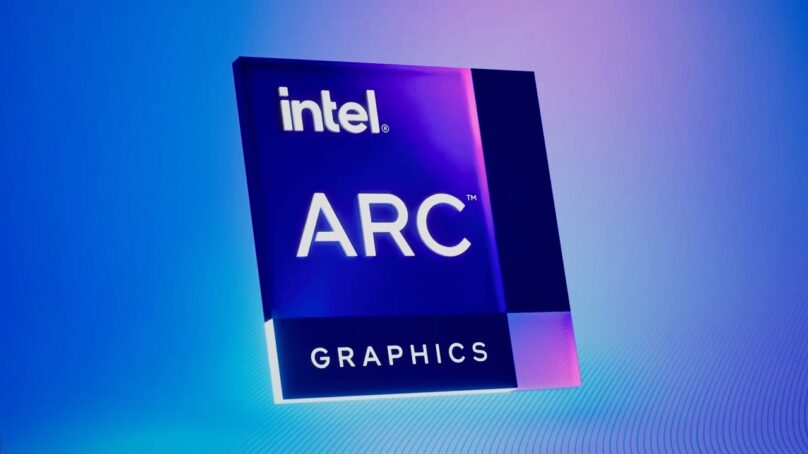 When you think of a graphics card, two companies spring to mind – NVIDIA and AMD. But that’s about to change, as a new challenger approaches – Intel. Yes, this well-know CPU manufacturer enters the fray with Intel Arc, their first discrete graphics card brand.

While Intel’s had low-powered integrated graphics on their CPUs for well over a decade, gaming grade GPUs have been sorely absent since the cancellation of project ‘Larrabee’ in 2010.

After months of teasers and behind-the-scenes developer talks, Intel has unveiled their plans to bring Intel Arc to market over the course of 2022. Here’s what you need to know about Intel Arc, including models, release dates, key features and more.

Intel’s mainly focused on laptop-class GPUs, but they’ve also teased an Intel Arc desktop graphics card launching in summer. For now, all they’ve shared is a short snippet of the card’s design: dual-axial fans, thick cooling and more. Check out the video, embedded below. Interestingly, we couldn’t glimpse the card’s power connector, so even a suspicion of power draw remains a mystery.

Rated for only 25-35W and 35-50W of power consumption respectively, don’t expect mind-blowing performance from Arc 3. Intel has shown the Intel Arc A370M performing slightly above 60 frames-per-second at a medium graphic pre-set over a range of triple-A games, including Hitman 3 and Doom Eternal. Arc 3 looks like a great alternative to integrated graphics for the strict power envelops of thin-and-light devices.

It’s Arc 5 and Arc 7 where we’ll see “advanced gaming” and “high-performance gaming” accordingly, promising power that’ll give NVIDIA and AMD a run for their money.

That power consumption is creeping up towards the high-end of gaming laptop GPUs, so we’re excited to see if Intel has already got a card that roughly equates to an RTX 3070 or even RTX 3080. The VRAM shouldn’t be ingored either, 12GB and 16GB is considerably more than what’s current laptops, making Intel Arc 7-powered laptops great machines for on-the-go content creation.

Intel Arc A-Series graphics cards are built on Intel’s new XeHPG (Xe High Performance Graphics) architecture. Built from the ground up, it isn’t a simple continuation of their integrated graphics.

Even though this is Intel’s first generation attempt at a discrete graphics card, these technologies put them toe-to-toe with NVIDIA and ahead of AMD, who don’t have an AI-enhanced image reconstruction technique.

As detailed in our blog Why should I buy a NVIDIA GeForce RTX 30 Series GPU…, reconstruction is an essential component of modern rendering. A new demo of XeSS was show, and while it shows a clear improvement over non-XeSS rendering, judgement is reversed for retail, playable games as YouTube compression makes for an unfair test.

As it’s tailored for their architecture, Intel XeHPG-powered graphics cards should achieve the best results from XeSS. However, there are plans to support other manufacturer’s cards down the road (via a DP4A instruction set) and to even go open source.

At launch, over 20 games will feature XeSS, including Ghostwire: Tokyo, Death Stranding: Director’s Cut and Hitman 3. Though, Intel plans to continue working with game developers to strengthen adoption of XeSS in their games.

After such a long wait, Intel’s laptop-focused reveal might feel underwhelming – where’s the watt-guzzling desktop graphics card to show what Intel are made of?

However, this steady and considered roll-out lets Intel test the waters, ensuring their drivers and technologies are ready for prime time. Launch Arc 3 now and get ready for the high-performance graphics cards in the summer. We can’t wait to see how an Intel-powered graphics card stacks up against NVIDIA and AMD.