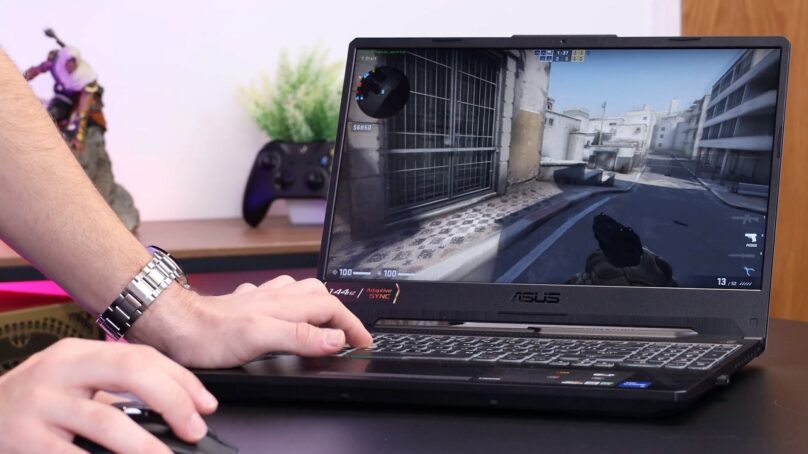 By itself, the money you’d save on a do-it-yourself rig may be enough to reinvest into a cheap laptop. On online forums, whenever someone mentions a gaming laptop, they’re inundated with replies saying they shouldn’t buy a gaming laptop. Instead, they should build a gaming desktop and buy a non-gaming laptop separately, for roughly the same total cost.

It’s worth considering, as realistically, a gaming laptop isn’t very good for off-charge, on-the-go use. Having to power and cool high-performance hardware, gaming laptops are heavier than normal laptops and their batteries don’t last nearly as long.

However, it’s not always as cut and dry as this. Regarding price, a gaming laptop does have a few points in its favour. A gaming laptop is shipped right to your door as one whole unit, so you won’t have to check each component’s compatibility and assemble it. It’s more expensive than a gaming desktop, but this price premium’s worth it for same as it saves time and a potential headache.

You’ve also got to consider sales on gaming laptops. When a new model of gaming laptop releases, last year’s model (that’s still performant) will go on sale at a heavily discounted price. You don’t tend to see such steep discounts on components, RTX 30 Series graphics cards have held their value for two years post launch, for example.

While the gap shrinks year after year, a gaming desktop is always going to be faster than a gaming laptop. There’s no avoiding it, as a desktop PC has more room, more power, and a heftier cooling solution to work with. A vital distinction to make is that a laptop GPU is not equal nor comparable to a desktop GPU of the same name. Often, they don’t use the same chip, never mind when power consumption and clock speed is factored into the equation.

So, the laptop GPU consumes less than half the power of the desktop GPU, that’s expected from a portable form-factor device. However, with few cores and slower VRAM, can you really call it a ‘RTX 3080’?

And notice how we said the laptop RTX 3080 is rated at ‘up to’ 150W. That’s another thing you’ve got to look out for when buying a game laptop, as each one sends varying amounts of power to the GPU. You might have two ‘RTX 3080’ gaming laptops, but one’s rated for 80W while the other’s rated for 150W, resulting in a huge performance disparity. This can make purchasing a gaming laptop quite confusing, as you can’t assume one RTX 3080 gaming laptop performs like another.

Squishing such high-performance hardware into a cramped space makes a gaming laptop prone to overheating. Don’t worry, while a gaming laptop gets hot, it won’t irreversibly damage itself. There are procedures in place to reign in thermals when they approach a component’s limit, such as dynamic frequency scaling, also known as ‘thermal throttling’. This reduces a component’s clock speed when it starts to overheat, until it reaches a manageable temperature. This helps keep thermals in check, but it negatively impacts performance.

Dynamic frequency scaling affects a gaming desktop too, but the problem is how frequently it occurs on a gaming laptop. In a portable form-factor, they simply don’t have enough thermal mass to withstand a high temperature and are overwhelmed. Load up a hardware-intensive AAA game on a gaming laptop and it’ll hit 100°C and trigger throttling in minutes. You can purchase a cooling pad and ramp up gaming laptop’s fans to mitigate thermals to a degree, but then it’ll also be deafeningly loud.

Whereas a spacious, high airflow gaming desktop equipped with an all-in-one liquid cooler and a three-slot, three-fan graphics card runs comfortably at a high boost clock and a low temperature.

You’ve got to consider how much you’ll end up using a gaming laptop’s portability in practice, and whether it’s worth these trade-offs. If you go round a mate’s house every weekend for a LAN party, of course a gaming laptop makes sense, it’s an ideal scenario for one. Perhaps you’re a uni student who doesn’t want to leave their PC behind at the end of a term. It’s way easier to bring home a gaming laptop; just sling it in a backpack. Or maybe you frequently travel up and won the country and want a gaming-capable device to accompany your journey.

In these examples, a gaming laptop easily validates itself. If you know you’re going to be moving around a lot, a portable gaming laptop becomes invaluable. That’s not to say you can’t transport a gaming desktop, but it’s far from convenient and requires a prep to ensure things aren’t jostled loose. You don’t want a weighty desktop GPU to rip out of a motherboard’s PCIe socket when you go over a bump.

A gaming laptop is an extremely versatile, all-in-one device. It not only includes gaming-grade hardware in a portable form-factor, but a built-in monitor, keyboard, touchpad, and a wealth of I/O as well. This all fits into a backpack, a gaming desktop set-up can’t compete. Even when you’re not out and about, a versatile gaming laptop comes in handy in the home. If you want to kick back with a wireless controller and play your games on a TV or nestle up in bed, a gaming laptop and its charger easily unplugs and can be hooked up again in seconds.

Chasing the slimmest profile, more and more non-gaming laptops are moving towards soldered, non-upgradeable components, such as solid-state storage embedded onto the laptop’s mainboard. At least most gaming laptops have user-accessible DIMM slots for memory upgrades and SATA/M.2 slots for storage upgrade, but it doesn’t compare to a gaming desktop.

Core components, like the graphics card, aren’t upgradeable on a gaming laptop. When a component starts to show its age on a gaming desktop, however, you don’t have to throw the whole PC out and buy a brand-new one. You can add it over time; upgrade from a stock cooler to an aftermarket cooler, swap out a GPU for a faster model, replace a faulty fan. In comparison, a gaming laptop’s upgrade path is rather short.

Coming from one manufacturer, a gaming laptop has one point of contact for straightforward support, returns and repairs. Whereas you’d have to tediously chase up contacts for each and every component of a self-build gaming desktop. It’s a two-sided coin, however, as if one thing’s faulty on a gaming laptop you’d have to send the entire device away for repairs. This leaves you without your PC for an unknown amount of time; where’s it being shipped off to, how long will it take? At least on a gaming desktop, if it’s just the graphics card that’s faulty, you can continue using your PC with integrated graphics or an old GPU while you wait.

And that’s when you’re under warranty. If a gaming laptop goes faulty outside of it, your options are limited. You either pay for an expensive out-of-warranty repair, take it to a third-party repair shop, or scour auction sites for obscure, non-standard parts you can’t find online easily. Compared to a gaming desktop, it’s considerably harder to replace even something as trivial as a fan. And if a core component breaks, it’s pretty much game over.