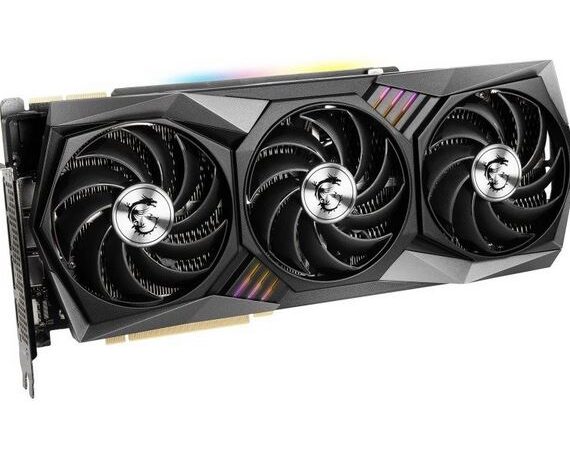 The exciting new series of graphics cards from NVIDIA is causing a bit of a stir – and here at Ebuyer we’re mightily impressed! In this video, guest-presenter GeekaWhat looks at the MSI RTX 3090 Gaming X Trio card and highlights some of its features. He explains why you really need this card if you’re serious about your gaming.

Based on the Ampere architecture from NVIDIA, this card is a great choice for both 4K and 8K gaming. for super-high frame rate 1440p / 60fps. It’s perfect for those high-octane action-packed 4K titles.

With 24GB of GDDR6X memory, you’ll be able to crank textures up to max while you’re playing your favourite titles, but you’ll still get fantastic all-round performance. With NVIDIA’s ray tracing technology, the card ‘reimagines’ the way light is dealt with in games.

By tracing the paths of light from their source, the ray tracing ensures that reflections and shadows in games are highly realistic. It all leads to a far more immersive gaming experience.

The RTX 3080 also uses DLSS technology, which is AI-powered resolution scaling. This means you can get the visual fidelity of 4K or 8K while also getting higher frame-rates you’d find at, say 1440p.

The 3090 is a great-looking card, with three large fans to keep your GPU cool during those mammoth gaming sessions. There’s a large metal backplate, which helps to prevent GPU sag, and an RGB light-zone on top which can be controlled through MSI software.

The 3090 also has support for NVIDIA Reflex, which streamlines the game engine and GPU workflows – which means your own reaction times are much more of a factor in gaming as input lag is minimised. It gives you the edge!

You can buy the fantastic RTX 3090 either as a standalone card from Ebuyer, or already installed as part of one of AlphaSync’s pre-built systems.