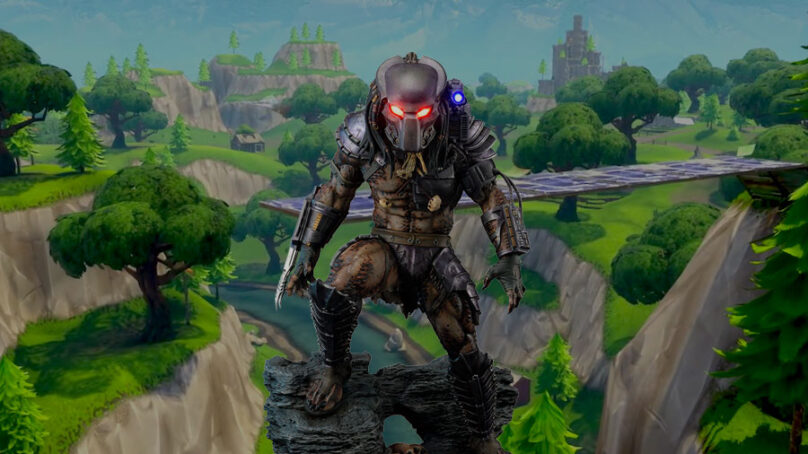 Even though some years have passed since Fortnite’s release, it’s still one of the most played online games. One of the great things about Fortnite is how the game keeps rolling out new content. We’ve also seen Fortnite collaborating with many other popular game titles or even with the music industry.

Predator is now available in Fortnite in the form of a skin that can be equipped on your character. For those of you unaware, Predator is one of the iconic characters from the Alien vs Predator series.

Just like many other skins in Fortnite, Predator is listed as a reward from one of the many challenges in the Battle Pass. Regardless of the character you are currently using in Fortnite, all you will have to do is to equip this skin on your character. Equipping it will allow you to deploy on the battlefield as the Predator himself.

What’s even better is that the season pass also brings in other cosmetic items from the series. Here is an overview of what you can unlock through the latest Battle Pass:

These are all the mystery rewards that come from the latest Predator x Fortnite crossover. But it isn’t that easy to get them. In fact, you will have to complete a new questline called the Jungle Hunter Quests. Completing it will result in you being rewarded with all these items.

As we mentioned above, completion of Jungle Hunter Quests challenges is compulsory for unlocking these rewards. However, one important thing to note is that the quest is only available for players that own the latest Battle Pass.

Unfortunately, players that haven’t bought the Season 5 Battle Pass won’t be able to enjoy the skin. But for those lucky enough to own it the quest challenges themselves are pretty easy. Here are the things that you will need to do to unlock all of these items:

Managing to complete all these challenges should help you achieve most of the rewards that are coming with the Predator crossover. If you do have a few extra pounds with you, then you can simply skip all of these challenges, and buy all of the items.

Encountering Predator as a Mini-Boss

Just like many other past crossovers in Fortnite, Predator also appears as a mini-boss in Fortnite. Defeating the mini-boss isn’t easy, but doing so results in blessing the player with a cool new utility item. If you do manage to defeat the Predator, you’ll be rewarded with the Predator’s own cloaking device.

The cloaking device acts as a very powerful utility item that will enable you to go invisible for around 30 seconds. In case you didn’t know, this is Predator’s own signature ability in the movie series. As overpowered as the ability may sound, you will still have to defeat the mini-boss first, in order to obtain it.

In the right hands, this cloaking device can be exactly what a player needs for turning the tide of battle. It’s most definitely a challenge that will need to be overcome by the player if he wants to get his hands on the Predator skin, as well as the cloaking device.

While this season’s Battle Pass was already a pretty good deal, the addition of the Predator has only made it more enticing. Recently, a brand-new trailer for the Predator skin in Fortnite was also released. If you are still unsure about whether you should get the Battle Pass, then you should check out the trailer.

There is no doubt that Fortnite’s crossover with the Predator series has many fans hyped up for the update. This season’s Battle Pass has already had some of the biggest crossovers that we have seen in Fortnite that includes Kratos from God of War as well as Master Chief from the Halo series.

Surprisingly, we still have a few weeks left before the season ends. Will we see another famous character make his way to this season’s Battle Pass? Be sure to let us know what you think.