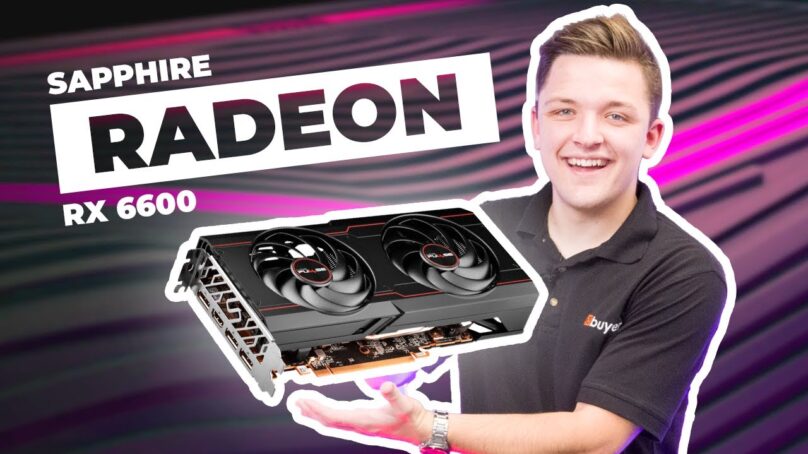 Here on the Ebuyer Gaming Hub and over on the Ebuyer YouTube Channel (get subscribed!) we’ve covered a whole lot of blisteringly fast graphics cards in gaming-grade desktops PCs and laptops, like the ASUS ROG Strix RX 6900 XT. But… what if you’re after a card that’s somewhat attainable, especially during these turbulent times of seemingly never-ending hardware shortages?

The mind-melting specs of wonderfully excessive graphics cards like the NVIDIA GeForce RTX 3090 or even AMD’s own RX 6900 XT are undoubtedly ogle-worthy, but they’re accompanied by higher and higher price tags even at ‘normal’ MSRP. These are cards for completely maxed-out gaming experiences at 4K and 120FPS. A humble, affordable 1080P-tier card has been sorely lacking. But the RX 6600 is here to satisfy this segment.

AMD is well known for their Ryzen CPUs, but their GPU department’s making an unignorable recovery recently. This non-XT variant of the 6600. While both the 6600 and 6600XT use the same Navi 23 chip and come with 8GB of VRAM, the 6600 has slightly less compute units – 32 Vs. 28 – and clock speeds. This manifests itself as 15% less performance, on average, but the RX 6600 is a perfectly adequate card for 1080P gaming.

Unboxing this particular model of AMD Radeon RX 6600, guest presenter James from GeekAWhat (check it out, here) is keen to see what form factor Sapphire has opted for.

From Sapphire’s own spec-sheet for the RX 6600, they’ve pegged the power requirement at only 140W for typical power consumption, with a minimum recommendation of a 500W power supply unit. For a gaming-grade card, this is refreshingly energy-efficient for a change. As you progress further into the line-up of graphics card from AMD’s Radeon RX 6000 Series– and staunch competitor NVIDIA’s GeForce RTX 30 Series – they progressively draw more power, consuming in excess of 350W.

Due to this card’s relatively low power requirement, the cooling solution doesn’t need to be the three-slot monstrosity we’ve become accustomed to. Judging by this card’s box, we’d except a compacted two-fan from factor and that’s exactly what’s inside.

No doubt Sapphire could’ve even got away with only one fan, but an extra is greatly appreciated for keeping temperatures low for cool operation. You won’t have to worry about thermal throttling – as detailed in our guide on PC cooling – and the acoustic profile of two slower spinning fans is highly preferable over one fan desperately trying to displace the same amount of air.

These edge-to-edge fans take up most of the plastic shroud, with the card’s size coming in at only 19.3cm long, 12cm tall and 4cm wide. It’ll easily slot into many PC builds – even small form factor computer cases and those with thick all-in-one water cooler radiators – with a reassuring amount of clearance. And the miniscule, single 8-pin power draw means you likely won’t need to upgrade your power supply unit, either!

There’s also a full-metal backplate that passes James’s ‘knock test’ to support the weight of the card hanging from a motherboard’s PCIe socket – the MSI B550 Unify-X we covered recently has an reinforced socket for further support.

A back plate also helps in dissipating heat, so it’s a much-welcomed addition. Some manufactures skimp on this step, opting for a no-frills plastic construction or forgoing one entirely to save themselves a bit of cash. Sapphire hasn’t, and we appreciate that!

While there’s no extravagant (or annoying, according to your taste…) RGB lighting to be found, there’s a cut-out in the middle of the back plate showcasing all the tightly packed components of the GPU die’s rear side, with red ‘pulse’ striking through it.

Rounding off the unboxing, the Sapphire Pulse RX 6600 comes equipped with three DisplayPorts and a single HDMI for plugging in a multi-monitor set-up with ease. While we’d categories it as a 1080P card, it’s capable of driving a 1440P or even 4K display for day-to-day computer operation – and maybe even some lighter and less performance-intensive e-sports games, as tested below!

The first game to gauge the performance of the Sapphire Pulse RX 6600 is good old Grand Theft Auto 5. We’ll admit, it’s a slightly older game and isn’t as popular as a free-to-play battle royale like Apex Legends.

However, the built-in benchmarking mode is such a useful resource for producing a repeatable result to compare against another graphics card. We’ve used Grand Theft Auto 5 in other videos for this exact reason, so you have something to work from to make a more informed purchasing decision.

For graphical pre-sets, we’re using ‘normal’ across the board – broadly equivalent to medium in other games –with a Full HD resolution. Check out the accompanying video for a full-breakdown. With Grand Theft Auto 5, there’s an upper ceiling of around 190 frames-per-second due to an engine limitation, so even the highest-end hardware won’t go higher than this.

It’s also quite a scalable game – normal is a solid foundation, but if you’d like greater visual fidelity or frame rates, you can toggle the pre-sets higher and lower accordingly. As soon as the benchmark begins, we’ve immediately hit the engine limitation – 187.5FPS to be precise!

Obviously, we should’ve given the Sapphire Pulse RX 6600 more credit, so let’s tune the pre-sets up to ‘high’ and adjust the population and distance sliders. Going from normal to high is a considerable leap in fidelity and James expected around 60-70FPS, but again this was far too conservative.

Re-running the benchmark, the frame rate is somehow topping out at 185.7FPS, with some slight dips when the scene quickly transitions from day to night. Maybe the Sapphire Pulse 6600 is more of a 1440P-grade card than we once anticipated.

Since this’ll be our last benchmark, let’s crank up the pre-sets yet again to see if we can budge this stubborn frame rate. Population density, population variety, distance scaling – all maxed out, with ‘very high’ for the rest of the pre-sets. Now, finally, the frame rate’s dropping below 187.5FPS down to around 150FPS.

While a super-high frame rate is ideal for the lowest input latency, Grand Theft Auto 5 is more of a story-driven experience. The heightened fidelity is more suitable and 150FPS is more than enough the saturate most high refresh rate gaming monitor.

AMD hasn’t caught up to NVIDIA in terms of features like real-time raytracing or the AI-enhanced reconstruction techniques of Deep Learning Super Sampling (DLSS), but this result demonstrates their fast performance with rasterised rendering. They’ve also got Smart Access Memory (SAM) and FidelityFX Super Resolution (FSR) up their sleeves, too.

Finally, let’s quickly hop into Apex Legends to test the Sapphire Pulse RX 6600 in a competitive first-person shooter, where a high frame rate is extremely important for split-second reactions times. At a Full HD resolution, the card’s managing a reliably consistent 130FPS with no distracting micro-stutters, tearing or lag – and this was with the ‘high’ graphical pre-sets!

To gain an advantage over the competition, many gamers deliberately knock back some pre-sets to increase frames rates, so expect even greater performance when optimising for maximum performance.