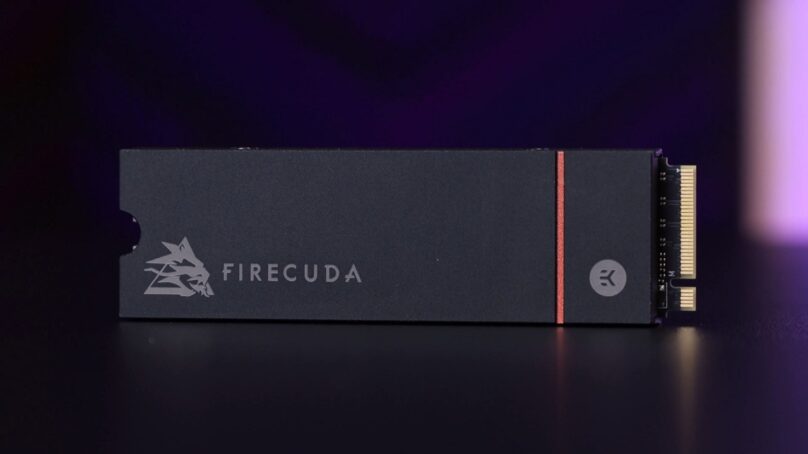 FireCuda 530 packs a punch with blistering fast performance up to 7,3000MB/s reads and 6,900MB/s writes, long-lasting reliability (up to 5,1000TBW) and a built-in heatsink option designed by EKWB. The Seagate FireCuda 530 easily exceeds the PS5’s requirements, making it the ultimate expandable storage solution in 2021 for compatible gaming consoles and gaming PCs.

We’re rapidly approaching PlayStation 5’s first anniversary and storage woes are a growing concern. Leading up to the console’s roll-out, Sony made a lot of its built-in, bespoke solid-state drive. With a PCIe Gen4-powered NVMe drive rated at 5,500Mbps, it wasn’t only a performance boon for gaming consoles, but the impressive specs even rivalled top-tier drives available on PC.

However, the questionable decision was the launch model’s capacity – 825GB. Once you’ve factored in unavoidable hurdles like the operating system, the user-accessible amount is only 667GB. When one next-generation title happily consumes in excess of a hundred gigabytes, ‘storage full’ pop-ups and shuffling about installs become an annoying occurrence.

Locked away for the longest time, the only saving grace was the system’s storage expansion slot. It was outright disabled via firmware up until recently, as off-the-shelf solutions couldn’t match up against the built-in drive – until now.

The Seagate FireCuda 530 solid-state drive is rated up to an eye-watering 7,300MB/s, which is fantastic news for professionals, enthusiast, creators and gamers alike, as all iterations of the FireCuda 530 are fully compatible with the PlayStation 5.

For Seagate to release a drive nearly 2 gigabytes-per-second faster than the PlayStation 5, in little less than a year after it initially launched, is seriously impressive. Handily exceeding the PlayStation 5’s performance requirements, the Seagate FireCuda 530 makes for a dead-simple recommendation for those looking to expand their console’s storage.

Running at 7,300MB/s, the Seagate FireCuda 530 cuts extremely close to the theoretical limit of PCIe 4.0 – the next-generation of connectivity. Taking the fullest advantage of PCIe 4.0 with nearly maxed-out speeds, you’re effectively getting double the performance of PCIe 3.0 NVMe solid-state drives. Whether it’s installed in a PlayStation 5 or a PCIe 4.0-compatible gaming PC, it’ll make quick work of the latest triple-A titles and other demanding applications.

With blazingly fast speeds up to 7,300 MB/s you need to ensure the drive it kept cool and operational. As such, the Seagate Firecuda 530 features a heatsink to efficiently dissipate heat, ensuring it maintains maximum performance and doesn’t hit any thermal limits as it chews through data.

Seagate’s collaborated with EKWB, a market leader for PC water-cooling solutions, to create a compact heatsink for maximum effectiveness under the PlayStation 5’s 11.25mm suggested profile. In the enclosed compartment of the PlayStation 5’s expansion bay, a heatsink is essential – Sony stipulates as such on their solid-state drive support page. Even though the heatsink’s slimmer than other competitor’s options, this doesn’t translate to less dissipation thanks to EKWB’s in-depth technical know-how. The reduced dimensions of the FireCuda 530 allows a gap in-between the heatsink and the enclosure’s cover for cool air to flow over.

For PC users, the EKWB heatsink reduces temperatures far greater than a motherboard’s simplistic M.2 heat shield. The lower profile heatsink will reduce interference with other components, making it one of the most universally compatible high-end NVMe solid-state dries in the market for both PlayStation 5 and PC. The heatsink comes pre-installed, so you don’t have to fiddle around with thermal pads and adhesives, ready for a drop-in installation.  Check out the video below to see how easy it is to install this drive into your PlayStation 5.

Arguably more important than on-paper credentials is a drive’s reliability. Gamers are familiar with the term ‘glass cannon’, where a unit’s lackluster, measly defence is heavily outweighed by their all-out offence. This, unfortunately, is an all-too-common occurrence for some solid-state drives. They’ve got ridiculously fast speeds, but crucially lack endurance to be a viable long-term solution.

The Seagate FireCuda 530 is notably different. Rated for a staggering 5,100 total bytes written lifetime, meaning you could effectively write to and erase 70% of the drive’s contents every day for five years. This is a remarkably good result, considering the intended deployment of this drive. Once you’ve written the game’s content to the drive during the initial install, games aren’t very write-heavy. You’re primarily reading assets right off the drive, not constantly creating fresh data.

For creative professionals utilising high-performance workstation putting their storage devices under more strenuous demands, the FireCuda 530 is the highest endurance option on the market. For further peace of mind, your purchase includes three years of Rescue data recovery services. If anything was unexpectedly lost, Rescue’s industry-leading 95% success rate means your data’s in capable hands.

The Seagate FireCuda 530 is tough and will withstand years of use. This is especially important in a console ecosystem. Pick up a Seagate FireCuda 530 now, near the beginning of this console generation, and it’ll easily last the rest of it and even further beyond – especially if you enjoy revisiting older titles. Enjoy the transformative benefits a super-fast solid-state drive brings now, for the maximum amount of time, without worrying about it burning out prematurely.

We’ve predominantly focused on the latest generation consoles like the PlayStation 5, as they feature hardware-accelerated decompressions algorithms, to push the performance of the Seagate FireCuda 530 solid-state drive to its absolute limits. Exclusives like Ratchet & Clank: Rift Apart are meticulously engineered around a solid-state drive and can’t be replicated on conventional storage.

The current console generation has only begun and as developers gradually adapt to the hardware’s intricacies, expect even better games further into the console’s life cycle. Solid-state drives are uncharted territories for console developers – once they’ve got a few years’ worth of experience under their belt, games will become more demanding with larger, open-world landscapes. The FireCuda 530 is future-proofed, more than capable of handling future titles. Versus the existing architecture of PlayStation 5, nothing’s truly comparable on PC… yet.

For those understandably weary about transitioning to a brand-new operating system on day one, don’t worry. DirectStorage is also being back-ported to everyone’s favourite Windows 10, albeit in a lesser capacity, relying on legacy features. Windows 11 was built from the beginning with DirectStorage as a core implementation and features fully upgraded storage stack optimisations.

To ensure you’re future proofed and prepared well ahead for Windows 11 and the inevitable onslaught of DirectStorage-powered games, the Seagate FireCuda 530 is a worthy companion.

From compulsive data hoarders to space-limited console gamers, everyone’s got their own specific requirements for storage. Check out the Seagate FireCuda 530 line-up, offered in a broad range of capacities to suit any system.

From a quick-and-easy 500GB injection to bolster your system’s storage, up to a staggering 4TB drive adopting the role of primary storage, with 1TB and 2TB options in-between. Check them out, over at Ebuyer!