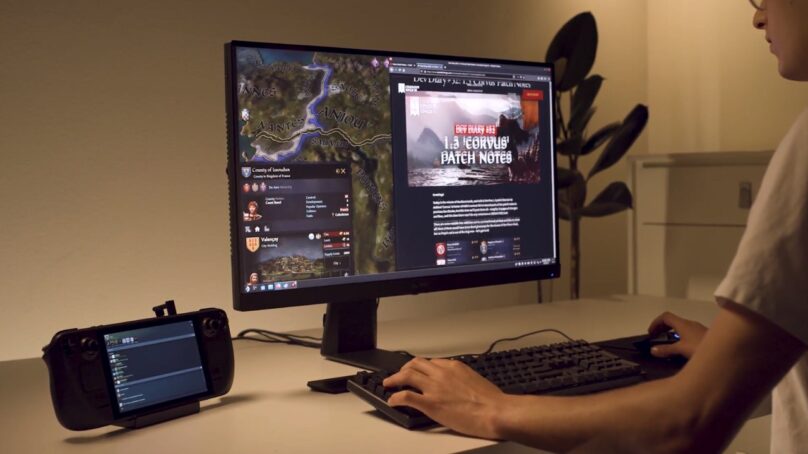 Images in the article provided by: Steam, Valve (https://www.steamdeck.com/en/hardware)

Did you manage to snag a Steam Deck over the weekend? Reservations went live and availability for the highly sought-after portable gaming PC dwindled rapidly.

Originally intended to begin shipping later this year, if you try to place an order now, you’ll be waiting a while. Availability is not expected until quarter two of 2022 – or beyond! Your only option may be the lower-end model with a 64GB eMMC drive.

But what is eMMC, and is 64GB enough? We’ll cover what these mean for your Steam Deck and how you could potentially upgrade the system’s storage capacity.

Embedded MultiMediaCard (eMMC) is essentially a souped-up SD card, the ‘embedded’ referring to it being soldered directly to the circuit board. eMMC’s paired-back specifications and compact package make it ideal for the low-cost devices.

For day-to-day tasks and gaming, we’d categorise it as ‘fast enough’. Don’t expect near-instant loading times or compatibility with DirectStorage later down the line.

The storage size is the more pressing concern. Other handheld devices like the Nintendo Switch have even less on-board memory, but playing directly from a physical cartridge is always an option.

Just 64GB for an all-digital device like the Steam Desk raises concerns. Unlike the Nintendo Switch, games are not specifically engineered and compressed around the device’s limitations. As per Valve’s marketing, the Steam Deck is treated like an ordinary PC.

Additionally, the advertised 64GB fails to mention how much space the pre-installed software like the operating system and Steam itself take up.

Fortunately, the system’s default operating system SteamOS is based on Linux, which should have substantially less overhead and unnecessary bloat than modern Windows iterations.

One of the Steam Deck’s biggest features is being a fully-fledged PC, however. What about other must-have programs and files, like your extensive collection of high-quality memes? Will they invasively intrude on the limited capacity?

Even if you run a bare-minimum installation, the sheer size of a single modern AAA game may not fit on the drive.

Technically, the Steam Deck comes with two storage upgrade solutions. One of them was revealed post-announcement by the co-founder and president of Valve, Gabe Newell, in an e-mail reply.

If you’ve read our article on upgrading the PlayStation 5’s internal storage via the expansion bay, you’ll remember SSD comes in all sorts of shapes and sizes – elongated, stubby and everything in-between.

This is what the ‘2230’ refers to. 22mm wide, 30mm long. It’s the smallest available M.2-interface drive, perfect for space-constraint systems.

Valve understandably opted for the 2230 form factor, though it also thwarts people purchasing the lowest-end model and updating the internal drive themselves.

The same tech-specs page includes the disclaimer: “All models use socketed 2230 M.2 modules (not intended for end-user replacement)”.

A high-powered, densely packed machine like the Steam Deck is going to favour space efficiency over ease of upgradability. Even the most seasoned system builders are likely to encounter hurdles.

Valve is clearly adverse to encouraging a user ripping open their units and tearing delicate ribbon cables in the process. So, while upgrading the internal drive is technically possible, it isn’t recommended.

This leaves the high-speed microSD card slot. It’s not as fast as an integrated drive, but provides an easily upgradable solution at an ideal price-to-storage ratio.

Simply slot in the base of the device and forget about it. No teeny-tiny screws or guitar pick shimming to pry open the device’s brittle plastic clips.

Don’t think of the microSD slot as a sure-fire way to circumvent the internal drive’s capacity limitations. Running games directly from an SD card isn’t ideal. It’s technically feasible, but potentially slow. An uncomfortable throw-back to the days of slowly spinning 5400RPM platters.

If you intend to play games directly from the SD card, make sure you select an SD card which can saturate the slot’s UHS-I speed rating. Foreseeing the popularity SD cards for the Steam Deck, Valve may potentially engineer system-level tweaks to make loading from SD cards more performant.

For older or less demanding games an SD card should be fast enough, but we recommend treating the SD card as an archival back-up. Swap your favourite games in-and-out from your external SD card to the internal drive for faster speeds.

The sweet-spot sounds like securing any model of the Steam Deck and pairing it together with a high capacity microSD card – of course, available from Ebuyer:

What internal SSDs should work with PlayStation 5