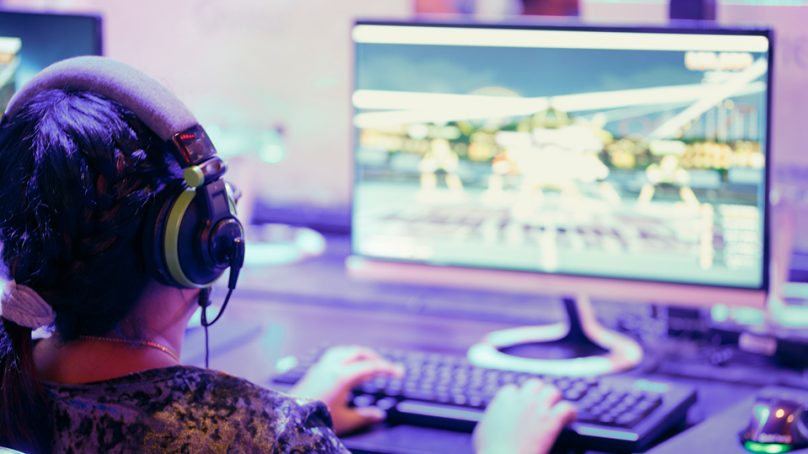 We mean – obviously. And we’re not alone. With over two billion gamers worldwide, the industry’s audience is bigger than ever – and PC games (in our humble opinion) only get better and better. Here are just a few of our faves.

Even though it launched in 2017, Fortnite still hasn’t gotten old. Maybe it’s because you get to defeat your enemies while wearing anything from the coolest armour to a banana suit (dubbed “Peely”). Maybe it’s because new content gets added every second (at least, that’s what it feels like). Or maybe it’s because no battle feels the same. Not only do you have to defeat 99 other players to win, you also have to get pretty creative in order to survive, building shelters and shaping your landscape to outsmart your enemies. A timeless future classic.

The Total War series excels at recreating all-out conflict, no matter the source material. Whether it’s the fictional Warhammer universe or the Roman era, developer Creative Assembly has mastered the art of producing gripping turn-based strategy games, and Total War: Three Kingdoms is no exception. Set in the age of heroes and legends, Three Kingdoms brings conflicts from ancient China to life as you fight to forge a new dynasty that will last through the ages. Glorious conquest awaits.

Scared your socks off yet with Resi Evil 2? If not, what are you doing? Capcom’s unbelievable release is everything that a remake should be, adapted for modern tech with incredible 4K graphics and crammed with great features, all while retaining the spirit of the 1998 release. Solve puzzles, battle grisly zombies and traverse the gothic streets of Raccoon City as both Leon and Claire, where you’ll find plenty of areas that hark back to locations in the original game. Memory lane has never been more macabre. (Plus, now you can download a mod that makes a terrifying Thomas the Tank Engine one of your enemies. So, there’s that.)

Put your feet up, pop on your PC and plunge into the post-apocalyptic Russian wilderness with Metro Exodus: the third instalment in the Metro series and frankly, nothing short of epic. Whether you’re running away from giant rodent mutant thingies (honestly, that’s the best way to describe them), adapting to the extremities of each bitter season or engaging in battle with one of your many, many foes, the thrills come fast in this freakishly good first-person shooter. Give it a go.

Satisfy your primal instincts by slaying the aggressive beasts that roam the lands of Monster Hunter World. Team up with up to three friends, chow down on a stat-boosting meal, and prepare your inventory accordingly for the challenges that await you in the wild. There’s something weirdly satisfying about crafting weapons and armour out of the monsters you’ve mauled, not only because they tend to look great, but they act as a constant reminder of your success. With countless weapons to try out, each with their own perks, style and abilities, don’t be surprised if you get hooked by the hunt. Time to ready up.

You’ve never seen good ol’ Blighty like this before. The latest game in the Forza franchise truly shows off the best of Britain, allowing you to zip through gorgeous landscapes – including landmarks like Edinburgh Castle and the Lake District – in conditions ranging from sunshine and snow to rain (if you’re going for the classic British experience). Although you can, of course, enjoy the open world game online, racing opponents and achieving objectives, there are plenty of things to do solo, such as skating on frozen lakes and destroying buildings in a drool-worthy yellow McLaren. Fun.

Apex Legends came as quite the surprise when it dropped, unannounced, into the world on February 4th – though we think it’s safe to say that it wasn’t an unwelcome one. Though it’s yet another battle royale game, it’s replete with genre-defying twists that’ll keep you on your toes – the main one being that each character (or “Legend”) that you can fight with has unique abilities of their own, which you can use to your advantage in battle. Also, success relies heavily on your capacity to work as a team, as the game dictates that you work in a squad of three. Daring, different, and with a darn cool soundtrack: what’s not to love?