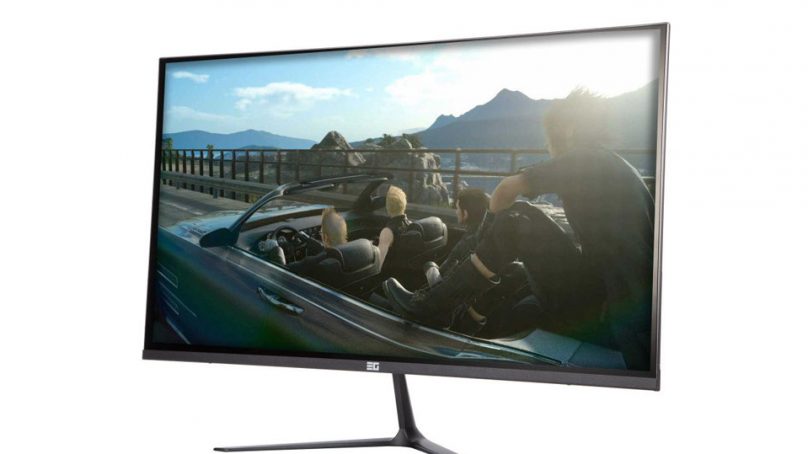 When it comes to buying shiny new tech, we tend to lean towards reputable brands. Logically, it’s a safer choice, and one that has likely been strengthened by a previous purchase or a recommendation from a friend. We know these companies, therefore we trust them. It’s a risk-free scenario.

We’ve also come to expect that the price of a product is usually a fair reflection of its quality. The higher the cost, the better the product. But if it’s unbelievably cheap? Well, don’t be surprised you’re left feeling shortchanged (despite the savings).

You’d be forgiven, then, for taking a long, hard, sceptical stare at the EG 27” 144hz Gaming Monitor. For less than £270.00, we have a stylish-looking monitor that supports 2560 x 1440 QHD resolution (1440p), a 144hz refresh rate, and offers 1ms response time. It’s also VESA mountable, and includes AMD FreeSync to eliminate screen tearing and stuttering.

So what’s the catch? Honestly, after putting EG’s monitor through its paces, I’m surprised to say there isn’t one. This is a fundamentally brilliant monitor at an outrageously low price, however, there are a few compromises to build quality and odd design choices that you should be aware of.

First impressions of the EG 27” 144hz Gaming Monitor were rather muted to say the least. It arrived in a plain, almost colourless cardboard box that reinforced the notion of a budget buy. Thankfully, two thick pieces of polystyrene housed the monitor and its components safely and snugly, dispelling any fears that anything could be damaged during transit. Assembly was simple, with only three screws required to attach the stand to the monitor. You also get a HDMI and DisplayPort cable included, which was very handy.

Off to a good start, then. But once we’d placed the monitor down in its new home an obstacle quickly presented itself. The monitor was slumped forward ever so slightly, and despite a few tentative attempts, we were unable to tilt it. Luckily, it turned out that the hinge was just worryingly stiff at first, and with a little bravery and a bit more force than we’d like, we were able to tilt the monitor back and forth with ease. Unfortunately there isn’t any height adjustment or screen rotation available, so bear that in mind depending on your setup. Oh, and there’s a bit of wobble to the screen depending on how vigorous you are at your desk, but it wasn’t severe enough to cause any issues during normal usage.

Strangely, the monitor is operated by using a flimsy, plastic joystick at the back of the unit. It feels robust and responsive enough, but the way it works can be a bit of a head scratcher. We frequently found ourselves turning the monitor off when attempting to select values, as our natural instinct was to push the joystick in to confirm a selection, instead of flicking it to the side. Once our muscle memory had adapted, though, it proved to be more than efficient for the task at hand.

So what’s the picture quality like? Well, we’re pleased to report that this where the EG 27” 144Hz Gaming Monitor really starts to shine. Even from the outset, the default picture settings were fairly decent out the box, with punchy colours and impressive brightness levels. You get a number of preset picture options to choose from: Standard, Eyeshield, Movie, FPS and RTS – however, we stuck with Standard as it provided the most natural picture and allowed us to tweak the image quality further to our liking.

Due to being a TN panel, viewing angles are fairly limited – hardly a concern if you’re sat directly in front of the monitor (which we assume you will be) – but the upshot is fantastic grey-to-grey response times and extremely low input lag. Overall screen uniformity was solid, too, with minimal clouding present and no distracting light bleed, a serious pet peeve of ours. The panel does suffer from a somewhat aggressive matte finish, though, which can make static solid colours seem as though they’re hidden behind a thin layer of vaseline. Truthfully told, though, it wasn’t a concern while we were playing, and you’re unlikely to notice it unless you specifically look out for it.

With our Xbox One hooked up to the single HDMI slot, we put the monitor’s input lag to the test with some competitive games on Halo 5: Guardians. Every input felt suitably snappy and responsive, and despite Halo 5 being only 1080p, the EG 27” Gaming Monitor did a fine job at upscaling without showing any visible artefacts or blurriness. Perhaps it was the monitor, or just the way we were playing, but we managed to win eight games of Slayer on the bounce – not an easy feat on Halo, we can assure you.

So input lag cuts the mustard, but what about ghosting, trailing or smearing? We’ve always found that FIFA is the perfect game to expose any ghosting due to the bold colours, fast camera pans and dark and light areas on the pitch. With the Response Time set to High and Medium, we noticed that the red icon above a player’s head was leaving an ethereal-like trail behind it – a sure sign of ghosting. Changing the Response Time to Low thankfully solved this problem, eliminating any ghosting or smearing that was present.

Of course, the Xbox One isn’t the best test candidate to showcase this monitors true capabilities, so it was time to boot up the PC and see the 144hz panel in action. The difference in refresh rate was immediately apparent when compared to our 60hz panel, with the mouse cursor gliding across the screen with a new degree of smoothness that was instantly gratifying. Text looked sharp and crisp at 1440p, too, making browsing and writing a pleasing experience. But this is a monitor designed for gaming first and foremost, so let’s get back to that, shall we?

One of the most colourful games in recent memory, Sea of Thieves’ art style was perfectly at home on the EG 27” Gaming Monitor. The crisp blue skies, searingly bright sun and lush, isolated islands looked simply gorgeous as we sailed around the wide-open seas. Screen tear – an issue that had plagued us like so many plundering pirates in the past – was completely eradicated, too, thanks to FreeSync.

The same can be said for PUBG, a game which demands a steady and high level of performance. We found gameplay to be smooth, responsive and free of any distracting issues that lesser displays can often produce. In fact, the EG 27” Gaming Monitor soon became our display of choice when it came to play, despite being up against our LG 27” 4K IPS monitor, which is quite the compliment.

After some tinkering, testing and playing in various lighting conditions, we stuck with these settings:

Despite some compromises to build quality, and a few odd design decisions, it’s hard to pick fault at the overall quality of the EG 27” Gaming Monitor. The performance and features are here, backed by incredible value for money. Yes, there’s room for improvement, and some of the issues may be too much for some to deal with, but it’s hard not to respect what EG has achieved. If you’re looking for a gaming monitor that ticks all the right boxes of any discerning gamer, look no further than the EG 27” Gaming Monitor.

The ultimate guide to VR games