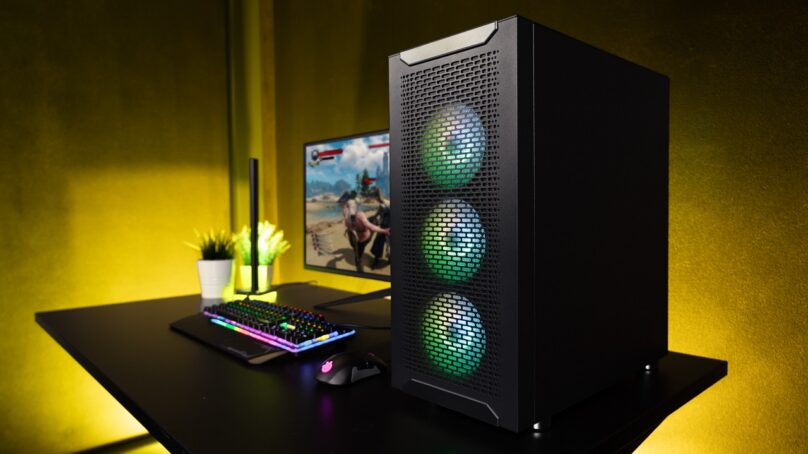 For the hardware that’s on offer, a game console is an unbeatable value, mostly towards the beginning of a generation. In terms of performance, the PlayStation 5 and Xbox Series X have what very roughly equates to an AMD Ryzen 7 3700X and a NVIDIA GeForce RTX 2070 Super. That’s an 8-core/16-thread, Zen 2-powered CPU and a powerful, raytracing-capable GPU – as well as a super-fast SSD and more.

Right now, there’s no way you can build or buy an equivalent-spec gaming PC for anywhere near the price of a current-gen console. That’s because a mass-produced console has economies of scale on its side and as detailed in our blog Games you can play on any device… they’re often sold at a loss.

We wouldn’t argue that console hardware is cheaper than gaming PC hardware. However, while the hardware itself may be a good value, it suckers you into a closed ecosystem of paid online and more expensive games.

Which, in the long run, might work out more costly than a gaming PC. There’s a higher outlay for a satisfactory PC gaming experience, but everything else is cheaper or free, with loads more quality-of-life features to boot. Here’s why you should buy a gaming PC.

On current-gen consoles, you’ll have to pay for PlayStation Plus, Xbox Live Gold (which is included in Xbox Game Pass Ultimate) and/or Nintendo Switch Online to play paid games online. That’s an extra monthly fee just to queue up with you mates in multi-player games, a fee which doesn’t exist on PC.

A modern console generation lasts at least five years – the PlayStation 5 released seven years after the PlayStation 4. If you keep an active subscription through the whole generation, this fee adds up. The money you could’ve saved with the free online multi-player on a gaming PC helps take the sting out of its beefier price tag.

Games themselves are also cheaper on a gaming PC versus a console. As an example, let’s look at the recent release Ghostwire: Tokyo. On Steam, a PC gamer’s storefront of choice, it was up at £49.99 for pre-order. Whereas over on PlayStation Store, they’re were asking for £59.99, yet it’s the exact same game.

Notably, Ghostwire: Tokyo is a third-party published game. PlayStation’s own first-party games, like the recent Gran Turismo 7, fetch an eye-watering £69.99. And that’s for a standard, no-DLC version. If you’re a die-hard gamer that’s got to play new games as they are released, you’ll save a decent amount of money buying games for a gaming PC.

What’s more, game sales with deeper discounts are frequently seen for a gaming PC. Steam holds sales all year round. This year, we’ve already seen Steam’s Winter, Lunar New Year, Next Fest, Remote Play Together and JRPG sales. And when there’s no sale on, there’s always mid-week and weekend special offers too.

On a gaming PC, you’re never too far away from a sale. So far, we’ve mentioned Steam a lot, but a gaming PC is an open ecosystem. Unlike a locked-down console, you’re not forced to go through the platform holder’s store. Steam is only one option – there’s also Xbox Game Pass, GOG, Humble Bundle and more. Each vying for your patronage with deep discounts and even free games.

Games are often given away for free too, no strings attached. Since mid-2019, Epic Games Store has given away a free game every week that’s permanently added to your account – no limited-time trial or free weekend. We’re not talking about bottom of the bargain bin games, either. Epic Games Store have given away huge hits like Grand Theft Auto 5, Star Wars Battlefront II and NBA 2K21.

And again, that’s only one storefront. Grab a HumbleBundle to get hundreds of pounds’ worth of games for cheap while also supporting charity. Claim Epic Games Store’s free game each week and try out Steam’s free weekend game. A gaming PC has an unfair reputation for being expensive, but it can be cheaper in many ways.

Even ignoring the discounts and deals, there’s a larger, more popular free-to-play market on a gaming PC. You don’t have to spend a penny on games for a great gaming experience. There are first-person multi-player shooters like Valorant and Counter Strike: Global Offensive, MOBAs like League of Legends and Dota 2, and many more – all free-to-play and exclusive to PC.

As they’re designed to reach as wide an audience as possible, a top-spec gaming PC isn’t needed to play these free-to-play games. They’ll run on pretty much anything, so don’t be put off by the idea you need a flashy, RGB-drenched gaming PC to be a PC gamer. For more info, check out our blog Can you game on integrated graphics…

Game consoles are well known for their system-seller exclusive games – Bloodborne, Halo, Mario – but that’s not to say gaming PCs don’t have their own exclusives. There are entire genres’ worth of games you can only play on a gaming PC, as they’d cease to function with a console’s simple control scheme.

They thrive on gaming PCs thanks to a keyboard and mouse set-up. You won’t find StarCraft or World of Warcraft on a game console.  Some genres play leagues better on a gaming PC with faster frame rates and more precise controls, like first-person shooters. It’s why a gaming PC is the premiere platform for esports and livestreaming.

If you want to play the hottest up-and-coming games, a gaming PC is where you’ll find them first. Games on consoles must pass strict compliance checks to ensure they don’t crack open a console’s closed ecosystem. This means it’s highly unlikely a rogue update will brick a console, but consequently, it makes it harder to publish for a console.

Whereas on PC, you might have an Intel CPU and a NVIDIA GPU in an AlphaSync pre-built gaming PC that’s running a Windows operating system and Steam. No one ‘owns’ PC as a platform and as such, PC games don’t have to go through such harsh checks.

It’s considerably easier for indie developers to self-publish their games on PC, which has also lead to the rise of the ‘early access’ release model. There are thousands of experimental, quirky, in-development games on a gaming PC that wouldn’t fly on a console, games which might become the next big thing. Minecraft is a landmark example, spending years in alpha and beta-test forms on PC long before it came to console. Survival games, battle-royale games and more – gaming’s biggest genres all found their footing on a gaming PC first.

Gaming PCs get lots of attention for running the latest AAA games at maxed-out graphics and ludicrous frame rates, but they’re just as good for replaying classic games or to experience them for the very first time.

A console tends to offer at least one generation of backwards compatible games. For instance, a PlayStation 5 console runs PlayStation 4 games, but that’s it. If you want to play your library of PS1, PS2 and PS3 games, you’ll have to keep your old consoles around, or buy them again as re-releases or remasters.

The concept of a clean-cut generation doesn’t really apply to a gaming PC. There’s no ‘PC 2’, they’re constantly evolving over time with new hardware, software, and technologies.

This means a big-box copy of a game you bought back in the early ‘00s should work on your brand-new gaming PC – at a higher resolution and refresh rate too.

It may require a bit of tinkering to get up-and-running on a modern operating system, but there are fantastic community-run resources like PC Gaming Wiki to help guide you through the process.

Out of any gaming device, a gaming PC easily has the most diverse and expansive catalogue of games. One moment you can be queueing up with your mates in Call of Duty Warzone, then organising a nostalgia-fuelled Age of Empires 2 LAN party.

It’s a PC game’s rite of passage to have Thomas the Tank Engine modded into it – Elden Ring has received this treatment already. But mods aren’t contained to funny gags for viral videos.

There are community-made patches that address bugs more than a game’s developer ever could – the VTMB Unofficial Patch continues to be updated to this day, adding various tweaks and restoring unused content to an 18 year old game! Mods can add brand-new mechanics and scenarios to a game too, enhancing their replayability. Want a Game of Thrones-themed grand strategy game? There’s a mod for that.

Visual enhancement mods are also extremely popular, effectively letting you create your own remastered version of a game. Browse YouTube for ‘Minecraft shaders’, and you’ll soon see how transformative mods can be to even a blocky, pixelated game like Minecraft, injecting realistic lighting and water shaders. With the power of a gaming PC on tap, use PC mods to breathe new life into games and make them even better.

You’re in complete control over your experience on a gaming PC. Consoles are great plug-and-play devices, but their features and functions can often feel restrictive. Whereas a gaming PC lets you tinker and tweak with it to your exact preference.

A keyboard and mouse set-up is strongly associated with a gaming PC, but nothing’s stopping you from hooking a gaming PC up to a 4K TV in your living room, kicking back on your sofa and playing with a controller. It’s a completely viable option, as a gaming PC accepts a wide range of input methods. Whether that’s a console’s controller, racing wheel, flight stick or more.

This freedom extends to your choice of display as well, you’re not confined to a standard 16:9 aspect ratio. A multi-monitor set-up is quite popular on a gaming PC for heightened multi-tasking and ultrawide monitors make for extremely immersive gaming.

You don’t even have to use a gaming PC strictly for games, as it’s a super-fast PC in its own right. Leverage a gaming PC’s power to speed up hardware-accelerate applications for university course work, livestreaming and video editing.

Looking to build your own gaming PC? Check out our Top 10 Tips on Building a PC… and buy all the PC components you’ll need over at Ebuyer – CPUs, GPUs and more. If you’re not up for doing it yourself, Ebuyer stocks a range of pre-built gaming PCs, shipped right to your door.