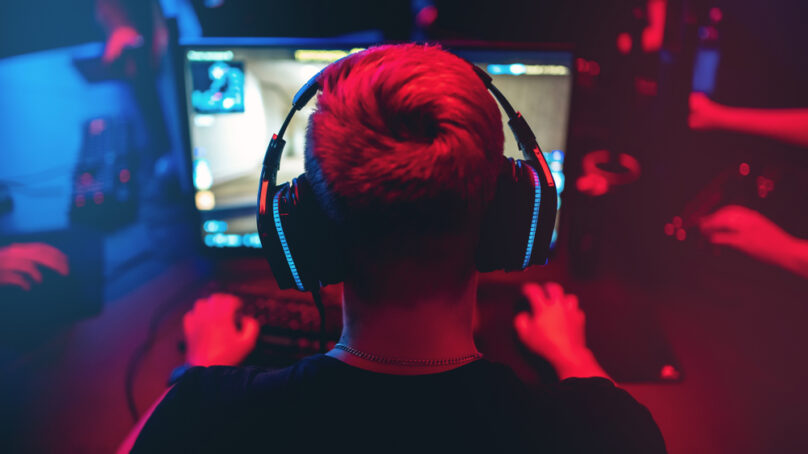 Have you got what it takes to game like a pro? Here’s our top 10 tips, including managing your gaming set-up, making sure you’ve got the right specs and how to improve your gameplay.

1. Find your own settings

There are websites which compile exhaustive lists of a pro’s set-up, including their gaming mouse DPI and sensitivity. Having access to settings the world’s best players use is insightful, but you shouldn’t blindly copy them, as if it’s a cheat-sheet to game like a pro.

Rather, we recommended using them as a starting guide of sorts, and fine-tuning your own preferred DPI from there. A pro who plays a first-person shooter may use a DPI that’s perfect for them, but feels horribly slow and sluggish to you. Don’t preserve with an uncomfortable DPI only because it’s what the pros use, you may aim better with one that’s higher. Delve into your gaming mouse’s software and freely experiment with DPI.

Conversely, don’t write off a DPI because it doesn’t instantaneously make you a headshot-blasting pro. It takes hours’ worth of practice to become accustomed to a DPI. Stick with a DPI and soon you’ll instinctively know just how far you’ve got to flick a cursor to land on an opponent’s head.

2. Make sure your monitor is set up properly

It may say it’s ‘144Hz’ on the box, but you must enable this refresh rate to see the benefits. A lot of monitors run at 60Hz out of the box, or your operating system sets it to this for compatibility reasons. Make sure to check out our blog Making the most of your gaming monitor… for a walkthrough of how to enable your monitor’s maximum refresh rate, as well as other do’s and don’ts.

Wi-Fi can be disastrous for pro-level gaming. A wire-free connection may be convenient, but it’s much more susceptible to ping spikes, packet loss and random disconnects than a hard-wired ethernet connection. It’s partly why esports tournaments take place in-person and over a local area network, as pros demand the lowest end-to-end lag. Anything that’s in the way of an input being registered as fast as possible – such as a Wi-Fi connection – needs to go.

Fortunately, most gaming PCs, gaming laptops and game consoles are equipped with an ethernet port for a rock-solid, unwavering internet connection. Ethernet’s great if you’ve got a router or outlet near you gaming set-up to hook up to. Not everyone does, however, or there’s not enough ethernet to go around. That’s where powerline adapters and networking switches come in.

Plug into a switch from your router or outlet, and it’ll give you many more output ports to work with. You may only have one outlet in your set-up, so a switch gets your ethernet speeds for all your devices – gaming PC, consoles and more. A powerline adapter converts your property’s electrical cabling into super-fast routes for your networking. It may not be as fast as ethernet, but it’s a better alternative to gaming on Wi-Fi.

For esports, it’s highly advised to turn off vertical sync – which synchronises a game’s frame rate to the refresh rate of your gaming monitor – for the highest frames-per-second and lowest input lag possible.

While esports games don’t have breath-taking graphics – most pros outright disable effects for fast performance and a less distracting image – disabling V-Sync means your PC’s running unrestrained, which will pin your GPU usage to 100% at all times.

As you can imagine, this puts your GPU under intense strain, especially when you’re playing marathon gaming sessions. Which, if you’re not careful, can lead to overheating.

When a GPU overheats, it will throttle performance until it reaches a safe and manageable temperature – check out our blog PC cooling – what you need to know… In-game, thermal throttling manifests itself as huge, lurching drops in frame rates. When you’re in the middle of a match, it’s the last thing you want. You could be running at 300 frames-per-second, but throttling kicks in and tanks your frames, impacting the input latency and fluidity of a game.

Consistency is key, so you can’t have wildly fluctuating frames. To avoid thermal throttling, you need adequate PC cooling – an aftermarket air or all-in-one water cooler, a computer case designed for high airflow and case fans to push-and-pull air through your PC.

To game like a pro, consistency is key. Pros may practice for an ungodly length of time, but throughout it all, their set-up stays consistent. Despite newer and faster technologies, many pros show a strong preference for their older gear, as they’ve built up untransferable muscle memory and familiarity with it. When you’re competing at the highest level, you want a set-up that’s comfortable and easy to enter the zone with. This extends to your gaming chair, too.

A high-quality gaming chairs not only ensures you’re comfortable to queue up for ranked again and again, but you’re maintaining a healthier posture while doing so. Adjust your gaming chair to your exact liking, with 4-D arm rests and adjustable lumbar, and you’ll be able to get straight into and focus on the game, without fidgeting and distractions.

6. Learn from the pros, watch livestreams

No doubt you’ll improve at a game if you invest the hours. However, games are tremendously complex and ever-evolving through balance patches and content updates. Given enough time, you may think you’ve wringed out all there is to a game mechanic, but you might’ve barely scratched the surface.

For instance, the ridiculously popular MOBA League of Legends once started out with 40 playable characters – now it has 159. It’s impossible to believe you’ve discovered – let alone mastered – every mechanical quirk and intricacy of every character. Particular with live-service games, where all it takes is some behind-the-scenes tweaks from the dev’s end to change how a character plays.

With hundreds of characters, team comps, builds and more, games can have a daunting amount of depth. You don’t have to figure it out alone, though. Tune into livestreams of the pros and learn high-level plays directly from them. Watching livestreams can fast-track your knowledge of a game in mere minutes, picking up on trick you would’ve never thought of otherwise.

7. Game on PC for the largest esports scene

From livestreams to tournaments, look around and you’ll see PCs dominate over consoles in the esports scene. That’s not to say you can’t compete on a console, or it doesn’t have its own scene. However, all the high-profile esports that attract millions of followers – Counter Strike, League of Legends, Starcraft and more – are either on or exclusive to PCs. If you want to game like a pro, you should get on PC – but why’s the platform so favoured?

A gaming PC raises the ceiling of gameplay that’s possible with faster performance. As detailed in our blog Best Gaming Monitors of 2022…, a higher frame rate on a high refresh gaming monitor means you’ll see many more images a second and a decrease in render-to-display latency for more faster twitch reflex.

Going from a 60Hz refresh common on consoles (16.6ms between frames) to a 144Hz (6.9ms between frames) is a game-changing leap in motion smoothness, clarity and latency – a 9.7ms difference. And nowadays, 144Hz is considered the bare-minimum for esports, as there are gaming monitors that’ll go up to an eye-wateringly fast 360Hz.

8. You don’t need a top-spec gaming PC to compete

What’s more, a top-of-the-range gaming PC isn’t required for esports games. As games like League of Legends and Valorant are designed to hit hundreds of frames-per-second for saturating a high refresh rate gaming monitors, esports games will run on pretty much anything. From the internet café PCs all over South Korea, to your university laptop’s integrated graphics.

A high-specced gaming PC nets you even faster frame rates, but even a non-gaming laptop makes for a surprisingly decent esports experience too.

Even if you’ve bought all the right gear, you won’t simply transform into a pro overnight. To game like a pro, you must put in the hours to grasp and master what are, effectively, tools. Practicing day-in and day-out is a pro’s full-time commitment to stay at the height of their game. When you’re not watching livestreams of high-stakes tournaments, the esports pros are knuckled down and training – 16 hours a day isn’t unheard of.

To practice their mechanical ability (aim, movement, actions-per-minute, reaction speed), a pro’s day consists of: solo-queueing, scrims against other esports teams, analysing post-match replays, perfecting strategies and formulating new ones. It’s a lot, but don’t be disheartened if you’re trying to improve in your free time.

Remember, these pros are the top one-percent of the top one-percent, in games with millions of monthly active players. If you practice for even a fraction of time and are aware of the mistakes you’re making and consciously trying to improve, you’ll put yourself far ahead of most of the player base.

10. Don’t get frustrated by losses

To queue up for ranked, even after a long stretch of losses, means you must be strong-willed with a determination to win – no matter what a game throws at you. Winning a match decidedly – outplaying your foes through smart tactics and teamwork – feels ecstatic.

However, the winner’s high may not last for long, as a game can send you down a losing streak through no obvious fault of your own. When you’re at the cusp of climbing a rank, it can be soul-crushing to be matched with rookies, griefers and intentional feeding who’ll tank your ELO and wipe off all the progress you’ve made. It’s as if the game is conspiring against you to keep your rank down.

At this point, it’s easy to go on tirades on forums about how you’re ‘in the wrong rank’. Even if it’s frustrating, you can’t let losses get the better of you. You’ve got to knuckle down and grind away the ranks if you want to game like a pro. To reach the point where they are now, no doubt the pros faced their fair share of unsportsmanlike players, but they persevered.

Gaming keyboards, mice, monitors and more – get all your gaming gear at Ebuyer. Check out our blog The gear you need for esports… for the components, peripherals and accessories you’ll need to stay at the top of your game.

Corsair iCUE – What you need to know