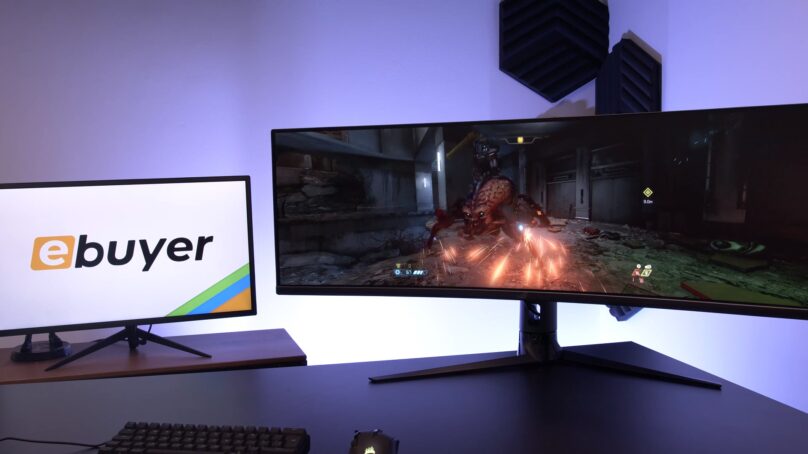 In our recent Best Gaming Monitors of 2022 blog, we went over the tech-specs you should be looking for in a gaming monitor, including resolution, refresh rate and more.

One of the main topics we expanded on was that an ultra-high resolution like 4K perhaps isn’t the optimal choice, at least not for a gaming monitor’s form-factor.

Rather than cramming in more and more pixels into a tighter space, and suffering the law of diminishing returns, what if we used them to expand outwards for wider field-of-view? That’s where ultrawide gaming monitors enter the picture.

Gaming on an Ultrawide Monitor – What’s the support like?

When considering an ultrawide gaming monitor, the question on everyone’s mind is game support. Monitors, laptops and TVs – the overwhelming majority of displays out there employ a standard widescreen format.

As games are designed with them in mind first and foremost, will games also support wider aspect ratios? Support is one thing, but whether games actually take advantage of an ultrawide gaming monitor’s broader field-of-view and heightened immersion is another.

At the very least, you should expect three tiers of support for ultrawide gaming monitors – no support, partial support and full support.

No Support – There are workarounds

This mainly applies to older games, ones which were released before the introduction of ultrawide gaming monitors. While some older games had the foresight to support arbitrary resolutions, many are hard-coded to only support contemporary resolutions.

Unfortunately, this somehow continues to be an unresolved issue for some modern games too. Elden Ring is one of 2022’s biggest releases, yet it doesn’t support ultrawide resolutions.

That is, at least not natively. Taking it upon themselves, PC gamers have created and shared mods and config tweaks to enable support for ultrawide gaming monitors in many previously unsupported games. As mentioned in our Must-haves for PC gaming: DXVK and Can you game on integrated graphics blogs, PC Gaming Wiki (abbreviated to PCGW) is a fantastic resource for sourcing these fixes.

That being said, it’s not as if some games simply won’t boot on an ultrawide gaming monitor. When there’s no support, you can still play the game, albeit in non-ultrawide resolution with black pillars flanking either side of the image.

Most games, however, have some support for ultrawide gaming monitors. Partial supports refers to games which will accept and display at a proper ultrawide resolution, but you can quickly tell they weren’t designed with it in mind.

The first tell-tale sign is stretched or misplaced UI elements, as if they’re remaining in the same position as they would be in on a standard widescreen format. Preferably, games would take advantage of an ultrawide resolution and place the UI in the display’s expanded regions. It’s not too much of a nuisance – most gamers subconsciously learn to turn out a game’s UI, anyway.

What’s more intrusive is when story sequences are pillar-boxed. Like movies, in-game cut-scenes are framed and shot in a particular aspect ratio. It’s not so easy to adapt these for an ultrawide resolution, whether for a technical or artistic reason.

In games, a lot of cut-scenes are pre-rendered, stored as video files and simply played back. It’s not feasible to re-render cut-scenes for each aspect ratio, otherwise a game’s file size would bloat to something enormous. Even for cut-scenes rendered at real-time, a shot’s framing is a deliberate choice. The black pillars tend to be used for a reason. Remove them, and you might not like what’s lurking behind – t-posing characters you weren’t supposed to see, unloaded assets and general bugginess.

At first glance, it appears some competitive multi-player games support an ultrawide gaming monitor, but you might feel something’s not quite right. Some e-sports-level games, mainly first-person shooters like Valorant and Overwatch, don’t support a ‘true’ ultrawide resolution. For competitive integrity and fairness, as it’s often framed by developers, they’ll crop an ultrawide gaming monitor’s extended field-of-view so it’s consistent across all aspect ratios.

When a game fully supports an ultrawide gaming monitor, it makes for an unbelievably good gaming experience. Fortunately, despite some notable outliers, more and more games are supporting an ultrawide resolution right out of the box.

The jump from partial support isn’t that big either, it’s mostly a few small but much-appreciated touches that go a long way in enhancing the user experience. Such as scaling menus to an appropriate size, rearranging UI elements so they’re not stuck in a standard widescreen format and removing black bars from story sequences, without breaking anything behind-the-scenes.

A recent high-profile example would be Kojima Productions’ PC port of Death Stranding. We were pleasantly surprised to see ultrawide support featured prominently in the port’s pre-launch marketing – a rare occurrence indeed. In the run-up to the port’s launch, Kojima Productions shared videos of their superb ultrawide support. These videos did an exemplary job of showcasing how transformative an ultrawide gaming monitor can be, changing the ways we view a game’s environments and landscapes.

A curve also enhances the viewing experience. Without a curve, the far-flung edges of an ultrawide gaming monitor might escape out of your peripheral vision. Even if we’re focused predominantly at the centre of a monitor, when gaming, you need to keep tabs on all that’s going on. You don’t want to miss an enemy that’s crawling in from off-screen. A curve on an ultrawide gaming monitor ensures you’ve got it entirely in your vision.

An ultrawide gaming monitor achieves the same results as a multi-monitor set-up, but with a key advantage – no bezels. You’ll have one continuous and unobstructed view on an ultrawide gaming monitor, without bezels ruining immersion. Even with the ‘bezel-less’ design of most modern monitors, on a multi-monitor set-up, thin strips of bezel separating each monitor is unavoidable.

Since an ultrawide gaming monitor uses only one panel, you don’t have to worry about calibration and uniformity between monitors. You could’ve picked out two identical models for a multi-monitor set-up, but due to slight tolerances in manufacturing, they’ll never look exactly like-for-like.

No matter how hard you try to dial in and match each monitor’s colour, it’s nigh-on impossible to overcome the variation at a panel-level. For instance, one monitor might’ve shipped with a slight warm colour temperature, while the other’s cooler. Tinkering with on-screen displays and colour profiles won’t change this.

An ultrawide gaming monitor enhances many aspects of a PC, not only the game themselves. On a gaming PC, you’re often multi-tasking; grinding levels away in an MMO-RPG, while listening to a podcast in the background and alt-tabbing to browse a game’s Wiki for farming routes.

Rather than playing in full-screen, you could play in a standard format and use an ultrawide gaming monitor’s extra real estate to bring up other windows. This is particularly advantageous for content creators and live-streamers. For instance, you could bring up your stream’s chat on one side of monitor and your broadcasting software on another, with a game in-between.

An average YouTube video or Twitch live-stream is going to be in a standard widescreen format. However, most films are shot in an ultrawide format. Free from distracting black pillars, this makes an ultrawide gaming monitor arguably the best at-home movie-viewing experience. Most streaming services, like Netflix, can detect and adjust to an ultrawide gaming monitor, without fuss. Though, you might need to use a supported browser, extension or app.

Ultrawide gaming monitors are also utterly fantastic for simulation and racing games. From having all of a plane’s complex controls laid out in front of you to side-view mirrors in your periphery, check out our review of the ASUS ROG STRIX XG43VQ, where we test Microsoft Flight Simulator, Forza Horizon and more! It’s the most ludicrous gaming monitor we’ve covered on the Ebuyer YouTube channel and Ebuyer Gaming Hub yet…