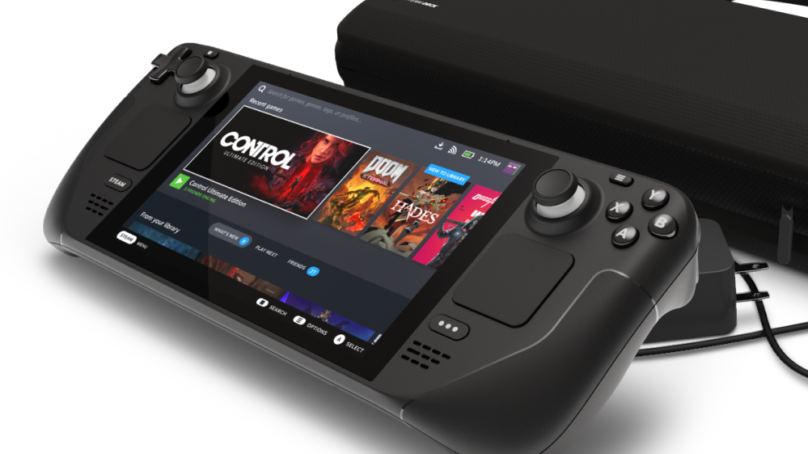 After abandoning their disappointing line-up of Steam Machines years back, Valve is back to take another shot at the concept – albeit in a portable form.

If you were left a bit underwhelmed by the reveal of the boringly named Nintendo Switch (OLED Model), the Steam Deck is surprisingly powerful.

Valve has partnered with AMD to co-develop a custom Zen 2 and RDNA 2-based APU – the same architecture found in the next-generation consoles.

The 7” touch screen runs at 1280×800, 60Hz. This initially sounds lacklustre, but for a low power-draw device focused on extending battery it makes perfect sense.

The on-board battery is rated for a maximum of 7-8 for lighter workloads like steaming or 2-D indies, but expect significantly less in demanding AAA games.

It’s obviously not as portable as a dedicated home console – but for a handheld it’s unmatched. This lower resolution is key in being able to drive even the biggest blockbuster releases.

Though cooling considerations, thermal constraints and power draw are likely to interfere.

The input options are densely packed. You’ve got enhanced controller staples like analogue triggers, capacitive-touch sticks and even four re-bindable buttons on the handheld’s grips.

But the PC-first approach is clearly apparent. Carrying over design considerations from their virtual reality controllers, Valve has included a pair of trackpads flanking either side of the screen. They allow you to enjoy games never intended for analog sicks.

The stand-out characteristic of the Steam Deck is simply being a PC. It comes pre-loaded with a revamped version of SteamOS, Valve’s custom-tailored version of Linux.

Valve is heavily invested in the promising future of Linux, and their ingenious compatibility layer Proton is the structural backbone of the out-of-the-box experience.

It translates non-native Linux games to run on the operating system, without any input from game developers.

Elusive, deeply-rooted anti-cheat systems have historically been troublesome for Proton, but Valve is promising a vastly improved game compatibility.

There’s even an official dock, sold separately, so you can hook it up to an external monitor or TV and use it as a fully-fledged PC.

Steam works just as you’d expect on the Steam Deck. In terms of cloud saves, remote play and community activity the Steam Deck version is feature-rich. Only the interface is slightly tweaked to accommodate button prompts and screen size.

If the idea of taking your entire Steam library on-the-go is even slightly intriguing you should act fast. The Steam Deck is already available to reserve now in select regions ahead of the December 2021 release date.

The Steam Deck comes in three variations: a 64GB eMMC model, 256GB NVMe SSD and 512GB NVMe SSD, all with a carrying case and a microSD card slot for storage expansion.

The NVMe-equipped models bring speedier loading times and some exclusive virtual goodies to show-off on your Steam profile.

Foreseeing the on-going scalper epidemic, Steam has smartly baked-in restrictions to their system to prevent a mass wave of bots.

On top of a small reservation free, your Steam account must have made a purchase before June 2021. This step should handily prevent scalpers mass-creating accounts.

We’re thoroughly anticipating trying out the Steam Deck for ourselves. It’s shaping up to be a surprisingly capable machine for no compromise portable gaming, emulation and general day-to-day PC tasks.