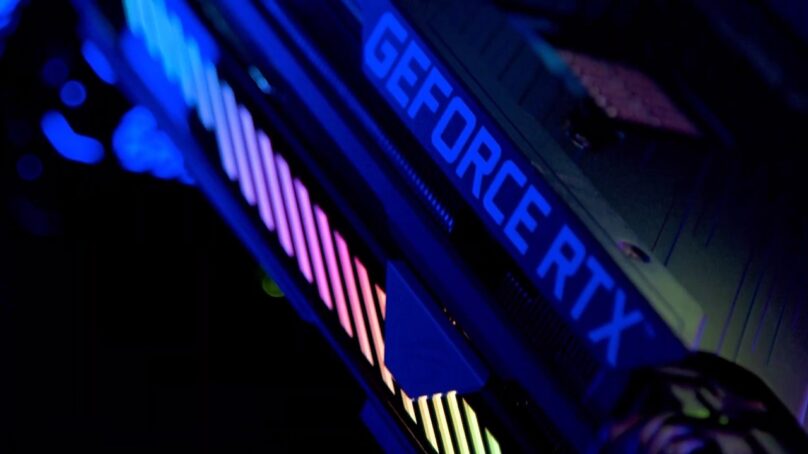 In terms of raw horsepower, NVIDIA GeForce RTX 30 Series graphics cards are blisteringly fast. However, with the advent of real-time raytracing and image reconstruction, it’s just as important to look at how a GPU supports these technologies. With DLSS and industry-leading raytracing performance, here’s why you should buy a RTX 30 Series GPU.

Reconstruction is essential to keep games performant while running maxed-out graphics and real-time raytracing, and DLSS is the best reconstruction technique we’ve seen.

Why we need image reconstruction

It started with 2016’s mid-generation console refresh cycle, introducing the ‘4K capable’ PlayStation 4 Pro and the Xbox One X further on. Targeting such an absurdly high resolution has forced game developers to change their approach to rendering. 2160p (or ‘4K’) is an enormous increase in resolution, four times as many pixels as 1080p.

This puts hardware under a heavy load to churn out over 8 million pixels every frame. When there are new graphics techniques and faster frame rates to consider as well, exhausting so much horsepower on a raw, native 4K for a crisper image alone isn’t worth it.

However, 4K TVs and gaming monitors are increasingly common. To make their games presentable on an ultra-high-res display, developers turned to image reconstruction and upscaling techniques – transforming a lower-res input into a higher-res output.

For instance, a game could produce a ‘4K-like’ image on your display, but underneath it’s only rendering at an internal resolution of 1440p.

Early on, you might’ve heard of techniques such as checkboard rendering and temporal injection, but technologies have advanced considerably since then.

The AI-powered DLSS is the best technique in the business

DLSS is NVIDIA’s game-changing answer to image reconstruction. It’s by far the best technique in the business, producing results that aren’t only easily comparable to native resolution rendering, but are more often than not even better.

It’s possible as these algorithms are trained against thousands of absurdly high-res images. So even though a game might be running at a lower resolution, DLSS can infer what it’s supposed to look like at a higher resolution from these images and fill in the gaps.

Image reconstruction isn’t the only step, DLSS then applies a layer of sharpening as needed and can even clean up temporal anti-aliasing artifacts such as trails behind fast-moving objects, which helps it look better than native rendering.

As it extrapolates information from a much higher resolution, DLSS can resolve details that aren’t even there at a lower resolution.

If you’re annoyed by how fine details and distant objects in games tend to shimmer – telephone pole wires are a notorious example – DLSS cleans up this sub-pixel detail for a pristine-looking image free of aliasing, artifacts and rendering errors.

Most importantly, this ‘work smarter not harder’ approach to rendering lets DLSS deliver up to 2X faster performance. With an NVIDIA GeForce RTX 30 Series graphics card and DLSS enabled, you’ll not only get a crisper image, but faster performance too – a win-win for gaming.

What’s more, DLSS is available in several pre-sets – Quality, Balanced, Performance and Ultra Performance. Each one targets your gaming monitor’s output resolution, but with its own input resolution multiplier.

Introduced with the NVIDIA GeForce RTX 3090, DLSS Ultra Performance even makes 8K gaming possible, with a nine-times multiplier that holds up shockingly well.

Why DLSS is so important for real-time raytracing

Raytracing is often labelled as the ‘holy grail’ of computer graphics. Compared to conventional rasterised rendering, however, real-time raytracing is a technique that’s order of magnitudes more intensive.

To run fast, games have long relied on cheap tricks and hacky workarounds. Look closely enough at techniques such as screen-space reflections, and you’ll notice their inaccuracies and artifacts. Whereas raytracing attempts to simulate the physical properties of light and how it bounces and disperses off surfaces, producing accurate reflections, shadows and lighting in the process.

NVIDIA’s cutting-edge RT Cores on NVIDIA GeForce RTX 30 Series graphics cards help speed up ray-traced graphics tremendously, but they don’t eliminate the performance penalty entirely. Raytracing is a true generational leap in graphics – the biggest we’ve seen in over a decade – but it’ll take a hit to your frame rate. That’s why the performance boost DLSS affords is so necessary for raytracing in games.

Enabling raytracing will drop your frame rate, but then you can use DLSS to bring your games back up to speed. DLSS is the secret ingredient that makes raytracing viable, even in games with comprehensive integrations like Cyberpunk 2077.

As detailed in our blog Gaming in 2022 – What you need to know…, you’ve likely used the same old hardware for longer than you ever anticipated.

2016’s NVIDIA GeForce GTX 10 Series graphics cards – such as the GTX 1060 and GTX 1050 Ti – endure to this day, safely securing top spots in Steam’s hardware survey. The GTX 1060 alone accounts for an 8% share of all reported graphics cards – that’s a lot of gamers who are missing out on DLSS and raytracing.

RTX 20 Series was ahead of its time, but needed refinement

While 2018’s NVIDIA GeForce RTX 20 Series first introduced these RTX features to world, they failed to justify a reason to upgrade. As the world’s first real-time raytracing graphics card, the RTX 20 Series was way ahead of its time in retrospect – AMD wouldn’t release raytracing-capable graphics cards until late 2020.

But as tech enthusiasts will know well, the first generation attempt at a new product is not often a home run. It’s as if the RTX 20 Series was almost too advanced for its time, releasing before game developers could properly integrate DLSS and raytracing into their games.

In the few games that supported it at the time, it wasn’t even worth enabling raytracing as it completely tanked frame rates. DLSS couldn’t save the day, as its ‘1.0’ iteration lacked a temporal element for clean upscaling. The RTX 20 Series was cutting-edge but needed refinement.

RTX 30 Series capitalises on RTX features like DLSS and raytracing

That’s where the NVIDIA GeForce RTX 30 Series comes in. It fully capitalises on what made the RTX 20 Series so interesting in concept – AI-enhanced DLSS, real-time raytracing and more – but makes a real-world graphics card that’s a more than worthy upgrade. NVIDIA knocked it out the park with the RTX 30 Series, addressing the RTX 20 Series’ shortcomings, and then some.

Powered by NVIDIA’s second generation RTX architecture – codename Ampere – the real-time raytracing performance of NVIDIA GeForce RTX 30 Series graphic cards is a huge leap over the RTX 20 Series. Armed with brand-new RT Cores and Tensor Cores, raytracing isn’t as much of a performance hog as it once was on this generation of graphics cards.

Plus, it’s aided by the arrival of DLSS 2.0 that’s had its underlying technology overhauled for a massive improvement to image quality.

In the time between the RTX 20 Series and RTX 30 Series, these RTX features gained traction and saw huge adoption among game developers. Cyberpunk 2077 and Metro Exodus: Enhanced Edition are the clearest examples, integrating a whole kitchen sink of RTX features; DLSS, ray-traced reflections, shadows, and lighting.

Importantly, NVIDIA has streamlined the integration of DLSS, to the point it’s now a plug-in for popular game engines such as Unreal Engine. Big-name publishers have integrated it into their cross-studio engines, such as EA’s Frostbite, Activision’s Next-Gen Call of Duty Engine and more. Now, there’s a very high chance you’ll find RTX features in an upcoming game.

Raytracing hardware is also built into the PlayStation 5 and Xbox Series X/S. This commitment clearly shows raytracing is the future of graphics. Going forward, these machines represent the baseline of development. Upgrade to an RTX 30 Series graphics card at Ebuyer, and you won’t be left behind.