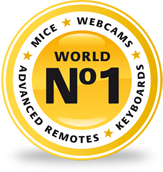 Logitech keyboards let you type in comfort whatever the conditions thanks to a range of corded and wireless designs created to meet different demands. The PerfectStroke™ key system makes typing whisper-quiet and if style is important to you, look out for sleek designs with semi-translucent, black Plexiglas® and brushed aluminium to make a bold statement. 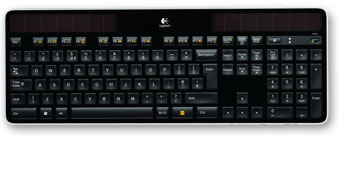 It doesn't get more hassle-free than this. This Logitech K750 keyboard charges itself whenever there's light-and stays charged for at least three months in total darkness-so you can say good-bye to battery hassles. Solar power keeps your keyboard charged and ready - even indoors.

Logitech has made more than a billion mice, so you can expect the best, no matter what you need it for. Features include Bluetooth compatibility while weight tuning and interchangeable grips are a key feature on Logitech gaming mice. Logitech technology means that even when you are away from the office or home, you will be able to use your mouse without a problem. Logitech® Darkfield Laser Tracking™ lets you use your mouse on a variety of surfaces including shiny surfaces and glass. The Logitech® Unifying receiver is a small wireless receiver that fits in your notebook so you can add as many devices as you want without having to plug and unplug constantly. 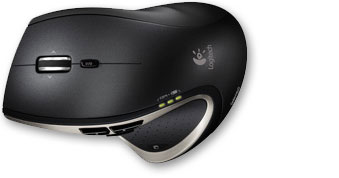 Use the Logitech® Performance Mouse MX™ on virtually any surface including glass tables thanks to Logitech® Darkfield Laser Tracking™. A tiny wireless receiver stays in your notebook while you fly through documents at super fast speed, yet stay comfortable with the sculpted design. Put the power in your hand.