When TVs were first developed they relied on CRTs which work by scanning a beam of electrons across the surface of a phosphorus tube. This beam causes a pixel on the tube to glow, and when enough pixels are activated quickly enough the CRT can give the impression of full motion video. Believe it or not, these early TVs had 60Hz refresh rates primarily because the United States power grid is based on 60Hz AC power. Matching TV refresh rates to that of the power grid made early electronics easier to build, and reduced power interference on the screen.

By the time PCs came to market in the early 1980s, CRT TV technology was well established and was the easiest and most cost effective technology for utilize for the creation of dedicated computer monitors. 60Hz and fixed refresh rates became standard, and system builders learned how to make the most of a less than perfect situation. Over the past three decades, even as display technology has evolved from CRTs to LCD and LEDs, no major company has challenged this thinking, and so syncing GPUs to monitor refresh rates remains the standard practice across the industry to this day.

Problematically, graphics cards don't render at fixed speeds. In fact, their frame rates will vary dramatically even within a single scene of a single game, based on the instantaneous load that the GPU sees. So with a fixed refresh rate, how do you get the GPU images to the screen? The first way is to simply ignore the refresh rate of the monitor altogether, and update the image being scanned to the display in mid cycle. This we call 'VSync Off Mode' and it is the default way most gamers play. The downside is that when a single refresh cycle show 2 images, a very obvious "tear line" is evident at the break, commonly referred to as screen tearing. The established solution to screen tearing is to turn VSync on, to force the GPU to delay screen updates until the monitor cycles to the start of a new refresh cycle. This causes stutter whenever the GPU frame rate is below the display refresh rate. And it also increases latency, which introduces input lag, the visible delay between a button being pressed and the result occurring on-screen.

Worse still, many players suffer eyestrain when exposed to persistent VSync stuttering, and others develop headaches and migraines, which drove us to develop Adaptive VSync, an effective, critically-acclaimed solution. Despite this development, VSync's input lag issues persist to this day, something that's unacceptable for many enthusiasts, and an absolute no-go for eSports pro-gamers who custom-pick their GPUs, monitors, keyboards, and mice to minimize the life-and-death delay between action and reaction. 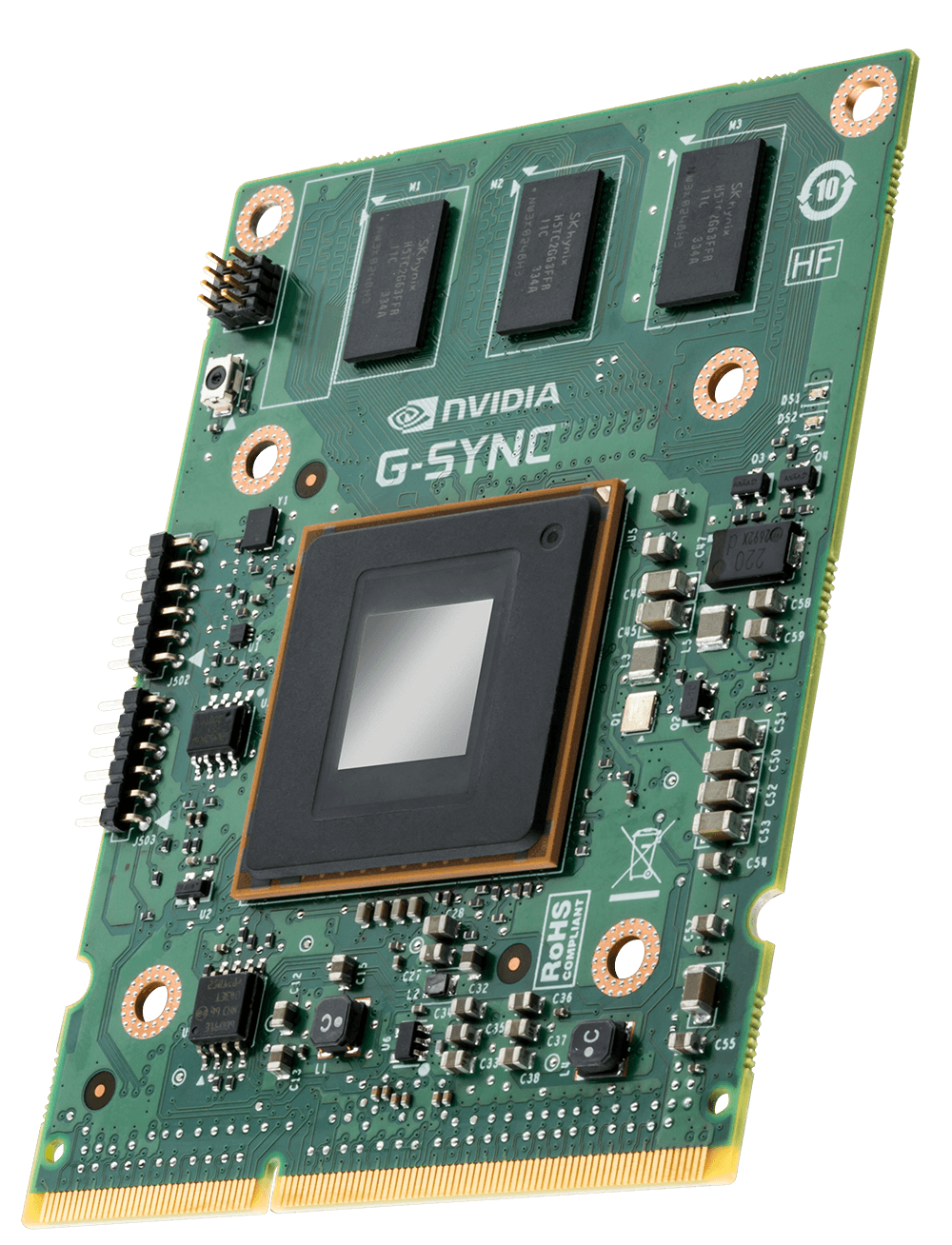 Enter NVIDIA G-SYNC, which eliminates screen tearing, VSync input lag, and stutter. To achieve this revolutionary feat, we build a G-SYNC module into monitors, allowing G-SYNC to synchronize the monitor to the output of the GPU, instead of the GPU to the monitor, resulting in a tear-free, faster, smoother experience that redefines gaming.

Industry luminaries John Carmack, Tim Sweeney, Johan Andersson and Mark Rein have been bowled over by NVIDIA G-SYNC's game-enhancing technology. Pro eSports players and pro-gaming leagues are lining up to use NVIDIA G-SYNC, which will expose a player's true skill, demanding even greater reflexes thanks to the unnoticeable delay between on-screen actions and keyboard commands. And in-house, our diehard gamers have been dominating lunchtime LAN matches, surreptitiously using G-SYNC monitors to gain the upper hand.

Online, if you have a NVIDIA G-SYNC monitor you'll have a clear advantage over others, assuming you also have a low ping.

How To Upgrade To G-SYNC

January 7th update: if you're as excited by NVIDIA G-SYNC as we are and want to get your own G-SYNC monitor, we have some exciting news. As we have announced at CES 2014, partners included Acer, AOC, ASUS, BenQ and Philips will be bringing their very own monitors, powered by NVIDIA G-SYNC, early this year. 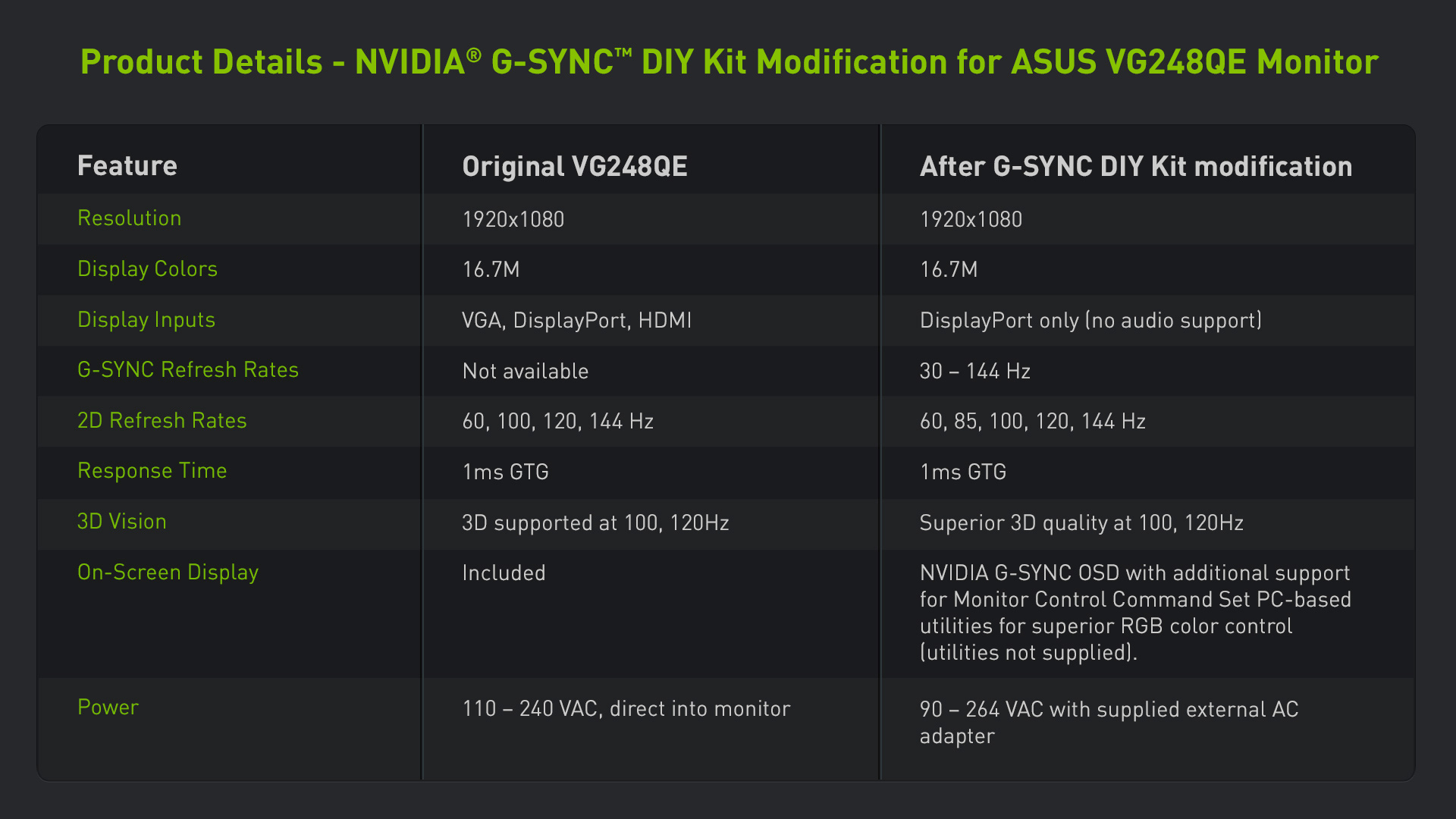 The specifications of an ASUS VG248QE, before and after an upgrade to NVIDIA G-SYNC.

A Groundbreaking Revolution Has Arrived

In this time of technological marvels, there are few advances one can truly call "innovative", or "revolutionary". NVIDIA G-SYNC, however, is one of the few, revolutionising outmoded monitor technology with a truly innovative, groundbreaking advancement that has never before been attempted.

G-SYNC's elimination of input lag, tearing, and stutter delivers a stunning visual experience on any G-SYNC-enhanced monitor; one so stunning that you'll never want to use a 'normal' monitor ever again. In addition to cutting-edge changes to the viewing experience, multiplayer gamers will receive a significant competitive advantage when G-SYNC is paired with a fast GeForce GTX GPU and low-lag input devices, something that'll surely pique the interest of shooter aficionados. For eSports players, NVIDIA G-SYNC is an essential upgrade. With G-SYNC's removal of input lag, successes and failures are squarely in the hands of players, differentiating the pros from the amateurs.

If, like eSports pros, you want the clearest, fastest, smoothest, most responsive gaming experience possible, NVIDIA G-SYNC monitors are a game-changer, the likes of which cannot be found anywhere else. A true innovation in an era of iteration, NVIDIA G-SYNC will redefine the way you view games.