Prebuilt gaming PCs are back in vogue. Sort of. Of course there’s still many gamers out there who prefer to build their own computer. That’ll never change. But after years of some pretty poor efforts from mainstream manufacturers prebuilt gaming PCs are making a comeback. And it’s all thanks to the smaller more specialised brands providing some fantastic gaming computers matching anything a scratch builder can produce. And at a lower cost.


While many PC builders won’t admit it, and I’m in no way trying to convert them, with the costs of components going up it’s now cheaper to buy a prebuilt gaming PC than putting it together yourself. And you’ll get a higher specification for your money.

Not convinced? Here’s some advantages prebuilt gaming PCs have over custom builds.

As I’ve already mentioned the costs of high-performance prebuilt PCs have tumbled. Match them against comparable custom builds and it’s cheaper to go ready-made. Prebuild companies are able to buy their components in bulk. This drastically reduces their costs. But it isn’t just the final price you have to consider.


With a prebuild PC you’re able to spread the cost of your new computer by using finance. This often allows to go for a higher spec machine than if you had to pay in a single lump sum. If you’re building your own gaming PC this option isn’t open to you.

Custom builders have to scour the internet to find the case and components they need. Of course some will enjoy the hunt. But finding the right components from different sites can be a pain in the backside. And then you’ve got different delivery schedules and prices will vary widely between sites.


Buy a prebuilt gaming PC and you only make one purchase. No scrambling around trying to find that elusive graphics card and of course you know the exact cost up front.

Prebuilt gaming PCs will come with a warranty. Most will have extended warranties should anything go wrong. If anything does malfunction it’s easily rectified.


But custom builders are on their own. They’ve no single port of call and will have different warranties on every component. If anything goes wrong they’ll have to sort it out themselves and juggling warranties from different suppliers can be a nightmare.

When you buy a prebuilt gaming PC you’re also getting customer support. If you have any issues, need some advice or information the support is there to help you. Of course different companies provide different levels of support but at least it’s there. A custom builder doesn’t have this and will have to resolve any problems on their own. Or turn to random and sometimes poor advice on internet forums.

Nobody wants to do this. But if the worst comes to the worst and you have to return your computer it’s easy to do so. Most prebuilt gaming PCs companies will arrange a courier to pick up the computer and arrange a refund or replacement.


Custom builders don’t have this luxury of course. If the PC isn’t working they have to dismantle it, track down the defective component and return that to the supplier. The PC is out of action until they get the repaired component back and then they have to rebuild the computer. So much time and effort…


Works right out of the box

We’ve saved the biggest advantage of buying prebuilt gaming PCs until last. And it’s a quite obvious one really. Your new PC works straight out of the box. Click the ‘buy now’ button online and within a few days you’ll have your new PC delivered to your door. Open the box, plug in the PC and you’re ready to go.


And your PC will arrive ready tuned. So, not only do you not have to mess around sourcing components, building the computer and then overclocking or tuning the CPU, GPU etc., you don’t run the risk of damaging anything when setting up. Your prebuilt PC arrives fully tested and ready for battle.

There’s plenty of prebuilt computer suppliers out there. MSI and of course PV Specialist are big names in the space. As are Punch Technology. But a new brand on the scene making huge waves are AlphaSync. 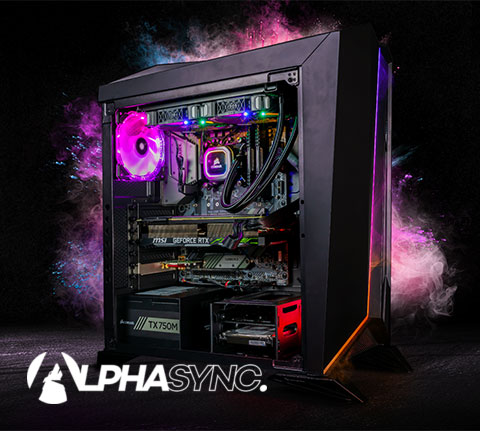 Packed with power the brand new range of AlphaSync gaming PCs are exclusive to Ebuyer. Each PC is loaded with the latest processors, fast graphics cards and come with large capacity hard drives or SSDs.


AlphaSync computers are all hand built to order by a dedicated team of PC builders. Each computer is thoroughly tested. Only when the team are convinced the PC is 100% ready for the customer is it packed for shipping. And all come with a three year warranty as standard.


The new AlphaSync desktops are stunning. But look inside the case and you’ll see they are super-high spec PCs. Intel and AMD Ryzen processors deliver unbeatable performance. And NVIDIA graphics bring every game vividly to life.

Entry level PCs are available for under £500. Yet these computers include Ryzen processors, 1TB HDDS and 120GB SSDs.