Ebuyer stocks smart home devices and a range of many accessories to suit. Take a look (below), or use the search options on the left of the page to bring your home into the modern age. The ability to be in total control of the nuances of your home's temperature has never been easier. And for the ultimate in stylish smart control for your home's heating system, Ebuyer offers a range of high quality smart home products by trusted brands. 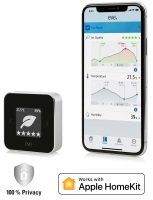 Control the heat in your home with smart heating

Controlling the temperature of the environment has been one of life's main driving forces since the dawn of man. From those first fires in caves through to the Roman's invention of underfloor heating, and onwards to the 20th-century advent of a central system in suburban homes, there has been consistent progression. Without doubt, the most significant development during the last decade or so has been smart heating. As more and more home-owners have become familiar with the benefits of setting up a smart home, almost all of a household's daily functions have become controllable from a central interactive hub device. Keeping in control of your heating system with the ultimate ease is the digital dream scenario.