The first thing we need to understand is how a PC functions. Central to that is understanding the role of the CPU.

What is a computer processor?

A computer has a processor, also known as the CPU (Central Processing Unit). This acts as the brain of the computer. It’s responsible for initiating every task you ask your computer to complete and works together with your PC’s memory to achieve them.


To be able to run applications on your PC, the CPU uses a process called the fetch-decode-execute cycle. Here’s what that cycle looks like: 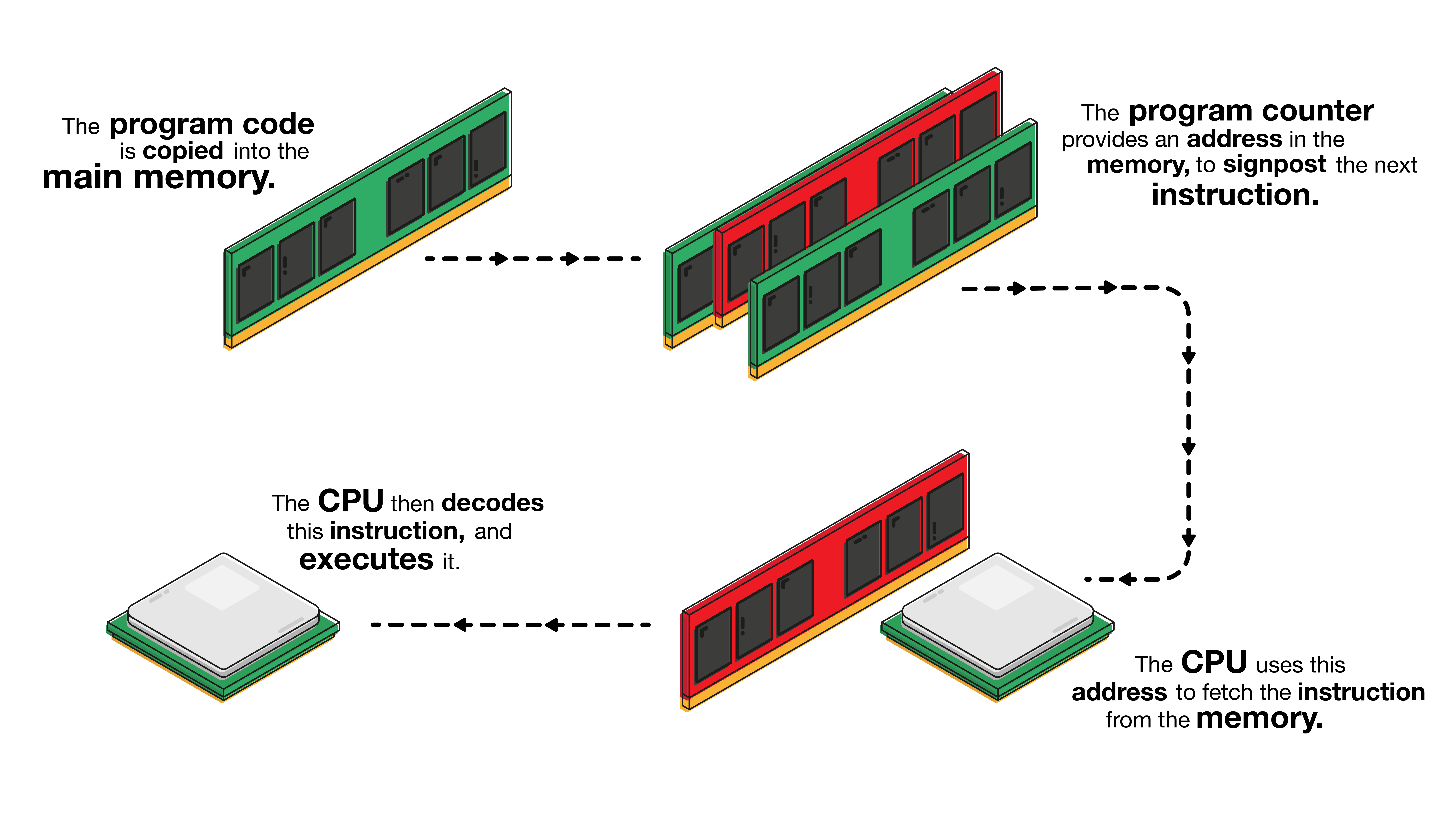 CPUs usually have more than one core. Many have dual, triple or quad cores, and these multi-core processors can handle more tasks at any one time. Multi-threading is used by some programs and operating systems to allow each core to carry out many tasks at any one time, increasing the multi-tasking ability of your PC.


The speed of a CPU is also known as the clock speed, and it’s measured in megahertz or gigahertz. Every PC has a maximum clock speed, but sometimes it’s possible to manually override this to make your computer run faster. (This is called overclocking.)


The CPU uses small amounts of temporary memory, called cache, to hold program data that it is currently resolving. There are often multiple layers of cache on a modern CPU:


What is a computer RAM?

RAM is memory that works with your computer’s processor to carry out tasks. It’s only temporary memory. RAM (random-access memory) can transfer data faster than a hard drive. It is used to store applications, programs, and data that‘s being used.


This information isn’t committed to long-term memory (i.e. the hard drive), unless it’s intentionally saved. RAM is volatile memory, meaning it requires power to store data. Information held there will disappear when the computer is turned off.


The speed of RAM is measured in MHz (Megahertz), so if RAM is rated as 1600MHz, it can complete 1.6 million cycles per second. The higher this figure is, the more quickly it can retrieve data from the hard drive and share it with the CPU as it is requested. In standard PCs, the most common measurements of RAM available are 4GB, 8GB, 16GB and 32GB. Higher capacity RAM allows a system to run operations that require a lot of data on-hand at any one time. Or they can keep data available for more programs at once, improving multi-tasking performance. 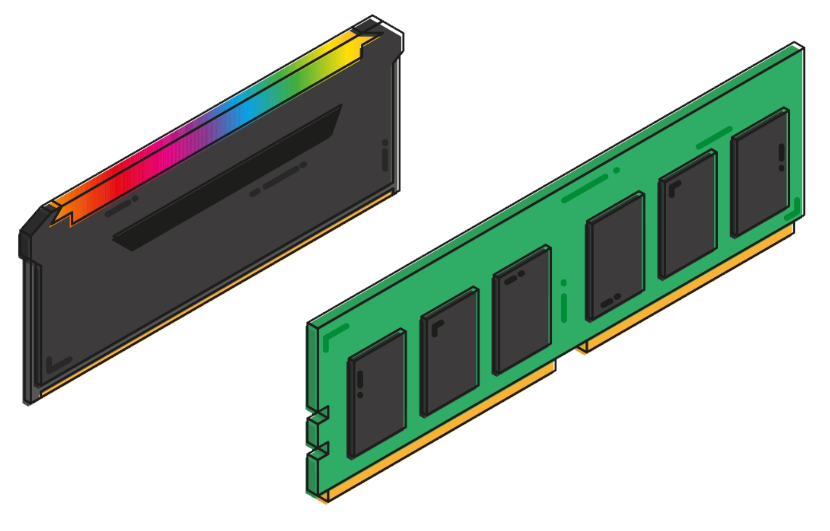 ROM (read-only memory) is persistent across sessions. The most important piece of ROM is the BIOS (Basic Input Output System) chip. It contains vital information including the start-up instructions for your PC or a component. ROM is non-volatile, this means that it holds information when the computer is turned off, unlike RAM that is only temporary.

The hard disk drive (HDD) is the main internal storage of your computer. This non-volatile storage is responsible for storing things like your operating system, applications and programs. It is also used to store data that needs keeping including video or image files, text documents, music, and downloads.


Hard disks can usually be found in a sealed unit within your PC and cannot be accessed. They usually have a magnetic platter for storage which spins at speeds of up to 7,200 revolutions per minute (RPM). A mechanical arm moves the read-write head across this platter and retrieves or stores data, much like the needle on a record player.


Mechanical hard disk drives typically offer the most storage in desktop PCs, and it’s common for their capacity to be as much as 16TB (16 Terabytes). To give you an idea of how much storage that is, just 1 TB is equivalent to 250 movies or 500 hours of HD video! 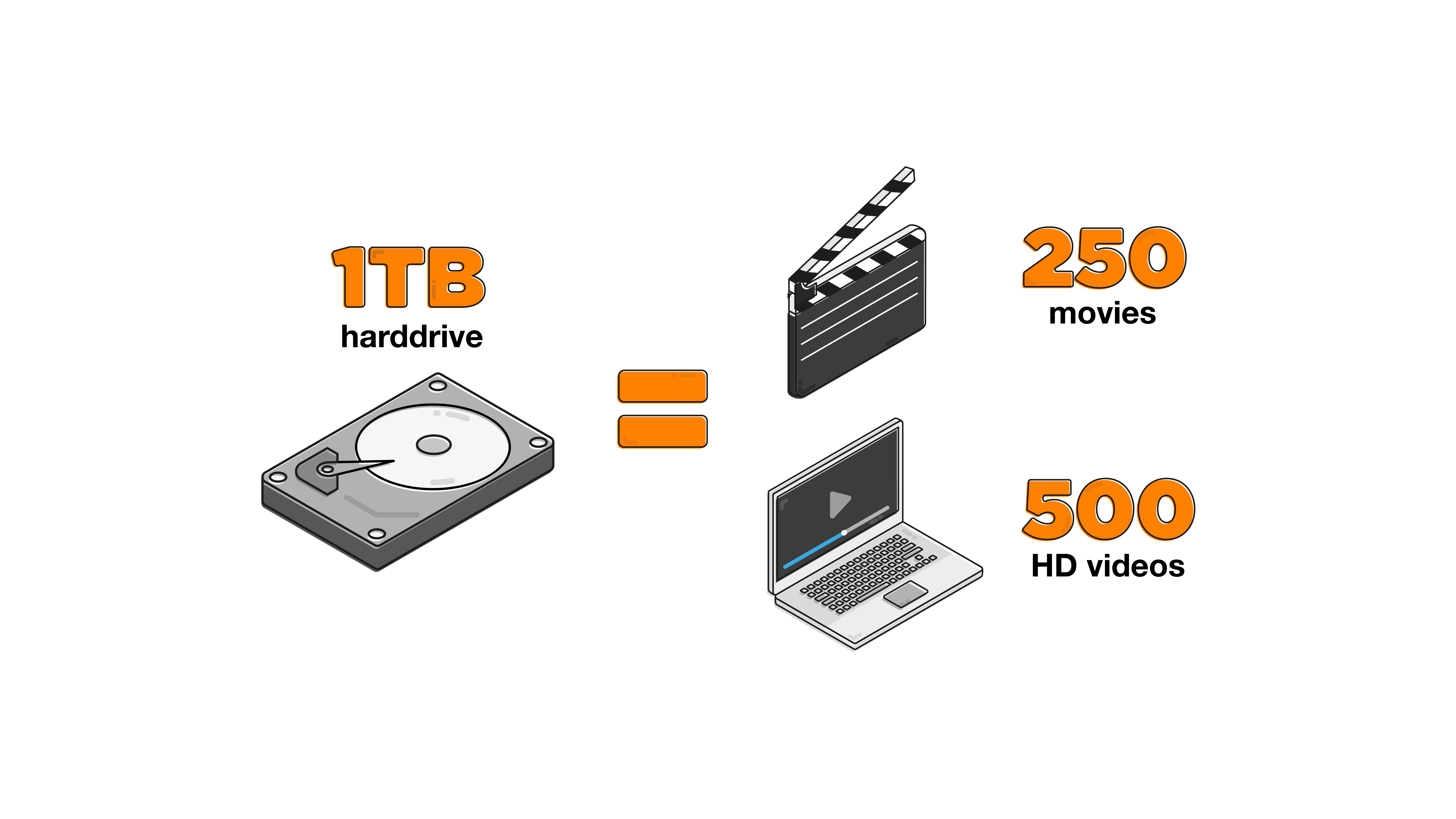 Nowadays computers you’ll often find a solid-state drive (SSD), instead of a hard disk drive. Unlike mechanical drives, SSDs have no moving parts – instead on a magnetic platter, data is stored in semiconductor chips. SSDs have better random read/write speeds than magnetic drives.


SSDs have a lot of advantages. SSDs can read and write data twice as fast as HDDs. They are completely silent as there are no moving parts, and only use around one-third of the power.


Some systems will use traditional hard drives for bulk data storage, and a smaller SSD to store frequently used programs for improved performance, making the best use from a combination of both systems.

What is a motherboard?

When asking “what is a computer”, it’s important to understand what a motherboard is.


The motherboard is the main circuit board which connects your computer’s parts and allows them to communicate. The layout of the motherboard is called ‘form factor’, and this says where each component should connect to. This is one of the key elements which makes a computer work.


The bus which connects the CPU to the memory is called the front-side bus (FSB). The FSB contains two buses of its own, the address bus and the data bus. 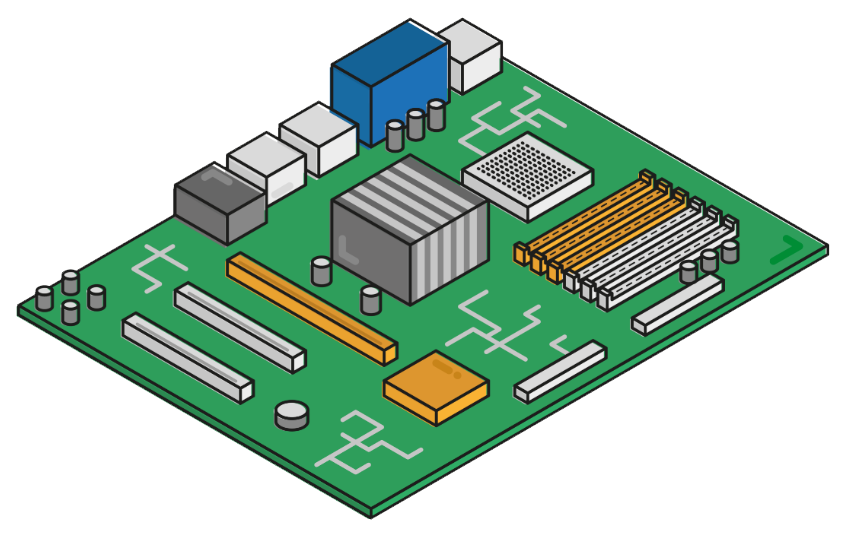 How does a computer get power and how does it work?

The power supply unit (PSU), is the component in your PC which supplies all the other parts with power. It converts mains electricity into low-voltage power, which your PC uses to operate. Without it, your computer would not work.


There are four parts that your power supply contains, which allow it to turn mains electricity into power your PC can use:


What is a graphics card?

A graphics card (GPU) is the part a computer needs to produce images. A graphics card renders every pixel on a screen, letting you to connect with the computer via a monitor. It produces these images multiple times per second to create animations and motion by converting data into information which your monitor can read, resulting in a visual display.


Most computers come with a built-in GPU already fitted as part of the CPU – this is called an integrated graphics card. These are a cost-effective and power-efficient option, but are usually difficult or impossible to replace, as they’re often soldered onto the motherboard or the CPU itself.

For tasks that need a high-quality GPU, some systems contain a separate graphics card that has been made specifically for the purpose of processing graphics. These separate GPUs are called dedicated (or discrete) graphics cards. They have their own video memory, cooling systems and power connectors. Meaning they can render more complex effects and graphics in real time.


The type of graphics card you need for your PC depends on the types of tasks that you will be using it for. An integrated GPU will be perfect if you use your computer for internet browsing and creating documents. Having a dedicated graphics card for applications such as gaming, editing or designing will make a big difference to the experience. 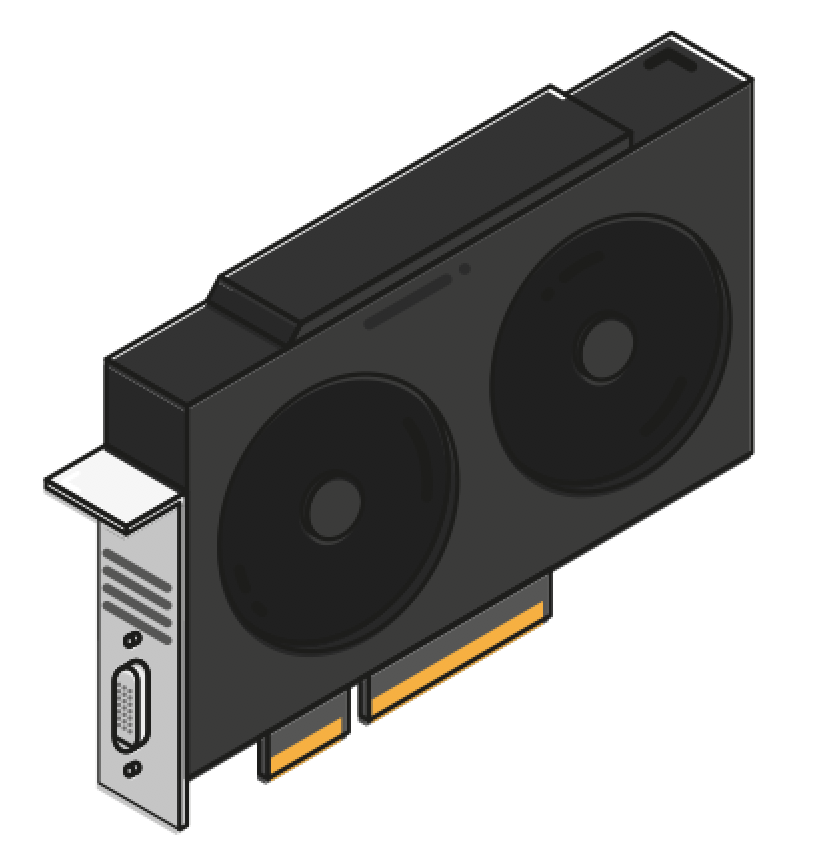 How does a computer’s Cooling System work?

All computers generate heat as they work. If this heat becomes too intense, it can damage your PCs internal hardware. In order to keep your computer working properly, most PCs have a built-in cooling system to keep a suitable temperature range.


Every part will generate some amount of heat as it runs, and the heat increases as more power is used. If the cooling system in a computer is insufficient, heat can exceed the maximum operating temperature of your components. This causes them to slow down so they generate less heat – a process called thermal throttling – until temperatures return to acceptable levels. While this prevents damage to your system it will also harm performance. It is therefore essential that all computers are fitted with suitable cooling, and the vents are kept clear to allow air to flow through the case.

Over-heating can affect your hardware, as the parts will expand slightly when they get hot, then contract when they cool down. Over time, this could weaken components until they crack or stop working altogether.


Most PCs will use cooling fans, which direct cooler air from outside the case over a radiator that emits heat to be carried back out of the case. Components that generate the most heat, typically the CPU and GPU, will be connected to a heat-pipe, which conducts heat directly to the radiator.


There are other cooling solutions such as liquid. This method uses a series of tubes filled with coolant, which is pumped through a heat sink connected to the CPU or GPU. The liquid absorbs the heat from the component, and travels to the radiator, where it cools down again. The major draw of liquid cooling systems is that they’re much quieter and outperform air-cooled systems.


Put your knowledge to the test with our fun PC anatomy quiz. Can you tell us what a computer is?