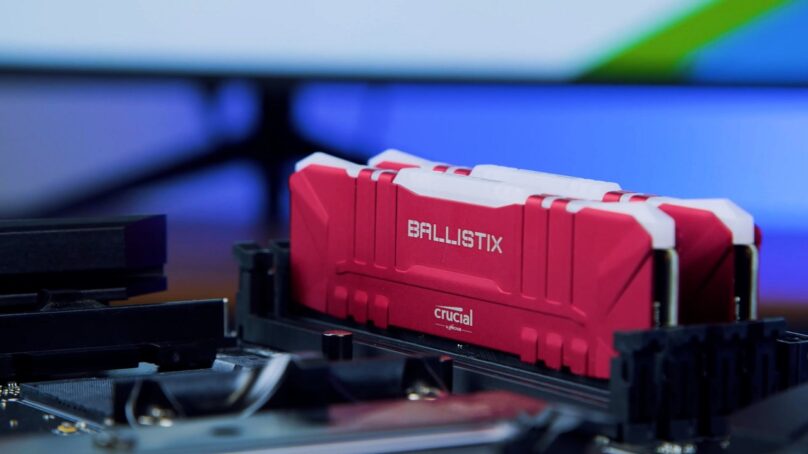 One of the most common criticisms levelled at gaming PCs is the complexity of the platform. Die-hard PC gamers love it, tinkering to their heart’s content… But for a newcomer it can be daunting, if not overwhelming.

As the main contributors to performance, CPU and GPU are easy enough to pick out – get the best your budget can afford. As you progress further down a gaming PC’s spec-sheet, however, things might start to get confusing.

With weird naming schemes, how do you weigh up a Prime A520M-K versus a B450M PRO-VDH Max?! Here’s the specs you should be looking for.

Advice on memory – or, accurately, RAM to avoid confusion – remains steadfast, even with the advent of a new console generation and ongoing hardware shortages, as detailed in Gaming in 2022 – What you need to know. Compared to other, more sought-after components, RAM’s pricing has stayed relatively calm. For a gaming-grade rig, you should be looking for at least 8GB, 16GB, or 32GB of RAM in a dual-channel configuration running at 3,000MHz.

Really, unless you’re on a severely restricted budget, there’s no compelling argument not to opt for 16GB in today’s market. Yes, you could feasibly make do with only 8GB, but it’s stretching it needlessly thin. Halo Infinite, Forza Horizon 5, Resident Evil Village – 8GB is listed as a ‘minimum requirement’ for any recent triple-A game. Or, alternatively, 8GB is needed to simply boot the game. If you’re wanting to play at a decent graphical pre-set and frames-per-second target, the ‘recommended requirement’ commonly jumps to 16GB.

Additionally, games are not the only program running on your system which use up RAM. From the seemingly inconsequential background processes controlling your rig’s RGB lighting to your VoIP client, internet browser and operating system itself, it all happily chews up RAM. Maintain a lightweight Windows installation with scrupulous checks for RAM-hungry programs and you may scrape by with 8GB, but for carefree multi-tasking, 16GB is clearly advantageous.

RAM is easy to upgrade

Have a pre-built gaming PC or gaming laptop which only shipped with a single stick of 8GB RAM? Out of all a gaming PC’s components, RAM is by far the easiest to upgrade. As there are no delicate or fragile pins, clumsy screws or cables – only pushing down on plastic tabs to easily slot in an extra 8GB.

16GB of RAM is the sweet spot

16GB is frequently cited as the sweet spot for a gaming PC, and for good reason. It’s affordable enough to easily justify, without blowing your build’s budget or wasting money which could’ve been spent more productively elsewhere. A general rule of thumb to adhere to is cross-reference a gaming PC with what’s available on the console side. Last-gen consoles used 8GB of RAM. Now, the current-gen consoles – PlayStation 5 and Xbox Series X – use 16GB of RAM, albeit unified.

Picking up two sticks of RAM – two 8GB rather than one 16GB – allows you to run them in dual-channel for a noticeable bump in performance. Lastly, the RAM’s rated speed influences performance too. Mostly for AMD Ryzen CPU-based gaming PCs, as their ‘chiplet’ architecture means they’re heavily dependent on fast RAM. As mentioned, 3,000MHz is roughly what you should be aiming for. 3,200MHz is readily available and common in many gaming PCs. Faster is appreciated, but you start to hit diminishing returns.

Currently, gaming is deeply associated with live-streaming and content creation, so it would be remiss not to mention 32GB as an option. Purely for gaming, 16GB is more than enough. Simultaneous high-bitrate screen capture and subsequent editing of the footage in programs like Adobe Premiere Pro will demand 32GB. 64GB and more is venturing into the realm of professional-grade workstations.

DDR5 RAM made its debut towards the tail end of 2021. At present, only Intel’s 12th Gen CPUs – codename Alder Lake – support it. As detailed in DDR5 – What you need to know, the brand-new technology has distinct advantages over DDR4. Right now, the tech’s almost too new to broadly recommend, but no doubt it’ll grow into a main-stream product and dethrone the long-standing DDR4.

CPU, GPU, RAM – everything is connected to the motherboard. It’s a bustling hub of electrical highways criss-crossing over each other, enabling lightning-fast commutation between components. A motherboard is an intrinsic element of a computer’s operation, but by itself, it doesn’t have a meaningful influence on any frames-per-second metrics.

All other variables held equal; a bog-standard motherboard will perform near-identical to the flashiest ones, with any changes chalked up to margin-of-error. It’s why, out of all components, we often see people contemplate the motherboard the longest.

Unlike a GPU where you can search ‘RTX 3060 Vs. RTX 3070’, for example, and gain an understanding of a product’s advantage, there’s no clear delineation between a high-end and low-end motherboard in regard to performance.

So if you’re not paying for a straight upgrade in performance, the main goal of any gaming PC at the end of the day, what are you paying for exactly? It’s expandability and stability.

As the motherboard doesn’t strongly contribute to the performance of a gaming PC, you’re unlikely to upgrade it as frequently – if at all – as other components. Over the course of a console generation’s worth of gaming, it’s highly likely you’ll slot in some extra RAM or replace the GPU to keep pace with the latest triple-A games, while the motherboard stays the same.

Consequently, it’s important to think of your motherboard as a sound foundation to build upon in the future. Pluck out the cheapest motherboard you can find that’s compatible, and you’ll have a fully-functioning PC in the present, but it may not enable the upgrades you want.

Does a motherboard have enough DIMM and M.2 slots for memory and storage expansion? Is it PCIe 4.0-enabled to make the most of high-bandwidth GPUs and SSDs? What about the tiniest points of four-pin headers for addressable RGB?

You can get up-and-running on the cheap using a bare-minimum motherboard, but if you need to upgrade it to support other upgrades, it’s less cost-effective and a considerable pain too. A new motherboard won’t simply drop in your gaming PC like a graphics card – you’ll practically have to re-build the entire PC from scratch.

On a high-end motherboard, you’re also paying for a toughened power delivery from higher-quality components – voltage regulator modules, capacitors and more. This allows for more stable overclocking, even when pushing a component to the absolute limit of performance.

When viewed from this angle, a motherboard does, indirectly, influence performance. However, the average gamer rarely delves deep into their motherboard’s BIOS to fine-tune a manual overclock. Sophisticated and automatic boosting algorithms do the heavy lifting nowadays.

There’s no point over-paying for a feature you won’t even use. Rather, you could opt for a mid-end board and re-invest the savings into a higher-end CPU or GPU for noticeable gains. Fortunately, motherboards from Intel and AMD are split up in convenient categories. Intel has ‘H’ boards for your no-frills office PC without a dedicated GPU, ‘B’ for mid-end gaming and ‘Z’ for high-end overclocking. AMD has ‘A’, ‘B’ and ‘X’ respectively.

It’s 2022, and it’s safe to say solid-state drives have become the mainstream storage solution for gaming PCs, even budget-focused ones. Throwing back to the rule of thumb mentioned earlier, the biggest upgrade to current-gen consoles over last-gen is their long-awaited inclusion of a super-fast SSD. In games development, consoles represent a handy baseline. Everything’s targeted to run on them first and foremost, and anything weaker slowly gets left behind.

Your rig now needs an SSD to stay future-proofed. Going forward, no-one’s building a gaming PC using exclusively molasses-slow mechanical hard drives. It’s either all-in on SSDs, or a smart combination of both. Leverage an SSD’s blistering-fast speed to accelerate your operating system and game loading times, and a HDD for amassing terabytes’ worth of back-up storage on the cheap.

HDDs are a matured, decades-old technology and this is reflected in their inexpensive cost-per-gigabyte compared to SSDs. It’s the key reason they’ve pervaded to this day. Prices have plummeted and continue to trend downwards, with a gigabyte now worth pennies. Nowadays, you can pick up a 1TB or 2TB HDD for a ridiculously cheap cost. Chuck it in your rig alongside an SSD, and use it to shuffle around larger and larger game installs, without having to needlessly re-download games if your internet’s dead slow and to dodge ‘storage full’ pop-ups.

However, the sheer performance increase of an SSD cannot be understated. Loading times are mere seconds on an SSD, compared to the minutes-long ordeals of a traditional HDD. You’ll get past Window’s tedious boot-up sequence and into the game so much quicker. Simply navigating the desktop, clicking through windows and loading programs will feel noticeably snappier. They’re a must-have for a modern operating system.

On Ebuyer, we stock the two main categories of SSDs – SATA and NVMe – which we’d describe as ‘faster’ and ‘fastest’ respectively. SATA technology predates and has been superseded by NVMe for the most part. It doesn’t mean SATA is completely obsolete for a gaming PC just yet.

As SATA SSDs have been around longer on the market, they’ve already begun to trail HDD’s pricing trend. The most ubiquitous SATA SSDs are in a 2.5” form-factor, requiring data and power cables for operation. They’re a bit outdated in terms of convenience and performance, though they’re still considerable faster than a slowly-spinning HDD and can be had at heavily discounted prices. If you’re budget restricted, try to squeeze in at least a SATA SSD, it’ll make a great difference in gaming and day-to-day operation.

On the other hand, NVMe SSDs are on the bleeding-edge of performance. They use the M.2 form-factor which conveniently slots into the motherboard, relinquishing the need for cables. Be careful, as not all M.2 drives are necessarily NVMe. Some are SATA-powered, but all consumer-grade NVMe drives are M.2. It’s easy to conflate each other; one describes the form-factor, the other describes the technology.

Like your GPU, NVMe SSDs use the PCIe standard for magnitudes faster data transfer over SATA. We’re talking roughly around 500MB/s on SATA, to a mind-blowing 5,000MB/s and even higher on the latest generation PCIe 4.0 NVMe SSDs. This is what the current-gen consoles use, though you’ll need PCIe 4.0 M.2 slots on your motherboard to make the most of these drives.

These bleeding-edge drives are relatively new and are priced accordingly. The latest NVMe drives are mightily tempting, but you don’t want to blow your build’s budget on faster loading times at the expense of graphics and frame rate. Don’t rule them out entirely because you can’t get terabytes for cheap, however. Consider one as a ‘boot drive’, the main use-case of NVME SSDs for many gaming PCs, 500GB at the minimum.

So, that wraps up this blog on the specs you should be looking for in a gaming PC in 2022! Make sure to check out the rest of the Ebuyer Gaming Hub for other hardware-related news, unboxings and guides – our Gaming PC Build for 2022 is a great starting point after this blog.