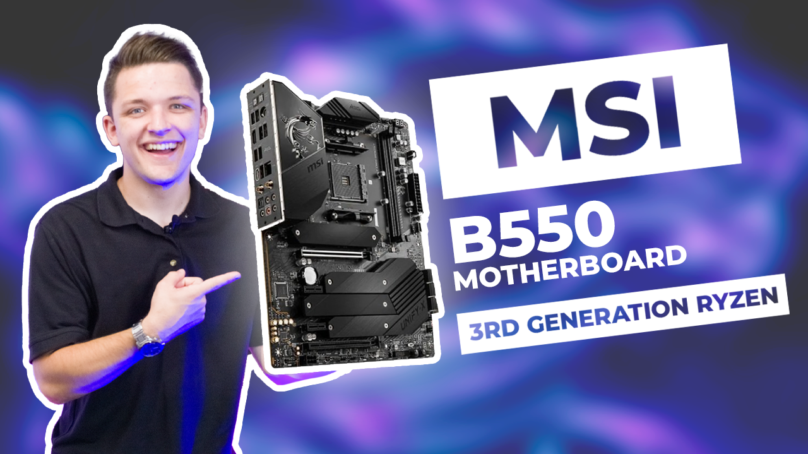 During our recent coverage of the blistering fast Seagate FireCuda 530 and WD_BLACK SN850 M.2 NVMe solid-state drives – both fully compatible with the PlayStation 5 – we required a motherboard capable of next-gen PCIe 4.0 communication to handle the full potential of these drives.

We initially picked out this MSI B550 MEG Unify-X motherboard purely for testing purposes, but we felt compelled to share our hands-on experience with this AMD motherboard after realising how impressive it was.

Let’s quickly run through the motherboard’s stand-out features, cover off all the connectivity, why you’d opt for a B550 motherboard over a cheaper A520 or more expensive X570 board and ultimately whether this should be your next motherboard for an AMD Ryzen CPU-based system.

The motherboard comes wrapped in a protective anti-static bag. Here’s a tip. Don’t toss this out. These bags are always handy for safely packaging PC parts for manufacturer returns or online sales.

Even as PC building enthusiasts, the purpose of one included accessory eluded us. After flicking through the motherboard’s manual for an explanation, it turns out this set of plastic plinths snap together to form a D.I.Y. stand to build your motherboard on.

This might not sound intuitive – why wouldn’t you just build inside the case from the get-go? However, it’s fairly common practice among PC builders to use a stand, a test bench or even the motherboard’s box before the case. Instead of worrying about case screws, stand-offs and cable management before you’ve even tried turning on PC, a stand lets you easily hook up all the components outside the case to ensure they’re functional. Even if you’re confident enough to waive the stand, it’s inclusion alone demonstrates consideration on MSI’s part for PC builders.

Other accessories are your standard fare: obligatory reams of instruction manuals and safety notices, RGB splitters and adapters for Corsair iCue compatible devices, a driver DVD you’ll end up downloading from the internet anyway, a couple of SATA cables for hooking up hard drives and solid-state drives, screws for securing down M.2 form factor SSDs, Wi-Fi antennas and an adhesive MSI badge to stick on your case.

One of the most important contributions a motherboard brings to the table is a selection of ports. The front I/O on your computer cases is practical for plugging in a couple USB-powered devices like your smartphone or external storage, but what about all the other peripherals? On a gaming PC, surely you’ve got a gaming mouse, keyboard, controller – the extensive list of gaming-grade devices goes on. Let’s quickly run through the exhaustive selection of rear I/O on this motherboard, catering to every need.

Saving you an extra fiddly step in PC building, the rear I/O shield comes pre-installed. You rarely encounter this premium level of detail on a B550 motherboard. There’s four USB 2.0 ports, three USB 3.2 Gen 2 ports for super-fast transfer rates, a USB Type 3, a HDMI, a PS/2 for backward compatibility and a standard selection of 3.5mm jacks with an optical audio out.

Many mothers don’t feature wireless internet, relying solely on a wired connection. If sprawling metres worth of networking from your router isn’t an option, the MSI B550 MEG Unify-X comes with latest generation Wi-fi 6 connectivity for increased signal strength and throughput. Read more about Wi-Fi 6 compatible routers, here. The ethernet isn’t any ordinary port either, with support up to 2.5G bandwidth to saturate the speediest connections.

Setting itself apart from other no-frills offerings, the MSI B550 MEG Unify-X motherboard is aimed squarely at PC builders, overclockers and enthusiasts with dedicated buttons for flashing the BIOS and resetting the CMOS.

These features won’t improve the day-to-day operation or performance of this motherboard, but they’re time-saving quality of life enhancements for those who’ll utilise them on a regular basis.

Overclockers push their components to extreme limits, sometimes too far. There’s rigorous preventions in place to safeguard components from permanent damage, but your motherboard’s BIOS might become corrupted or stuck on unstable settings in the process, preventing you from booting.

This might sound disastrous, but resetting the CMOS is routine procedure for reverting all BIOS settings back to default values. On conventional motherboards, this would require powering down the system, opening up your computer cases, locating a small battery on your motherboard, prying it out and after a while inserting it again.

This quite involved set of steps is reduced down to one accessible button press on the MSI B550 MEG Unify-X motherboard so you can tinker to your heart’s content.

AMD motherboards are generous with their cross compatibility. For instance, you can use an AMD Ryzen 5000 series processor on a previous generation motherboard, if updated to a compatible BIOS revision. Here’s the tricky caveat – you’ve traditionally needed a last-gen CPU to perform the update to support the new processor.

Without any hardware installed, the motherboard by itself will perform the update. This saves you a considerable amount of both time and money from sourcing a sacrificial processor just to perform one update.

MSI have gone all-out with features on this AMD motherboard. Even though we’d categorise B550 motherboards as a mid-tier offering in-between A520 and X570, there’s no obvious cost-saving measures employed on this motherboard.

Everything’s built to highest quality we’d come to expect from a more expensive X570 board, at a more affordable price tag. With support for the latest generation AMD Ryzen processors and four RAM DIMMs supporting dual-channel DDR4 memory up to a staggering 5300MHz.

The completely all-black design is a far departure from the exhausting ‘gamer aesthetic’ of most motherboards and their overindulgent use of RGB lighting. You’ll find no distracting RGB on this motherboard, making the high-quality components stand out even more.

Trying to diagnose issues with your PC by deciphering the cryptic bleeps emitting from your motherboard’s tinny speaker can be headache-inducing. It’s a painfully inefficient method which MSI has sought to rectify with a small LED display on the top-right of this motherboard.

If something’s gone wrong – the PC isn’t posting for PC for instance – it will display a two-digit error code which you can then reference in the motherboard manual for an in-depth explanation. The importance of this feature for first-time and even experienced PC builders cannot be overstated. It’s nerve-racking when a PC doesn’t turn on – did you do irreversible damage to the hardware? A lot of the time, it’s something as simple as RAM installed in the wrong configuration. The LED display will save you from jumping to conclusions. It’ll display ‘A1’ when everything’s running A1 which is a quite funny – and helpful – touch.

If you’re using the included stand to build your motherboard on, how are you supposed to turn it on without the computer case’s power switch? In a similar vein to the CMOS/BIOS buttons, there’s also power and reset switches integrated onto the motherboard.

Usually, you’d have to jump-start the motherboard by bridging the front panel connectors with a screwdriver. This hacky workaround isn’t exactly user-friendly, and first-time PC builders might not feel comfortable poking and prodding their motherboard with a screwdriver. There’s nothing worse than the sinking feel you experience when your brand-new PC build doesn’t boot as expected. Having these dedicated buttons simplifies PC building by letting you regularly check everything’s OK as you go along.

PCIe 4.0 is one of the primary reasons for upgrading to a B550 motherboard over a cheaper A520 motherboard. Fully embracing PCIe 4.0 communication, the MSI B550 MEG Unify-X goes all-out with a whopping four PCIe 4.0-powered M.2 slots for compatible solid-state drives to address any demands.

The PCIe 4.0 expansion card slot for your motherboard also features reinforced shielding to help prevent GPU sag. With such an abundance of information flowing through small form factor M.2 drives, they can get a bit toasty. Fortunately, each M.2 slot come with double-sided heat spreaders to keep properly cooled for extended use and maximum performance.

The cooling solution doesn’t stop there. The massive aluminium heatsinks are immediately apparent, with thermal pads beneath to appropriately regulate the frankly excessive power delivery on this motherboard.

We’ve never seen so many VRMs on a X570 motherboard, let alone this supposed ‘mid-range’ B550 motherboard! Paired with the additional 6-pin connector to supply extra power to other components, it unlocks heightened overclocking headroom for maximum performance.

On the Ebuyer YouTube channel and guest presenter James’s own personal channel GeekAWhat (get yourself subscribed to both) James goes through a copious amount of motherboards for a broad range of builds. He’s put together budget-focused systems all the way up to all-out gaming rigs with cumulative price tags in the thousands. Yet the MSI B550 Unify-X is easily on the best B550 motherboard he’s come across.

Check out the MSI B550 MEG UNIFY-X motherboard, over at Ebuyer.