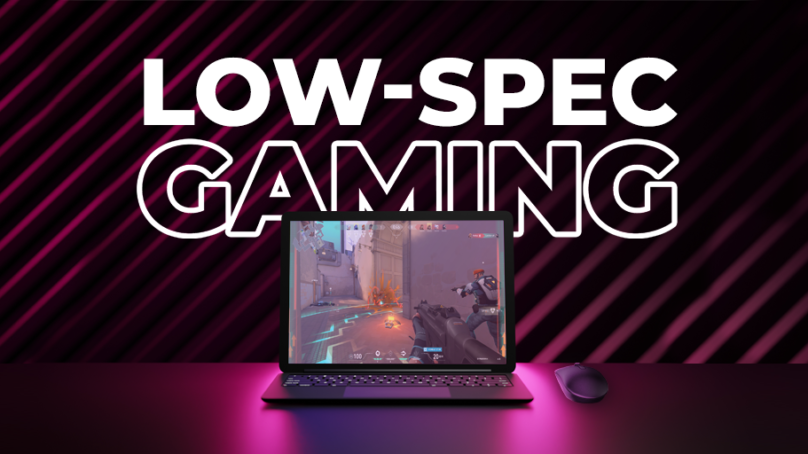 Can you game on integrated graphics?

So, you’ve failed to cheekily convince your parents that a fully-fledged gaming PC was a worthwhile investment for your university endeavours. Your dreams of pulling off a devilishly devious heist, walking away with RTX-equipped gaming PC for ‘faster work processing’, are shattered.

It was a nice dream, admittedly unrealistic, but now the only computer you’ve desperately scraped together is a bog-standard laptop with pitiful integrated graphics. An overwhelmingly crushing defeat. How is this machine supposed to game?

All hope is not lost, however. There are plenty of games outside the big-budget blockbuster bubble that’ll run on integrated graphics. Let’s make the most of what you’ve got!

For comforting reassurance, take a look at the Steam Hardware Survey for a clear reminder that not everyone’s running the latest and greatest hardware. Multiple generation old and budget-orientated graphics cards densely populate the results, with AMD and Intel integrated graphics sprinkled in for good measure. What games are these people playing?

Some of the most popular games are intentionally engineered to run on outdated and underwhelming hardware. Competitive e-sports games are the go-to example. These games are enjoyed on integrated graphics the world over – whether on a university student’s ‘study laptop’ or on internet café’s poorly performing PCs. Frames-per-second reigns supreme in e-sports, so demanding graphical effects are kept to a minimum to not bottleneck the upper limits of performance.

We’re not talking about a poor, bare-minimum gameplay experience either, marred with micro-stutters, inconsistent jitters and disorientating frame rate fluctuations. For the vast majority of gameplay, integrated graphics are more than enough to reliably lock to an unwavering 60 frames-per-second. This is the rightful standard PC gamers have come to expect.

There’s also significant crossover between e-sports and free-to-play games. League of Legends, Valorant, Dota 2, Counter Strike: Global Offensive – some of the highest played games are completely free. This removes one of the main barriers to entry, with the end-user’s PC specifications being another. Having bare-minimum hardware requirements allows anyone to try out the game, regardless of their PC’s capabilities. It’s clearly in the developer’s best interests to target lower-end hardware, making the game as readily accessible as possible.

Let’s highlight the world-wide sensation Fortnite. With millions of monthly active users playing on next generation consoles all the way down to smart phones, the game is extremely performant across the board.

If storage considerations are also a concern, you can manually opt-out of high-resolution textures too. Since you’re going to be running a lower resolution on integrated graphics anyway, this is a worthwhile trade-off!

Epic provided a couple examples of the typical FPS values seen by laptops running with the standard low scalability pre-set, compared to Performance Mode, running at 720p. Before, a laptop with integrated Intel UHD Graphics 620 reached a cinematic, console-certified 24 frames-per-second. After, 61 frames-per-second. These aren’t exactly mind-blowing numbers for saturating a high refresh rate display, but it’s an impressive demonstration of integrated graphics capabilities in a fully 3-D, open-world game.

An exciting development for low-specification gamers are image reconstruction and upscaling techniques like AMD FidelityFX Super Resolution (FSR). Their main objective is to upscale games from a lower internal resolution producing comparable results to native rendering. These should, in theory, be essentially ‘free performance’. Their awkward caveat being potentially compromised image quality and shimmering artifacts.

When you’re in the heat of an intense battle, are you really going to notice a not-so pristine resolution? Especially on a smaller form factor laptop display, it’ll be harder to notice. Similar techniques are also integrated directly into the latest game engines. Keep a keen eye out for resolution sliders , ‘temporal upsampling’, ‘checkerboard rendering’ and the like.

If you’re desperately intent on playing the latest AAA games from the big-name publishers, the world of low-specification gaming is weird and wonderful. You’ll quickly become accustomed to altering configuration files for lower-than-low graphical settings, dabbling in the modification community for more in-depth engines tweaks and tinkering with operating system and graphic driver options to tease out every last drop of performance. For instance, DXVK can potentially double your frames rates, learn more about it here.

It’s definitely not a pick-up-and-play experience – especially if you’re coming from a streamline console experience – but it’s a surprisingly effective training ground to gain more experience with learning the underlying fundamentals of your PC. You’ll learn your ‘.ini’ from your ‘.dll’, how to perilously navigate intimidating file structures and what settings like ‘temporal anti-aliasing’ actually mean.

While fear of missing out is a very real phenomenon, the limited capabilities of integrated graphics may finally force you to play through your overwhelming Steam back catalogue, instead of only playing the latest releases.

Think of how many dirt-cheap games you’ve instinctively bought over the years, just to toss them on an ever-growing pile of games you’ll ‘eventually’ play. They’re too tempting to pass up, you tell yourself, they’re practically giving them away! These games are probably years old at this point, enough for modern integrated graphics to run. Now’s the perfect opportunity to try some game from 2004 you bought for 50p on a whim. You may randomly stumble upon a classic!

Most importantly, gaming-grade peripherals aren’t exclusively relegated to gaming PCs. They’ll work on anything, regardless of specifications. There’s still the opportunity for a sweet set-up, with a mechanical keyboard, lightweight gaming mouse and a gaming headset. Check out our comprehensive guide of which gaming mouse features to carefully consider.

That’s what makes PC gaming so great. Not the endless obsession with the latest and greatest hardware, but the diverse flexibility the platform affords. Run on a fully-fledged gaming PC or a laptop’s integrated graphics, with cutting-edge, ray-traced graphics or competitive, e-sports settings. Play where you want, how you want. Gaming on a laptop with integrated graphics is a completely viable option.

Check out Ebuyer’s huge back to school sale with everything you need for the new academic year.

Should you bring a gaming PC to university?