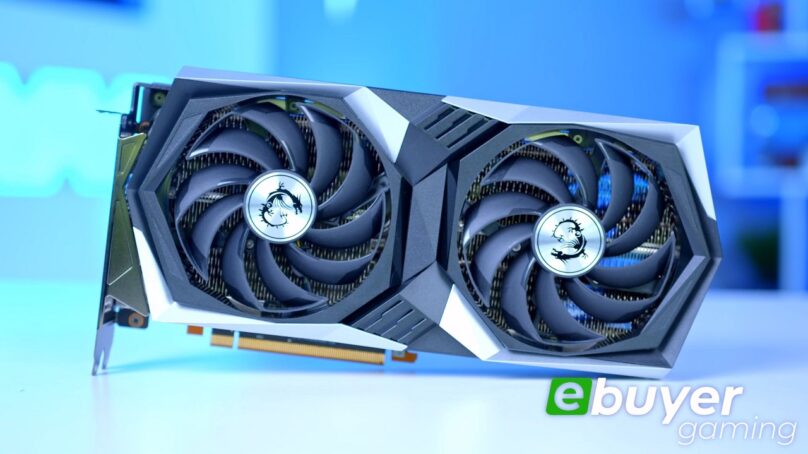 Launching alongside the 6750 XT and 6950 XT, the AMD Radeon RX 6650 XT is AMD’s latest entry-level graphics card for 1080p gaming at high frame rates. As with every RX 6000 Series card, the 6650 XT is built on the ground-breaking RDNA 2 GPU architecture, which delivers a superb experience for gamers. Let’s walk through the 6650 XT’s key specs and how they compare against the standard 6600 XT, and put it through its paces in the latest games.

You can think of the AMD Radeon RX 6650 XT as a refreshed, beefed-up version of the standard 6600 XT. Both graphics cards feature 32 Compute Units and 32 Ray Accelerators for hardware-accelerated raytracing, as well as 32MB of low-latency Infinity Cache and 8GB of fast GDDR6 VRAM. As mentioned in our blog What is a graphics card…, 8GB of VRAM is recommended for handling the high-res textures of big-budget games.

To demonstrate the AMD Radeon RX 6650 XT’s performance, we’re not going to rely on any benchmarks provided by AMD, as we’ve already ran in-house testing ourselves.

Make sure to check our video It’s here! AMD Radeon RX6650XT Graphics Cards. First Impressions and Benchmarks… over on the Ebuyer YouTube channel, in which guest presenter James gives his hands-on impression with the AMD graphics card and benchmarks it in the latest games, including: Battlefield 2042, Call of Duty: Vanguard, Forza Horizon 5, and more. But let’s walk through the results right here as well.

For context, these benchmarks were ran on an AMD Ryzen 5 CPU-equipped gaming PC with AMD Smart Access Memory enabled, or SAM for short. SAM smartly combines the power of an AMD CPU and an AMD GPU for even greater performance; up to a 15% boost according to AMD. You can learn more about how it works in our gaming blog Smart Access Memory with AMD and AlphaSync…

The model of AMD Radeon RX 6650 XT used was the factory-overclocked MSI Gaming X, which has a faster boost clock over the reference model of 2,416MHz right out of the box. Featuring a dual-fan cooling solution and an all-metal backplate, it represents many of the 6650 XTs you’ll find over at Ebuyer, from the biggest brands of AMD graphics cards, including: PowerColor, Sapphire, XFX, and more.

In the chaotic, destruction-heavy Battlefield 2042, the AMD Radeon RX 6650 XT ran above 100 frames-per-second consistently for an average of 102 FPS. This was at a native 1080p resolution and a high graphics pre-set.

Open-world racing game Forza Horizon 5 – one of the most graphically impressive games around – ran at 98 FPS on the 6650 XT, and this was at 1080p and an ultra pre-set.

For battle-royales, the 6650 XT reached 190 FPS in Apex Legends at 1080p/high, and 242 FPS in Fortnite at ‘competitive settings’. These frame rates are enough to saturate the fastest esports gaming monitors.

According to guest presenter James, the RX 6650 XT’s performance sets it to replace the standard RX 6600 XT as “AMD’s new entry-level beast” for 1080p gaming at high frames rates and as “a nice performance upgrade over AMD’s existing mainstays in the GPU space.”

Alternatively, there’s enough performance headroom to up the resolution to 1440p in exchange for 60 FPS in many games. Forza Horizon 5, for instance, averages around the 60 FPS mark at 1440p on the RX 6650 XT.

The AMD Radeon RX 6650 XT is engineered on the power-efficient RDNA 2 GPU architecture, which delivers 65% more performance-per-watt over RDNA 1. As such, even though the RX 6650 XT pushes a maxed-out gaming experience, it only draws a typical board power of 180W from a single 8-pin connector. To power an entire 6650 XT-equipped gaming PC, AMD recommends a 500W PSU.

This is bumped up from the standard 6600 XT, which draws 160W under load. With a 12.5% power consumption increase over the 6600 XT, you can see where the 6650 XT’s extra performance comes from, despite having the same underlying specs.

As the AMD Radeon RX 6650 XT’s power consumption is relatively low, at least compared to power-hungry cards like the 6950 XT, it doesn’t need a massive cooling solution to keep cool.

Browse Ebuyer range of 6650 XT graphics cards, and you’ll see most of them use a two-fan, two-slot cooling solution. This is more than adequate for a sub-200W GPU like the 6650 XT and means you won’t have too much trouble finding room for it in a gaming computer case, even small form-factor ones like Micro ATX.

Though, if you want the fastest 6650 XT around, there are cards like the XFX MERC 308 BLACK at Ebuyer, with a three-fan cooling solution and a blistering boost clock of 2,694MHz.

AMD’s Radeon RX 6650 XT seizes the title of best entry-level AMD graphics card from the 6600 XT. In our gaming blog Build a Gaming PC for 2022 & Beyond, we put together a 6600 XT-equipped gaming PC and tested it out on Apex Legends and Splitgate. So, check it out and see how it compares to the 6650 XT.