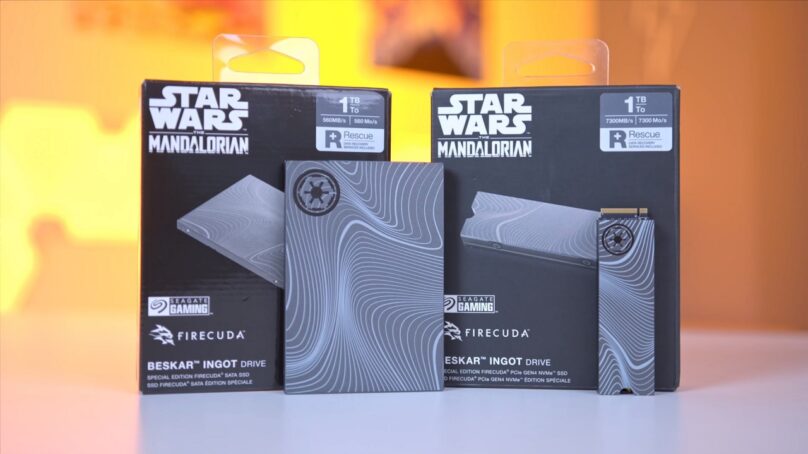 Star Wars fans, get a galactic edge in performance with Seagate’s special edition line-up of Beskar Ingot drives, inspired by The Mandalorian. Built for true collectors who need a galaxy’s worth of storage. We’ve got our hands on two of these drives, the Seagate FireCuda 530 and 120 Beskar Ingot, so let’s run through their feature set to find out if you should pick one up.

As a quick rundown, the FireCuda 530’s PCIe Gen4 interface unlocks ludicrous read-write speeds, handily exceeding the PlayStation 5’s built-in storage. If it wasn’t hinted at already, the FireCuda 530 Beskar Ingot reaches a 7,300MB/s read and a 6,000MB/s write, at least on the 1TB model. That’s twelve times faster than a SATA SSD. The 500GB model drops slightly to a 7,000MB/s read and a 3,000MB/s write.

It’s normal behaviour for larger SSDs to be faster too, as they’ve got more data channels to work with. Moreover, as games stream assets off a drive and don’t move them around, read speeds are more important than write speeds for gaming.

Compare your drive against the FireCuda 530

You’ll find these read-write figure on Seagate’s spec-sheet. To double-check their validity, we’ve ran in-house tests on the FireCuda 530 Beskar Ignot using CrystalDiskMark, our scores are below. Check out our blog WD_Black SN850 Unboxing & Testing… to learn more about CrystalDiskMark and why it’s our go-to software for testing SSDs.

Download it for yourself and see how your current drive scores against FireCuda 530 Beskar Ingot. Given how the FireCuda 530 is one of if not the fastest PCIe Gen4 SSD available at Ebuyer right now, we’re confident in saying this drive’s got you beat!

That’s enough tech talk, let’s turn our focus on what makes this special edition drive stand out – the Star Wars aesthetics. It starts with the unboxing, as it comes in custom packaging you won’t find on any other model of FireCuda 530. Inside is a postcard of The Mandalorian with Baby Yoda hanging out at his side – a nice touch – and the drive itself.

Holding the drive, Seagate’s efforts to make this a true collector’s item haven’t gone unnoticed. They haven’t slapped a sticker over an existing FireCuda 530 and called it a day, they’ve machined a new heatsink just for this line-up. You’ll feel grooves as you run a finger over the FireCuda 530 Beskar Ingot’s Imperial stamp and wavy, Damascus pattern.

This heatsink isn’t just for show either, it’s made in close partnership with EKWB, a leading brand of PC cooling solutions. When it comes to PC cooling, you’re probably concerned about the CPU and GPU, but PCIe Gen4 SSDs can get surprisingly toasty too. It might’ve not been an issue for Gen3 drives, but as Gen4 drives are so fast, they often need a cooling solution.

While PCIe Gen 4 SSDs are great, what if you’ve ran out of M.2 slots on your motherboard, or your CPU-motherboard combo doesn’t support PCIe Gen4? Seagate doesn’t want you to miss out on The Mandalorian love, so that’s where the FireCuda 120 Beskar Ingot comes in.

It’s a SATA-powered SSD and comes in a 2.5” form-factor. Check out the size difference between the FireCuda 120 and 530 in the image below. The FireCuda 530’s small, low-profile design fits into a motherboard’s M.2 slot, whereas the FireCuda 120 slots into a computer case’s drive bay.

It’s great to see that, despite the difference, the FireCuda 530’s design carries over to the 120 with a solid, all-metal enclosure. Nothing’s stopping you from picking up both drives for a full-on Star Wars The Mandalorian rig.

SATA is a matured technology, so while it’s not as fast as PCIe, it makes up for it in capacity and cost. Browse Ebuyer’s range of Beskar Ingot drives, and you’ll see the 1TB FireCuda 120 is notably cheaper than the 1TB FireCuda 530. You’ll want a FireCuda 530 for lightning-fast boot and loading times, while a FireCuda 120 gets you respectable read-write speeds for your larger files at a more affordable price.

What’s more, you can run multiple FireCuda 120 Beskar Ingot drives in your gaming PC, without using up too many of your motherboard’s PCIe lanes.

And while you might not be able to run PlayStation 5 games off SATA SSDs, you can run back-compat PlayStation 4 games off them. Pick up a FireCuda 120 Beskar Ingot drive and a SATA-to-USB adapter for your PS4 games to free up space on your PS5’s internal drive.

What else is included?

In the box for these Beskar Ingot drives, you’ll find a collection of stickers from Seagate, EKWB and Star Wars to customise your set-up with. It’s also worth mentioning Seagate’s fantastic support services included with every Beskar Ingot drive. With a five-year, industry-leading warranty and three years’ worth of data recovery, if your drive happens to fail, you’re in safe hands.

Seagate Beskar Ingot drives, as with all of Seagate’s drives, are extremely reliable. For long-lasting endurance that’ll see you through an entire generation’s worth of gaming, the 1TB model of the FireCuda 530 Beskar Ingot is rated for a 1,275 terabytes written (TBW).

To learn more about these unique, special edition drives and pick one up for yourself, check them out over at Ebuyer: