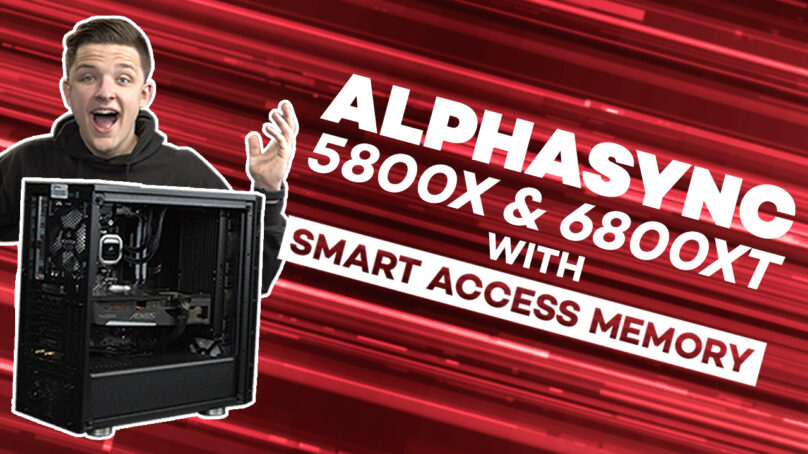 AMD has rocketed from underdog status to being inches away from claiming the performance crown. In its pursuit, AMD has searched high and low to eradicate any pesky bottlenecks standing in the way. Smart Access Memory might be the trick up the company’s sleeve.

We’ll cover what Smart Access Memory is, what you’ll need, how to enable it and testing the feature on an all-AMD AlphaSync gaming PC!

Operating system’s underlying foundations are an incomprehensible mess of legacy systems to ensure decades-worth of compatibility. Honestly, it’s quite commendable though. Sometimes requiring a bit of tweaking, you can get decades-old games up and running on a modern iteration of Windows for a quick nostalgia hit, or experience a classic for the first time.

However, this isn’t so favourable for hardware. You’ve got top-of-the-line graphics cards on the bleeding-edge of performance, running on software with roots in decades past. This results in conflicts with the capabilities of modern hardware.

AMD’s Smart Access Memory, or SAM for short, aims to address one of these long-standing bottlenecks adversely affecting performance.

Back in the 32-bit era, a 256MB limit was imposed on video memory. At the time, this wasn’t an issue as graphics cards tended to ship with only 1GB or less of video memory. Nowadays, it’s barely enough, as cards like AMD’s Radeon RX 6800 XT have a staggering 16GB of video memory.

Accessing 16GB in the conventional 256MB chunks in a sequential format hampers performance. It creates a queue so slow to process, some data is handed over to your system memory in a desperate attempt to alleviate the issue, slowing down the entire process even more.

So, why not get rid of the limit? Well, it’s been a long time coming but AMD has finally done it. With SAM, the CPUs allowed to access a GPUs entire video memory at once, resulting in tangible gains.

SAM isn’t technically a brand-new, exclusive feature. It actually falls under the PCIe standard, known as Resizable Bar. SAM is just AMD’s company-specific implementation to ensure support with their own hardware and drivers.

What do I need?

However, AMD is looking to further expand compatibility in the near future to accommodate their extensive product line-up. The end goal is to match the industry adoption rate of the incredibly successful FreeSync. Freesync’s cropped up in all sorts of monitors across the board, from LG’s UltraGear 144Hz gaming monitor to BenQ’s EL2870U 4K HDR monitor which we’ve covered on our blog.

In a similar fashion, AMD currently states a 500 Series motherboard as a requirement, though manufacturers are already releasing updates to support previous generation boards.

Make sure your motherboard is updated to the latest BIOS revision, based on AMD AGESA 1.1.0.0 or newer. Your AMD Radeon Software Driver should be at least version 20.11.2 or ideally newer.

The feature doesn’t cost anything. As long as you’ve updated, you’ll be good to go. AMD’s current rough estimate for performance uplift averages out at about 6%. It’s essentially ‘free’ performance in real world scenarios, so you might as well take advantage!

Being relatively new, game developers haven’t even updated their engines to fully utilise it yet, so the 6% figure is sure to increase further over time.

How do I enable it?

If you’re fully updated, it’s simply a case of enabling a couple of features in the BIOS. Gaining access to the BIOS varies from motherboard manufacturer to manufacturer, but liberally spamming either the Delete, F2 or F12 keys during system start-up usually works wonders. Otherwise, consult your manual.

Once you’re in, switch over to the advanced settings and enable both ‘Above 4G Decoding’ and ‘Re-Size BAR support’.

That’s really all there is to it. You don’t need to do anything else in software. Just reboot and enjoy SAM-enhanced gaming!

To put AMD’s Smart Access Memory to the test, we’re going to take a look at one of AlphaSync’s all-AMD gaming PCs. Let’s unbox the system, explore the specifications in more detail and then run some games! This isn’t the only AlphaSync system currently capable of Smart Access Memory. The AlphaSync Pure Base, with an AMD Ryzen 5600X processor and AMD Radeon 6700 XT, is good to go.

The AlphaSync system comes densely packed. Wedged in-between reassuring quantities of packaging materials, you’ll find the included AlphaSync accessories box, including all the associated bits and pieces like power supply cables and a handy quick-start guide. This covers any potential questions, from powering up the system for the first time to a dedicated FAQ section for first time PC gamers.

Now, onto the beastly gaming PC itself. Once you’ve removed the expanding foam, you’ll be immediately impressed by the internals. It’s certainly a looker, with cable management so meticulous it’s practically invisible.

Under the hood, this particular system’s outfitted with an Radeon RX 6800 XT, AMD’s second highest performing graphics card. When combined with the power of Smart Access Memory, even high resolutions like 4K will be no match for this system.

For the CPU side of this equation, we’ve got AMD’s Ryzen 7 5800X processor. With 8 cores and 16 threads boosting to a max of 4.7GHz, it’s perfectly powerful for high-end AAA gaming and even productivity-orientated tasks like video editing or streaming for a truly do-it-all system.

Backing up the CPU is 16GB of Corsair Vengeance RGB Pro 3600MHz RAM. This is a crucial component, as Ryzen processors demand speedy RAM. 3200MHz’s the sweet-spot, so anything above is an added bonus.

Speaking of RGB, the majority of components support it, even the all-in-one Corsair CPU water cooler and fans. Whether you’re a fan of full-on unicorn vomit aesthetical, or a more understated and deliberate touch, the RGB can be controlled by Corsair’s intuitive yet feature-rich iCue software.

Now we’ve got a SAM-enabled AlphaSync gaming PC, let’s load up some graphically impressive games to see how the system performs in a range of genres, from racing to RPG.

This system’s incredibly powerful, so we’ll be benchmarking it at a native 4K resolution. With Dirt 5, using the High Quality preset, the in-game benchmarking tool reports 115 – 120 frames per second.

Shadow of the Tomb Raider

Loading up Shadow Of The Tomb Raider next, we’ve dropped down to a 1080p resolution, but with high settings across the board.

This game’s also got a built-in benchmark, making testing performance characteristics even easier. They’re great for producing a reliable result as they repeat the same in-game scenario, so you can compare against your own gaming PC at home!

On our AlphaSync system, we’re hovering around the blisteringly fast 150 frames per second mark, blasting past the refresh rate of most gaming monitors.

Finally, Assassin’s Creed Valhalla. We’ve bumped the resolution back up to a native 4K to push this system to its limits. However, it doesn’t falter, breaching the all-important 60 frames per second barrier.

It’s consistently smooth, around 70 – 80 frames per second, with no awkward stutters ruining the presentation.

With those kinds of numbers, you could either drop down a couple of graphical options to push the frame rate even higher, or lock to 60 and turn up the graphics to the max.

AMD’s certainly in an advantageous position, producing both processors and graphics cards. They’re smartly leveraging their market-leading position to tightly tie their ecosystem together, making individual components work together in unison for even greater performance.

Check out the full range of AMD-powered, SAM-capable AlphaSync systems over at Ebuyer: AlphaSync gaming PCs powered by AMD