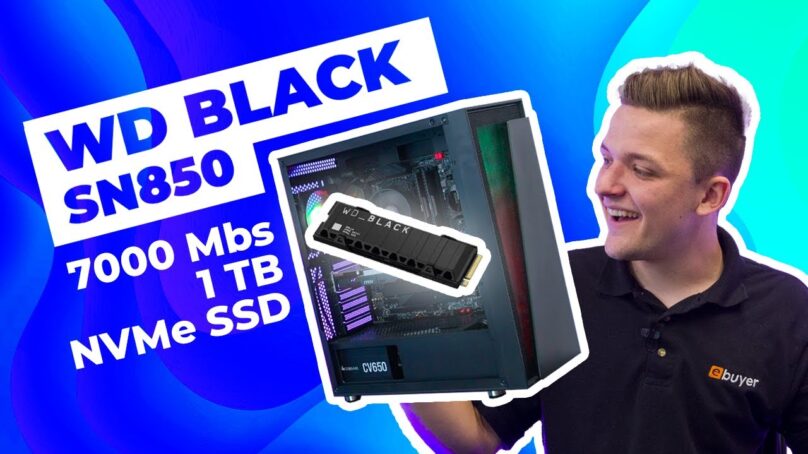 Here’s the WD_BLACK SN850, a blistering fast M.2 NVMe solid-state drive utilising next-gen PCIe 4.0 connectivity for read speeds up to 7 gigabytes-per-second. This version is a bit special with a built-in heatsink to keep it operating at maximum performance under intense tasks. Let’s unbox the drive and look at the form factor, hardware requirements and speed tests.

2.5-inch foom factor solid-state drives once ruled, but M.2 drives are becoming increasing prevalent in recent years because they’re so small. Many modern laptops have gladly transitioned to M.2, freeing up space for larger batteries and cooling solutions. Check out our unboxing of the Lenovo Legion 7 gaming laptop.

If compatible, both dimension and spec-wise, desktops PCs and laptops alike would benefit tremendously from upgrading to a WD_BLACK SN850 with heatsink. Especially with the impending release of Window 11 and the noteworthy implications of its DirectStorage API.

If the dimensions don’t line up exactly, WD offers up the SN850 without a heatsink. Of course, some motherboards go all-out with an elaborate arrangement of heat spreaders. An additional heatsink might not be entirely necessary, but better safe than sorry.

The WD_BLACK SN850 really pushes the performance envelop of PCIe 4.0, delivering up to 7,000MB/s reads and 5,300MB/s writes. With such an astonishing amount of data flowing through a miniature drive, the heatsink starts to make sense.

For PlayStation 5 gamers, don’t worry, the SN850 with heatsink is fully compatible with the console. Here’s a how-to guide on upgrading PlayStation 5 storage with a solid-state drive.

Popping it out of the packaging, the integrated heatsink comes pre-applied, with extra shielding wrapping all the way around the drive. WD hasn’t just slapped on a dull block of metal. The heatsink is passively cooled with perforated cut-outs, maximising the surface area for fresh air to channel through.

As the name heavily implies, the WD_BLACK SN850 features an all-black design, with no garishly coloured PCB making an unwanted presence to disrupt your system’s aesthetic. Built onto the heatsink is the slightest touch of RGB lighting, which is always a bonus. It’s customisable through the WD_BLACK dashboard application. Here, you can also analyse the condition of the drive and update to the latest firmware for maximum performance.

To capitalise on the outrageous speeds of this PCIe 4.0 drive, an equivalently configured PC is strongly recommended. For Red Team fans, an AMD Ryzen 5000 or 3000 series processor and an AMD X570 or B550 motherboard are fully compatible. On the opposing Blue Team, one of Intel’s latest 11th generation processors and an accompanying Z590 or B560 motherboard takes full advantage of PCIe 4.0.

It’s technically feasible to insert a PCIe 4.0 drive into a last-gen PCIe 3.0 slots, but you’d be leaving an excruciating amount of performance of the table. We’ve picked up an AMD Ryzen 5600X CPU and MSI B550 motherboard to run our favourite testing application – CrystalDiskMark.

Best method to test a SSD

There’s any number of ways to test a solid-state drive. We could’ve dragged a massive video file from one location to another and timed how long it took, or the boot-up sequence of the latest triple-A game, but that wouldn’t have cut it.

CrystalDiskMark is an industry-recognised benchmarking suite, universally agreed upon as the go-to method for properly testing a broad range of drives. All our other solid-state drive coverage here on the Ebuyer Gaming Hub and Ebuyer YouTube channel – get subscribed – utilises this key piece of software. It’s completely free too, so try it out for yourself! Compare your results against ours to clearly evaluate whether the WD_BLACK SN850 is a worthy upgrade.

Loading up CrystalDiskMark we’re using the default, fresh install settings covering off all the included read and write modes to thoroughly test the drive. However, we’re most interested in the headline results from the top row. This is a sequential speed test and most comparable to the back-of-the-box claims.

Before starting the test, make sure you’ve shut down any intrusive programs and background processes which might interfere with producing accurate results. If more than one drive is installed, double-check the correct drive is selected in the top-right, then hit the start button.

After a bit of waiting, the results are in! We’re sitting slightly under the insane 7 gigabytes-per-second mark at 6,924MB/s on our all-important read speed – over twelve times the speed of a bog-standard SATA solid-state drive. A fast read speed is transformative for a system’s boot up times and for significantly shortening loading screens.

This is essentially like-for-like with the advertised speeds, after accounting for set-up discrepancies, software overhead and margin of error. Even our results from the second, more intensive test comes in at over 4 gigabytes-per-second for impressive consistency in trickier tasks.

To provide some context for the bang on 5,300MB/s write speed, this would allow you to write a 100GB video file in under 20 second. With the right data, you could theoretically fill up the entirety of the drive in just 3 minutes.

Hopefully these mind-blowing results illustrate why you should seriously consider the WD_BLACK SN850 with heatsink. To regulate temperatures and in turn prolong the life span of the drive for years’ worth of reliable, heavy-duty use. Check it Western Digital’s full range of super-fast SN850 SSDs – with or without a heatsink – over at Ebuyer.