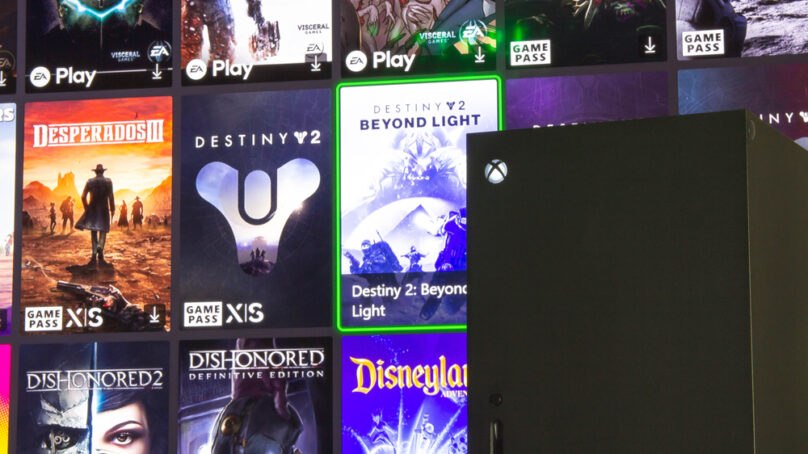 Have you subscribed to Xbox Game Pass, but become overwhelmed by the enormous library of games up for grabs? Right now, there are well over 400 high quality games on the service, so we don’t blame you! Let us suggest our favourite games that we’ve played this month on Xbox Game Pass to help get you started.

Developed by Arkane Studios (which falls under the now Microsoft-owned Bethesda) Prey is undoubtably one of the most overlooked and underappreciated AAA games of the last generation. You might’ve heard of Arkane from their Dishonored series – also on Xbox Game Pass – and last year’s game-of-the-year winning DEATHLOOP.

Arkane are highly adept at making games of the ‘immersive sim’ genre. They’re the last ones doing so at a sizable budget, really. What exactly constitutes an immersive sim is tenuous but, broadly, games of the genre emphasise player agency in believable system-driven environments. As opposed to other games with heavily choreographed actions and scripted set-pieces. Think System Shock or Deus Ex. In a lot of ways, Prey is a worthy spiritual successor to these all-time greats.

Prey takes place in an alternative future where U.S. president John F. Kennedy survives his assassination and accelerates funding of the 1960’s space race. So much so, alien lifeforms begin to take notice. You play as Morgan Yu on board Talos I, a space station in orbit around the moon. You’re part of a research team experimenting on shape-shifting aliens known as the Typhon, testing their advanced psychic powers on humans. However, the Typhon turn hostile, break out of the labs and take over Talos I. You must explore the infested space station to discover your character’s cryptic past and find out how escape the alien menace. Along the way, you’ll find neuron mods derived from the Typhon to augment your powers.

Prey’s crowning achievement is the highly credible sense of place it creates and how you interact with it. Talos 1 is a self-contained space station that’s been expanded over time by various space agencies. It represents the height of humanity’s space endeavour and you’re free to roam it in a non-linear fashion. From luxurious art-deco lobbies to the retired retro-future quarters and the behind-the-scenes maintenance rooms, it’s grand and feels suitably lived-in.

Most of the game isn’t explained away in overt cut-scenes – it’s up to you to observe and engage with the game’s environmental story-telling. Found a locked door? The combination might be scribbled down on a whiteboard, or in an e-mail on a co-worker’s computer. Maybe you can hack the door’s circuitry, use your Typhon powers to transform into a pen and roll under it or shoot the disengage lock with a random toy crossbow you found hours ago. In Prey, there’s always more than one way to approach an objective in a systematic and emergent way.

As it’s on Xbox Game Pass, we implore you to give it a shot and find your own way out of Talos I. We wouldn’t want to spoil the secrets and shortcuts you’ll find all throughout this densely-packed game.

Honestly, for as popular and long running as the franchise is, we’ve never given the Battlefield games an honest shot until they came to Xbox Game Pass via EA Play. Whether it’s open beta, free weekends or friends badgering to squad up with them, we’ve played nearly all the Battlefield games one way or another, but always bounced off them far too early.

Used to more fast-paced, arena-style shooters, the largely open-ended design of Battlefield’s maps failed to pique interest. You’d get chucked into the meat grinder too often, either by a cross-map sniper as you run across an empty field or the game’s chaotic respawn system. If we were to recommend a first-person multi-player shooter that’s more suited to our tastes, the zip-lining and crouch-hopping Titanfall 2 immediately springs to mind – also on Xbox Game Pass.

However, after last year’s not-so-hot debut of Battlefield 2024 and the resulting exodus of players flocking to older entries in the franchise, Battlefield 1 kept coming up in conversation time and time again, cited as the best of the bunch. As it was right there on Xbox Game Pass with all the expansions bundled in and with a now revitalised playerbase, we thought we’d give it another shot. Turns out, it’s a fantastic shooter that’s still worthy of your time, even if it isn’t the most recently released one.

What left us so awe-stuck about Battlefield 1’s multi-player is the lengths they’ve gone to make it a savagely immersive and cinematic experience. Compared to other big-budget multi-player games like Call of Duty, with score-obsessed gamers screaming down the microphone about their kill-death-assist ratio, Battlefield 1 feels at times like a scripted single-player game.

A sense of unwieldiness

As Battlefield 1 takes place in World War I, the weapons look and feel appropriately old, a departure from the laser hit scan aim in most games. They’ve cranked up the random spread when firing a gun, which might not be the most accurate representation of history, but it lends combat a sense of unwieldiness and apprehension, as if the soldiers are truly fighting for their lives.

This is only escalated by the superb sound design. From the panicked breaths as you’re suppressed in the trenches, to the lung-busting screams of a bayonet charge. What’s more, there’s even an option to make soldiers speak in their native language. If you’re defending a besieged French city, you’ll hear the soldier’s orders in French. It gives you no tactical advantage whatsoever, but it heightens immersion so much – an interesting option in a competitive game.

It’s Battlefield 1’s level of detail that recontextualises the whole experience. I wasn’t loitering around for a fun vehicle to spawn, I was in the thick of an intense war. No longer was the meat grinder an annoyance, it reflected the brutal and unrelenting conflict. Grab a good pair of headphones and load up Battlefield 1 for one of the best multi-player games on Xbox Game Pass.

The modern gaming landscape is dominated by hideously expensive-to-produce AAA games. Lavish production values show how far games have come, but it often overshadows the gameplay department. Wind back the clock to the 90’s with Streets of Rage 4, a loving revival of the iconic beat ‘em up series.

How to continue a series

Unlike many modern reboots of long dormant franchises, Streets of Rage 4 doesn’t tear out what made the originals so good in favour of any new trends. It feels like a near-perfect continuation of a series that hadn’t seen a new entry for over 25 years, while also introducing new gameplay mechanics, a hand-drawn art style and a fresh soundtrack.

Music is an integral part of the Streets of Rage experience, with infectious EDM pushing you into the zone and thumping beats punctuating every bare-knuckle punch, kick and throw. The original trilogy was scored by the legendary Yuzo Koshiro and Motohiro, and they’ve reprised their roles for Streets of Rage 4 alongside an all-star list of guest appearances.

Streets of Rage 4 is one of those games you’ll want permanently downloaded on your PC. When it feels as if there’s nothing else left to play, or you can’t be bothered to chip away at a 100-hour RPG, Streets of Rage 4 is such a great pick-up-and-play experience. It’s an arcade-style game, so you can fight through the 12 unique stages in less than an hour.

That’s not to say Streets of Rage 4 is devoid of content, far from it. Whether you crank up to the game’s unrelenting Mania+ mode or self-imposed a no-hit run and one-credit clear, the game rewards you handsomely for it with a plethora of unlockables.

From brand-new fighters, each with their own distinct play-style changing up the way you play, to fan-favourite characters from the past and retro soundtracks. Streets of Rage 4 keeps you coming back to string the perfect combo and best your high score.

That’s our selection of top picks for games we’ve played on Xbox Game Pass during February. The Xbox Game Pass catalogue is colossal and ever-expanding so no doubt we’ll have more recommendations to share in the near future! Keep an eye on the Ebuyer Gaming Hub for upcoming blogs!

Top 10 Tips on Building a PC