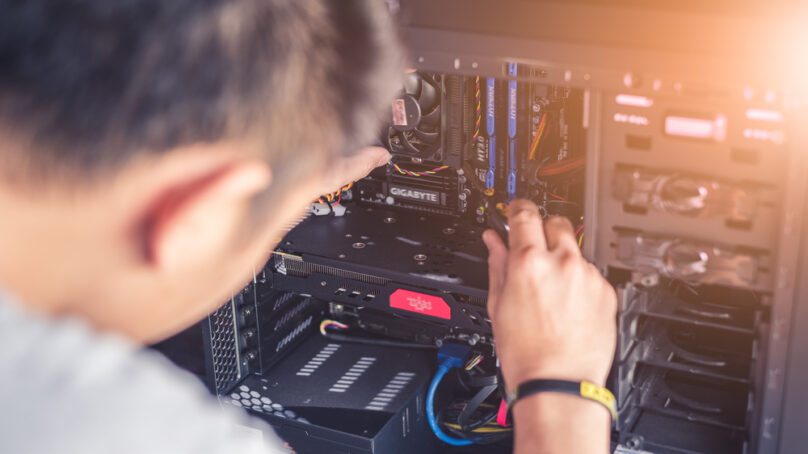 Top 10 Tips on Building a PC

Have all your PC part orders arrived from Ebuyer? No doubt you’re raring to go, but hold on. From jump-starting a motherboard to applying thermal paste, read these top-10 tips on building a PC first for a smooth and pain-free experience.

When the time comes to build a PC, you’ll want to clear out a large, insulated surface that’s easy to build on. In a home environment, a wooden dining table or desk would be prime examples.

They’re around waist height, so you can lower PC parts into the computer case and plug in front-panel connectors without having to hunch over uncomfortably, or needing to tip the case at a perilous angle. You can lay out the case at one end of the desk and the PC parts at the other, with your active building area in-between.

Plus, wood is a great insulator (as opposed to conductor) of electricity, reducing the risk of zapping PC parts.

Conversely, try to avoid building on a carpeted floor. Rubbing against carpet is going to generate static electricity – which, if you don’t take precautions, can discharge into PC parts and damage them.

As long as you don’t go out of your way to wear fuzzy socks and brush back and forth on carpet, however, static isn’t as big of a risk as it’s made out to be. Modern PC parts are designed to be protected from electrostatic discharge – they can withstand a fair amount before any real damage is dealt.

Regardless, losing an expensive graphics card to static is a daunting prospect. There are a couple of common techniques to ground yourself and safely discharge any built-up static.

Plugging in a switched-off PSU to the wall grounds it. Touch it, and any static is discharged, equalising your body’s voltage. Whenever you’re about to handle a PC part, simply touch the grounded PSU for safety.

Taking this a step further, wearing an ESD anti-static strap is the easiest and most foolproof way to mitigate static. Connect one end to the ground and wrap the other around your wrist – or ankle as it’s out of your hand’s way – to ensure you always discharge. If you’re a first time PC builder, no doubt you’re nervous about damaging PC parts. We’d recommend wearing an ESD strap for peace of mind.

You’ll want to keep your active building area neatly organised. As there are so many PC parts, it can quickly devolve into a rubbish pile of empty boxes, plastic baggies and pamphlets. Beneath all the rubbish might be the one screw you’ve been looking for, with the search for it slowing you down.

You’d be surprised how fast you can build a PC when everything’s laid out ready at arm’s length, neatly and with no rubbish in the way. Once you’ve unboxed a PC part, set aside the packaging and only keep its contents near you. You could unbox everything ahead of time and spread it out over your building area, but that’ll only limit space.

We’d recommend building a PC one part at a time. There’s no need to have your computer case’s screws strewn about when you’re dropping in the CPU, for instance. This has a number of advantages, such as ensuring you won’t misuse a wrong screw and strip a thread.

Notice how we said set aside the packaging, not throw it away. As frivolous as it sounds, we’d recommend storing away boxes for PC parts, or at least for the big-ticket items like CPU, GPU and motherboard.

We hope you won’t run into hardware-related issues building a PC, but if you do, having the original packaging makes returns easier and safer. From a motherboard’s socket cover to anti-static bags and foams inserts, they help protect a PC part.

Some manufacturers won’t accept a return unless it’s adequately packed back in the original packaging, with the original protection. Otherwise, it could be damaged in transit through no fault of your own.

Plus, when it’s time to upgrade your PC, you can give away your old hardware safely or re-sell it at a higher price with the original packaging. Chuck all the loose items in the part’s box and store it away, you’ll never know when they’ll come in handy.

When building a PC, we’d recommend bringing a smartphone, tablet or laptop and loading it up with YouTube. Having a physical manual on hand is helpful, but they’re often not detailed enough, relying on snippets of text and generic infographics.

A video that walks you through building a PC is such an invaluable resource. If you’re ever stuck, you can scrub through a video that’s tailored for your PC part frame-by-frame to see where every cable and screw goes. Ebuyer’s own YouTube channel has plenty of build guides, so get subscribed.

Don’t toss out the manuals, however, as they contain crucial information for configuring dual-channel RAM and plugging in your case’s front panel connectors.

Don’t worry so much about thermal paste

One of the most contentious PC building topics is how much thermal paste you should use, and what’s the best method of applying it. We’ve gone into detail about thermal paste in our PC Cooling – What You Need To Know blog.

In all honestly, however, you shouldn’t fret too much over thermal paste. On online forums and image boards, people can be too stringent about applying an exact ‘pea-sized’ amount, and no more. This builds up thermal pasting as some monumental task and can make a first-time PC builder needlessly nervous. In reality, there’s some leeway.

Aim for a pea-sized amount, yes – but if a bit more squishes out of the tube than you were anticipating, that’s not a problem. We’d recommend erring on the side of slightly more thermal paste than less anyway, to completely cover the CPU’s integrated heat spreader.

It’s hard to control how much thermal paste you’re applying. Sometimes it’s dried-up and takes forever to come out, or it’s extremely viscous and comes pouring out. As long as you haven’t dumped a huge blob on the CPU, don’t be overly fussy with the thermal paste. It’s a weird, messy compound; cleaning it up for the ‘perfect’ amount is more hassle than it’s worth.

Building a PC is often likened to even more expensive Lego. As with the plastic bricks, many PC parts snap into place, often accompanies by an audible click. They may require a bit of pressure to ensure they’re seated properly, but you should never feel the need to force things.

PC parts are designed to go in one way. If there’s any resistance, like something’s blocking the way, don’t proceed. Ramming a part in won’t get you anywhere and only serves to damage it. Lift it out, check the part’s manual if needs be and start again. From scratching a RAM DIMM’s gold contact to snapping off the pins of a CPU, PC parts are quite delicate and can be rendered inoperable if you’re not careful.

Fortunately, there are also a few handy guidelines built right onto PC parts to help you. For instance, on one corner of a CPU, you’ll notice a small triangle. This corresponds with another triangle on a motherboard’s CPU socket. Line up both triangles, and you’ll have the correct orientation needed to install the CPU.

Do a test boot

Building a PC is quite an involved process. There are many parts which need to be installed one after another, with steps in-between like applying the thermal paste and screwing in the case’s stands-offs. Factor in the time spent poring over the manual and double-checking everything’s correct if you’re a first-time PC builder, and the hours can quickly add up.

For a PC builder, there’s no worse feeling than labouring over a build for hours, only for it not to turn on. As it’s hard to diagnose what exactly went wrong – did electrostatic discharge zap something, did an over-tightened screw short out a part or was a PC part simply faulty from the factory? There could be any number of reasons why the PC isn’t turning on.

Rather than waiting right until the end of a PC build to test it, we’d recommend performing a mid-build test outside of the case. You can quickly get a PC up-and-running using only the bare-essential PC parts.

What do you need for a test boot?

Place the motherboard on a non-conductive surface – the motherboard’s box is common choice – and install the CPU, CPU cooler, RAM and GPU. Plug in power cables as required and hook up this open-air test bench to a monitor for video output. At this point, we’re not worried about cable management or an operating system. We’re simply seeing if the PC turns on and can reach the BIOS to confirm everything’s working as intended, before it’s all screwed down.

Even the most seasoned of PC builder forgets this tip from time to time. Before lowering the motherboard down into place, make sure you haven’t forgotten the I/O shield. Mounted at the rear of a computer case, the I/O shield prevents dust from entering and secures a motherboard’s input/output in place, so they’re not flexed and jostled about as you hook up your peripherals and accessories.

Importantly, the I/O shields needs to be in place before the motherboard – it can’t go in after the fact. This will have caused many frustrations when building PCs, no doubt. You could be wrapping up a build, with every part screwed down and cable managed, only to have to undo all your hard work when you’ve noticed the I/O shield is missing.

Some high-end motherboards, like the MSI B550 Unify-X we’ve covered here, have the I/O pre-attached. Otherwise it’ll be in your motherboard’s box and, with a bit of fiddling, snaps into the case.

Celebrations are in order once you’ve past your first successful boot of a complete PC build, but you’re not done yet. As soon as everything’s hooked up and confirmed working, it’s tempting to hastily bunch up all the loose cables, slap on the case’s side panel and call it a day. After all, there’s still the long-winded Windows and driver installs ahead of you before you can download games to test out your new hardware. However, as tedious and uneventful as it seems, we’d recommend taking the extra time to properly manage your cables.

You’ll not only be reminded of how ugly unmanaged cables are if you have a tempered glass side panel, but they’ll also make future upgrades harder and can impede airflow. Lay out your cables using your case’s cable management routes and zip tie loops down. Your future self will thank you for it. As when it comes time to upgrade or replace a PC part, you won’t have to spend ages untangling a web of cables and deducing what each one does again. If they’re managed, you can easily see what cable goes where, unplug it and slot in the new PC part.

Build a PC at Ebuyer

That’s our top 10 tips on building a PC! As mentioned, check out Ebuyer’s YouTube channel for build guides – you’ll find more insightful PC building information there. Looking to build a PC, but can’t decide on the specs? Check out our blog Gaming PCs in 2022 – The specs you should be looking for.