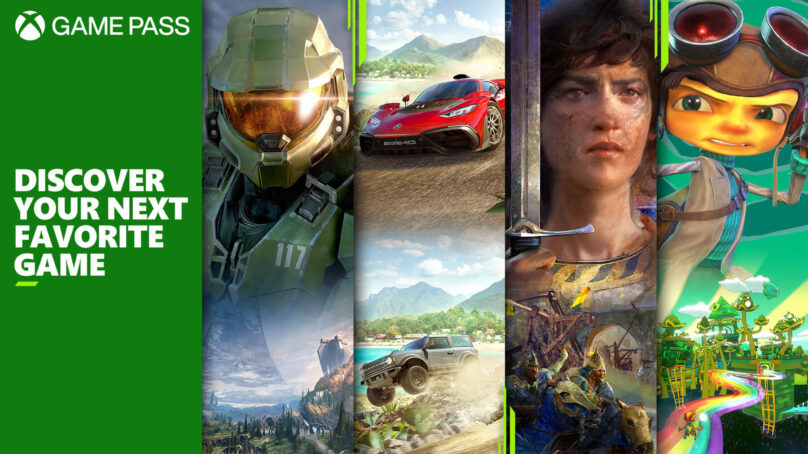 How much does Xbox Game Pass cost?

It’s worth nothing first-time Xbox Game Pass subscribers can get their first month for only £1. A great introductory offer to discover all that’s available on the service. Blast through Master Chief’s latest adventure in Halo Infinite for an entire month, for just £1!

Xbox itself doesn’t offer a discount for buying in bulk – one months’ worth of Xbox Game Pass costs the same whether you’re paying for 6 months upfront or month-by-month. So, make sure to check out Ebuyer for savings on Xbox Game Pass download codes to sweeten the deal even more.

The bulk of Xbox Game Pass’s value comes from the extensive selection of games. Apart from console and PC exclusives, which Xbox clearly labels in its ‘coming soon’ infographics, it’s most a shared library across every tier of Xbox Game Pass. As of early February, there’s over 400 games on the service – 401 PC games and 442 console games. The discrepancy is largely attributed to backward-compatible console games.

If you forgot to renew your subscription, or you just want to take a break from the service, don’t worry about your game saves. Xbox isn’t so strict as to wipe your progress when it lapses. Across every tier of Xbox Game Pass your game data is tied to your Xbox profile and backed up to Xbox’s cloud servers. Return to the service at any time and you’ll be able to pick up exactly where you left off.

Cloud saves work strongly in conjunction with Xbox Game Pass Ultimate and its unrestricted access to PC and console games. When browsing Xbox Game Pass’s broad library of games, you’ll notice many of them take advantage of Xbox’s ‘Play Anywhere’ initiative. In supported games your saves, achievements, add-ons and more are cross-compatible on both versions of the game.

Play though Forza Horizon 5’s single-player focused missions at glorious, maxed-out graphics on your gaming PC, then hop over to your Xbox Series X/S to go head-to-head with your mates in multi-player races, without losing any progress. This is only one example and, much like Xbox Game Pass itself, the list of Play Anywhere supported games is ever-growing – over 200 games!

Plus, it gives you 10% off related game DLC. A game on Xbox Game might only be the ‘vanilla’ version. Use the member discount to buy add-ons, expansion packs and more. It also applies to micro-transactions. So, if you’re saving up Halo Infinite credits for the latest armour coating or to unlock the premium battle-pass, you’ll get a slight discount.

EA’s own subscription service, EA Play, is included with PC Game Pass and Xbox Game Pass Ultimate at no extra cost – a subscription inside a subscription! As one of the major and most prolific game publishers outside of ‘the big three’ console manufacturers, EA Play grants you access to an extensive back catalogue, bulking out a package already bursting at the seams with games.

EA Play has its own benefits too, including a 10% discount on EA digital content purchases, exclusive in-game rewards and, most excitingly, game trials of EA’s latest games. Right now, that’s FIFA 22, Madden NFL 22 and Battlefield 2042 you can play for up to 10 hours, commitment-free, with saves carried over to the full game.

A subscription to Xbox Game Pass Ultimate gives you free perks, both gaming and non-gaming, on top of your member discount. Alongside a monthly update of games joining the service’s roster, Xbox is frequently adding new perks too. Like the games, the perks come-and-go, so don’t forget to redeem them while they’re up!

In the past, we’ve seen armour coatings, experienced point boosts and more in Halo Infinite. Interestingly, Xbox has also hashed out deals with non-gaming partners to round out the multi-media experience of Xbox. Including timed trials to other subscription services like YouTube Premium, Crunchyroll Premium, Spotify Premium, Discord Nitro and Disney+.

Thin and light laptops, mobile phones and tablets – Xbox Cloud Gaming can conceivably turn your non-gaming devices into Xbox Game Pass machines. If playing your Xbox games anywhere that’s got a fast internet connection is an interesting concept, consider upgrading to Ultimate. Xbox Cloud Gaming is classified as a work-in-progress, so for now, you can only access it as part of Xbox Game Pass Ultimate.

Which Xbox Game Pass should you buy?

For gamers who play exclusively on PC, we think it’s a clear-cut choice. Unless you’re seriously interested in trying out Xbox Cloud Game for on-the-go gaming, PC Game Pass is too much good value to pass up. Since you don’t need to pay to play multi-player on PC, the Xbox Live Gold portion of Xbox Game Pass Ultimate doesn’t hold much value. Unlike Xbox Game Pass for Console, which is equivalently priced, you’re receiving EA Play as part of PC Game Pass too. A monthly subscription to PC Game Pass gets you an unbeatable amount of gaming for your money.

The choice isn’t so obvious for console gamers, or those who regularly switch between console and PC platforms. Xbox Game Pass for Consoles is great if you intend on only playing single-player and free-to-play games on your Xbox console. Even then, it’s worth considering Xbox Game Pass Ultimate as it includes EA Play, which includes the game-of-the-year winning It Takes Two, almost the entirety of the Battlefield franchise and much more. If you’re looking to game online, it’s really worth upgrading to Xbox Game Pass Ultimate, plus the extra benefits it brings.

Want to give Xbox Game Pass a shot? You can buy discounted download codes for all tiers of Xbox Game Pass (in one, three or six-month increments) over at Ebuyer.