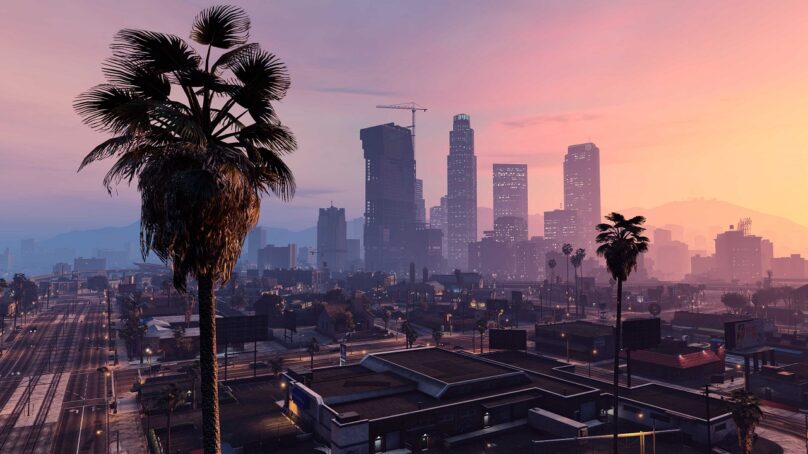 As of late, we’ve been inundated with news of multi-billion dollar buy-outs from the industry’s biggest players. Microsoft forked over an industry-changing sum for Activision-Blizzard, while Sony snapped up Bungie shortly after. In comparison, it’s been a moderately calm week for gaming news, but we’ve got the two top stories to share.

Rockstar Games published a blog post which shed some much-needed light on the soon-to-be released next-gen version of Grand Theft Auto 5 for Xbox Series S|X and PlayStation 5 consoles. To quash the usual deluge of “GTA6 when?” spam in blog’s comment section, the tail-end of the blog contained Rockstar’s first public acknowledgement of Grand Theft Auto 6. Or the ‘next entry in the Grand Theft Auto series’, at least.

“With the unprecedented longevity of GTAV, we know many of you have been asking us about a new entry in the Grand Theft Auto series. With every new project we embark on, our goal is always to significantly move beyond what we have previously delivered — and we are pleased to confirm that active development for the next entry in the Grand Theft Auto series is well underway.”

How long will we have to wait?

Anyone could’ve predicted Grand Theft Auto 6 was on the cards, it’s a foregone conclusion. Grand Theft Auto 5 is the 2nd best-selling game of all time, only bested by Minecraft. The original Xbox 360/PlayStation 3 release of Grand Theft Auto 5 was way back in 2013. By now, a sequel is well overdue. Fans have been clamouring for it and this tidbit of news should tide them over and curb wild rumours.

If Rockstar is now open to talking about the existence of Grand Theft Auto 6, we’re hoping this means a trailer is soon approaching. Rockstar hasn’t shared any visual evidence alongside the brief quote, so it looks like we’ll be waiting a while longer yet. Based on Rockstar’s previous game reveals, there’s no doubt Grand Theft Auto 6 skips this year. A 2023, 2024 or even 2025 launch window is more likely – over 10 years between releases!

This news continues 2022’s new trend of unceremoniously announcing games in blog posts. Blizzard, Crytek and EA all pulled the same tactic with their recent announcements. It’s a stark departure from flashy CGI teasers, cryptic alternate reality games and months of teases on social media. Do you prefer these no-nonsense announcements?

Leading up to the Steam Deck’s launch later this month, the first in a series of product embargoes surrounding the portable gaming PC have lifted. The lucky few who’ve had access to near-final production units can now share their hands-on impressions. They’re only allowed to talk about the hardware, as Valve’s working on the software side of things right up until launch. However, it sounds as if the Steam Deck is “the most innovative gaming PC in 20 years”, according to LinusTechTips.

We recommend checking out each reviewer’s coverage; GamersNexus delved deep into the Steam Deck’s thermal performance, and The Phawx helped demonstrated how much juice you can squish out of the portable device by fine-tuning ‘TDP’ values, as explained in our Best High-End Gaming Laptops of 2022 blog. While you’re at it, subscribe to Ebuyer’s YouTube channel too.

PS4 performance in a portable form-factor

What we’ve taken away most from the coverage is how performant the Steam Deck can be, under the right conditions. It uses a tailor-made AMD APU – powered by ZEN 2 CPU cores and RDNA 2 GPU cores – that’s blowing away any other iGPU on the market. It’s roughly comparable to a base-model PlayStation 4. In 2022, this might seem underwhelming, but the Steam deck rocks a 1280×800 resolution. It’s more than adequate on shrunk-down display and lets the Steam Deck punch way above its weight.

Valve provided seven games for test, including hardware demanding ones like Control and Forza Horizon 5, and the Steam Deck kept up admirable performance in each one. If the PlayStation 4 can run modern triple-A games at 1080p and 30 frames-per-second, it means the Steam Deck can run them even faster at a lower resolution. Devil May Cry ran in excess of 60 frames-per-second on the Deck, a mind-blowing result for a portable gaming PC.

Besides strict performance metrics, the rest of the device sounds fantastic too. On most portable devices, audio is treated as an afterthought. However, Valve’s translated their speaker technology from their Index virtual reality headset to the Deck with impressive results. Most interestingly is how fast the Steam Deck can load games off an external SD card. Valve must’ve made some under-the-hood optimisations, as there wasn’t as large of a discrepancy in loading time as we would’ve expected between the integrated NVMe SSD and external SD card.

Besides strict performance metrics, the rest of the device sounds fantastic too. On most portable devices, audio to treated as an afterthought. However, Valve’s translated their speaker technology from their Index virtual reality headset to the Deck with impressive results. Most interestingly, however, is how fast the Steam Deck can load games off an external SD card. Valve must’ve made some under-the-hood tweaks, as there wasn’t a huge discrepancy in loading times between the Deck’s internal drive and an external SD card. Looks like SD card will be the go-to for upgrading the Deck’s storage – a sigh of relief for those who bought the 64GB model.

What remains to be seen is how well the software holds up. As explained in our blog, the Steam Deck runs Linux, an unconventional operating system for PC gaming. Not a whole lot of games run natively under Linux. Valve’s relying on an experimental translation layer called Proton to convert non-native games designed for Windows to run on Linux. It’s struggle with DRM and anti-cheat measures in the past. There’s a chance your favourite game won’t work on the Deck, here’s hoping these kinks are ironed out ahead of the February 25th launch. Keep an eye out on the Ebuyer Gaming Hub for future updates!