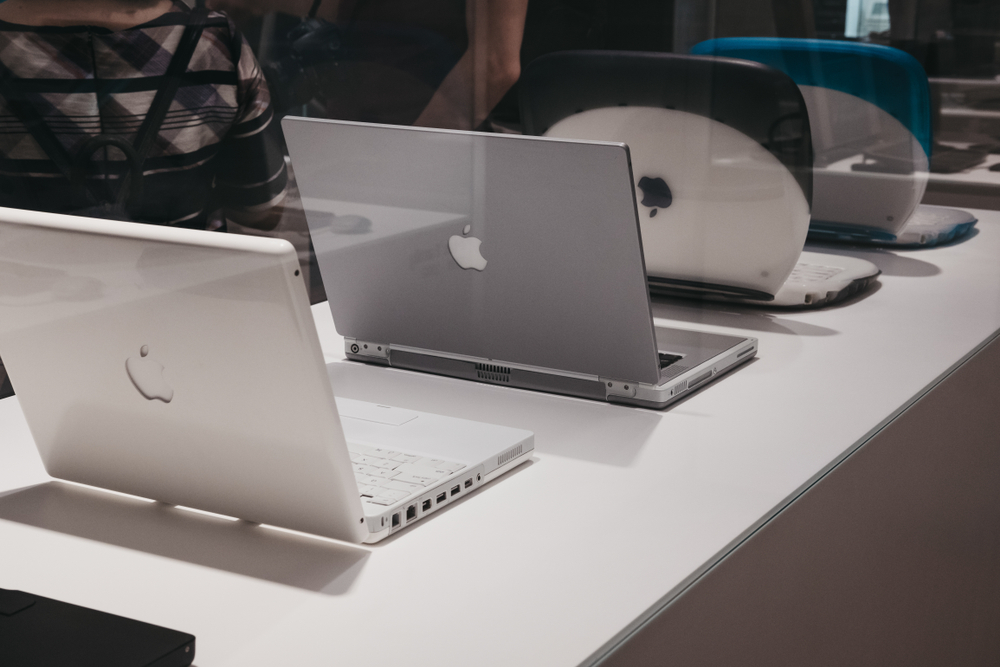 Apple laptop computers are undeniably style icons. There is something remarkable about the lines of a MacBook – as there was about the early versions of Apple’s trailblazing laptops. Those early designs set the standard for all other manufacturers to try and emulate.

Of course, Apple is known for genius designs, the iPod and creating user-friendly smart phones with game changing features. Over the last few decades, Apple has made revolutionary strides in the tech industry, creating products that everyone wants to own. Apple was named as a company in 1976 and was founded by Steve Jobs and Steve Wozniak in Cupertino in California. It was at this time when the first apple computer, the Apple I, was released. Computing was in its infancy back then and were not a part of many people’s lives. In fact, at the time, computers were only used in labs and in very specific professions.

As technological advances occurred over the years, Apple released several more PC-style computers, such as the Apple III and the Mackintosh 128K. In 1997 Apple formed a partnership with rival Microsoft, which broadened the company’s reach towards mainstream consumers.

Laptops have become one of today’s most purchased tech items. Having a great performing computer, whilst being totally portable, is a great way for people to take their work with them wherever they go. Apple created their first laptops in 1991 and since then has developed outstanding computers which have becoming cult classics with those who work in the creative and media industries.

We’re going to look at the history of Apple laptop computers, which products changed the way laptops were designed, what made them great and why they have become such a must-have gadget in our modern world.

In 1991, Apple released the first three PowerBooks: the high-end PowerBook 100, the more powerful PowerBook 140, and the high- end PowerBook 170, the only one with an active matrix display.

These laptops caused a stir in the tech industry due to their compact dark grey cases, built-in trackball, and the innovative positioning of the keyboard which left room for palm-rests. These were features that hadn’t been seen in previous laptops. The user-friendly layout of these PowerBooks helped to set out the future for Apple laptop computers. Basically, the PowerBook’s series became the standard layout all future notebook PCs would eventually follow.

These PowerBooks from Apple were met with positive reviews, the first series taking 40% of all laptop sales upon release. Despite their popularity, Apple laptops struggled with overheating problems.

Several different models were released within the PowerBooks series in 1992, such as the 145, 160 and 180 models, all of which had more improved features. For example, the 160 and 180 had video output allowing them to drive an external monitor. The PowerBook Duo was introduced in 1992. It was a hybrid portable/desktop computer, continuing to streamline the notebook features first introduced with the PowerBook 100. The Duos were a series of very thin and lightweight laptops. They featured a docking station to provide the system with extra video memory, storage space and could be connected to a monitor.

This year saw the introduction to the PowerBook 500 series. It showcased a trackpad, instead of a trackball used in previous models. It also integrated a built- in microphone, and depending on the model you chose, it would either have a black and white or colour display. This series also added ethernet capabilities and stereo speakers. Some of these features were a first in the industry and took the market by storm, forever changing how laptops were designed and what features were to become standard in all laptops and notebooks at the time.

A few years after the successes of the PowerBook series, Apple created the PowerBook G3 range. This is when you can really see the familiar features that have become must-haves in modern laptops you can buy today. At the time of its release, the PowerBook G3 was advertised as the “fastest notebook computer available”. It featured the PowerPC G3 chip, which was comparably two times faster than Pentium II processors that were used in other desktops and laptops at the time. This series also included a built in CD-ROM drive and a swappable expansion board for multiple storage options.

There were several other models in the PowerBook G3 range that were released a few years later, such as the Wall Street, Lombard and Bronze Keyboard series. These new models all featured better battery life, bigger screen sizes and the introduction of USB ports.

The end of the last century saw a design overhaul from Apple with the introduction of iBook G3. Comically nicknamed the “Clamshell”, this quirky looking laptop appealed to the mass consumer market. Unlike its previous PowerBook cousins, this laptop looked less like a corporate gadget, and more aesthetically pleasing to the eye. This laptop was inspired by the popular design of the iMac at the time.

The iBook G3 had a polycarbonate shell, that came in a variety of bright colours, a resolution active-matrix display, CD-ROM drive and built-in wireless networking. It even had a useful carry handle in order to fit the marketing slogan at the time “iMac to go”. The trackpad also supported tap, double tap and dragging capabilities, a feature that hadn’t really been seen in notebooks or laptops at the time.

Just like all Macs of this era, it used the PowerPC CPU, but in this one, it used the G3, as Apple wouldn’t switch to Intel until 2006. This particular range of Apple laptops became a cult-classic and are used in many of the early to mid-2000’s hit films, such as Legally Blonde. The “Clamshell” became a hit with students and home consumers. Apple sold 700,000 of them in the 19 months of being released, because of this, these laptops were firmly placed on the map.

The return of the PowerBook occurred in the early 2000’s with the release of the PowerBook Titanium G4. This series came in two different designs. One was enclosed in a titanium body with a translucent black keyboard and a 15-inch screen and the other featured an aluminium body with an aluminium-coloured keyboard. They came in 12-inch,15-inch, and 17-inch sizes. Unlike other laptops and notebooks at the time, the PowerBook suddenly became sleek and elegant. It was also one of the very first widescreen laptops available to consumers.

The use of aluminium in the body of this laptop was popular for its durability and stylish look, so much so that this style is still used in Apple laptops to this day. The Aluminium PowerBook G4 also introduced a backlit full- sized keyboard, a unique feature that has been used in most of Apple’s laptops ever since.

Steve Jobs unveiled the MacBook and MacBook Pro in 2006. Apple had made the decision to move towards using Intel CPUs in its computers. This change meant the discontinuation of the iBook and PowerBook ranges, which were replaced by these new MacBook and MacBook Pro series. The first MacBook was considered extremely similar in design to the “Aluminium PowerBook G4”, but just had an Intel CPU inside.

The MacBook series was the first in Apple’s history to include an inbuilt iSight camera (webcam), before this addition, users would have to use an external webcam. This range also introduced the “MagSafe” easy disconnect power cord. This was to help prevent the laptop from being dragged off a surface if you accidentally pulled on the cable. Again, this feature can be seen in modern Apple laptops. In 2007, it added LED-backlit screens to improve the battery life. Apple also stopped using ATI’s graphics cards and changed to Nvidia’s 8600M GT for a much faster and responsive experience.

The new MacBook Pro was released during this year. Steve Jobs announced a significantly altered MacBook Pro featuring a precision “unibody enclosure” carved from a single block of aluminium and a multi-touch glass trackpad. Apple had discarded the centre button on the trackpad used on previous models, and replaced it with a streamlined, larger trackpad. This allowed users to click on the pad and it supported up to four-finger gestures.

The new range of Apple laptop computers also included a large edge-to-edge screen, creating a super stylish look. The series had faster memory, larger hard drives that included solid state hard drive options and Nvidia mobile graphics cards. There were different models within the series, one was a low-power option for general consumers, the other model a higher-end alternative for more intensive 3D or design work for professional users.

The MacBook Air was also introduced in January 2008 with a 13.3-inch screen and was promoted as the “world’s thinnest notebook.” It featured a custom Intel Merom CPU and Intel GMA GPU, an anti-glare LED backlit display, a full-size keyboard, and a large trackpad that responded to multi-touch gestures. The MacBook Air received positive reviews for its full-sized keyboard, lightness, and thinness, whereas the limited configuration options and ports, slow speed in non-SSD models, non-user-replaceable battery issues were criticised.

Even though the first MacBook Air received mixed reviews, it definitely set the bar for a new generation of thinner and lighter laptops that could still perform to high standards.

In 2011, Steve Jobs resigned his position as CEO of Apple before his long battle with pancreatic cancer took his life in the October of the same year.

Over the years since 2008’s MacBook and MacBook Pro, Apple had released several models with upgraded hardware such as Intel’s Core i5 and i7 CPUs, improved battery life and in 2011 included Intel’s Thunderbolt technology. A new size of the MacBook Pro was also released in 2009, which allowed people to buy a 13-inch laptop that still encompassed all of the features that were included in the larger models – for a slightly lower price too!

The year of 2012 saw the highly anticipated release of the “Next Generation MacBook”: A super-thin and lightweight laptop. Something that had never really been achievable in high functioning laptops previously. Of course, when making a laptop lighter and thinner, there are always concerns about whether it will still perform to a high standard. At 0.71 inches thick and weighing 4.46 pounds, this new MacBook range impressed the masses. The range was much thinner than its predecessors and made using a solid-state storage (SSD) a standard component.

The biggest selling point for this range was that it included a high-resolution Retina display screen. At the time of release, it had the latest Intel Core processors, faster graphics and flash storage that was up to twice as fast as the previous generation.

Since the MacBook range released in 2012, Apple have been constantly improving on the models that are launched. The MacBook Pro, Apple’s higher-end laptop is available in both 13-inch and 16-inch options. The current generation 13-inch MacBook Pro was introduced in October 2018. It featured a new a touch-sensitive OLED display strip located in place of the function keys, a Touch ID sensor integrated with the power button, and USB-C ports that also serve as Thunderbolt 3 ports.

Apple is constantly updating and altering their laptops to suit the consumer market at the time. As a company, it has made several strides in the technology industry. To this day, Apple still makes impressive breakthroughs, challenging ideas to achieve and do more for its users. The quality and performance of Apple laptops is recognised worldwide, as they have been designed to be long-lasting and reliable. If you are interested in finding your perfect Apple laptop, why not check out this page.