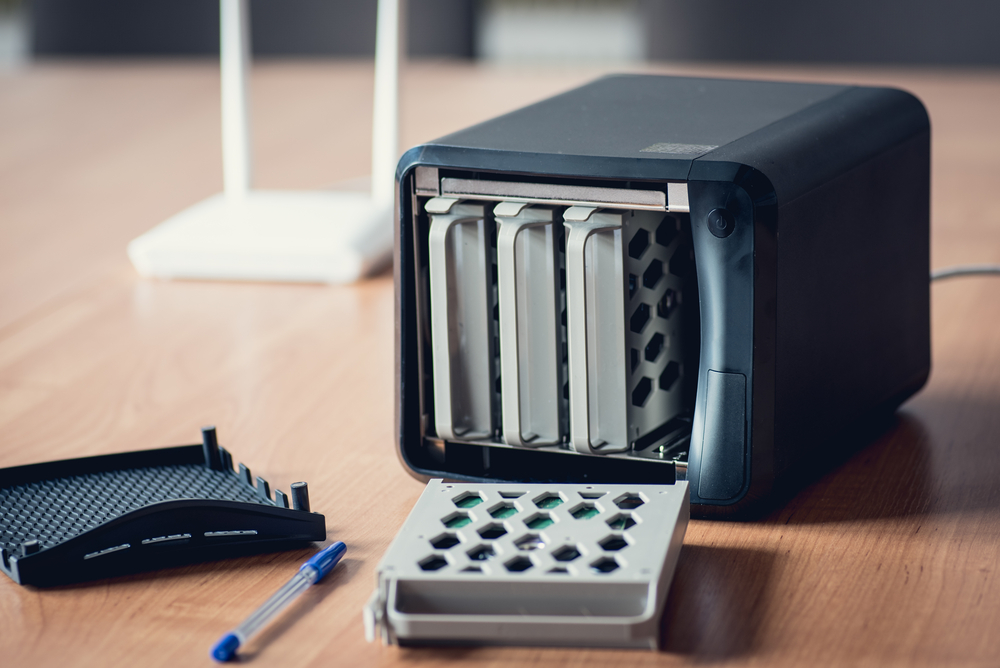 When looking to extend storage capacity on a system there are many options – each with their own different bonuses and drawbacks. To help narrow down your search, we’re looking at two of the most popular choices: NAS Drives vs Desktop Drives. We’re pitting them against each other in order to evaluate their effectiveness.

If you’re unsure what NAS Drives and Desktop Drives actually are, you’ve come to the right place. We’re going to shed some light on the hardware before exploring which might be the best choice for you (which will depend on what you need it for).

Whether you’re looking for a drive to assist you at home or in the office, there are options suitable for either. So, let’s take a look at what each drive actually is.

What is a NAS?

A NAS (Network Attached Storage) is as straightforward as it sounds. It’s a storage device which is connected to a network and allows the storage and access of data from a central location. This central location is where the primary data is held and can only be accessed by authorised network users and varied clients.

NAS are flexible and are capable of being scaled out, meaning that as you need additional storage you can simply add to what you already have. A NAS is often compared to having a private cloud in the office or at home for select users. It’s faster, less expensive and provides all the benefits of a public cloud on site, giving you complete control.

NAS are often recommended to SMBs, due to them being very simple to use, negating the need for any professional IT department or specialists. This makes them really cost-effective, as not only do you not need a team of experts to run it but the device also itself is cheap to run.

As an SMB if you don’t have the extensive skillsets available in employees or large budgets to splash in system management, having network storage which is easy to use is essential. NAS offer easy data back-up, meaning it’s always accessible whenever you need it.

Arguably the best thing about NAS is that they are good at centralising data storage in a safe and reliable way which can be accessed by only authorised users in a controlled manner. This method of storage prevents data from falling into the wrong hands or being used for malicious purposes.

While there are many positives, there are also the negatives which can cause issues to businesses the size of SMBs. One of those issues can occur if a document, for example, has been edited or updated and those changes haven’t been authorised, meaning when another user attempts to access it, meaning there is potential for out-of-sync data.

Other issues with NAS such as reliability and accessibility issues can occur if storage goes down. This would leave users with the inability to access any of the data in the storage, which in turn could result in delays in responding to customer service requests or sales queries. Setting up RAID (Redundant array of independent disks) would help assist with this issues. Any NAS which has more than 2 bays will allow for RAID in at least one level.

Desktop drives offer extensive storage much like NAS drives but aren’t connected to a network in the same way. It’s where data is stored for the long term — not just the things you save, but all the code required for the operating system, the framework browsers use to access the internet, drivers for accessories, and everything else.

Each hard drive has a specific amount of space, some of which is automatically consumed by the operating system and backup installations. However, the rest can be used to store the data which you download and save, whether it’s a new app or series of documents.

Hard drive space isn’t as important now as it once was, due to cloud-based software which doesn’t require local storage. Data can be stored in the cloud as well, helping free up space on the hard drive, a method which may be crucial if large amounts of your desktop drive are being used for other things.

Cloud-based dependency, systems which rely on remote servers and their hard drives in data centers, is what led to Google creating their Chrome OS platform. Chromebooks have very little physical storage space due to their reliance on streaming and cloud solutions, this is something users need to consider when choosing their computer and OS.

There are two types of desktop drive: Internal and external.

An internal hard drive is located inside a computer and is directly connected to the motherboard, but it’s not always upgradable. For example, on a desktop PC, the side can be easily removed to disconnect the old drive and connect the new drive. It’s a quick, simple upgrade.

But on laptops, the upgrade process is far from simple and typically not possible. Apple MacBooks, don’t have removable storage and others, although they may offer it, may be extremely difficult to upgrade it.

External hard drives are exactly as they sound, outside of the PC and often connect through a USB cable. This option is typically slower due to the connection, but it can also be detached from the PC without any major issues. This allows the hard drive to be upgraded to a much larger size.

In addition to internal and external, a hard drive can be a hard disk drive (HDD) or a solid-state drive (SSD). There’s a big difference between the two which you can learn more about in our Storage Wars! SSD vs HDD article. But, to give you a quick overview, here’s a bit of info on HDDs and SSDs.

A hard drive disk uses a spinning magnetic disk to hold information, however, this does add to its list of moving parts, which also includes heads to read and write data to the disk as needed, and propulsion to spin the disk. It’s an extremely simple method, meaning HDDs are often the cheaper of the two.

As for solid-state drives there aren’t any moving parts as these drives use semiconductors which store information by changing the electrical state of very tiny capacitors. It sounds extremely technical – but luckily it’s not something you need to worry about as SSDs are highly reliable. They’re also much faster than HDDs and have a much longer life span, making them the popular choice.

Using a desktop drive can cause vibration, noise, and heat. These drives also have high performance options so that disks can rotate faster and read data quicker. Lower speeds create less vibration and noise, but of course, they won’t be able to read the data as quickly.

With NAS drives, you never have to compromise on speed for quieter and cooler operation. Most NAS drives feature anti-vibration technologies which prevent the drives from creating too much vibration and noise, while maintaining high-speed performance at the same time.

When the two are pitted against each other, its clear that they each have their benefits, each made more significant depending on your uses for them. For example, if you’re an MB looking for a cheap and reliable storage solution which users can access then a NAS would be your most sensible option.

Desktop drives would be more suited to those who don’t need multiple users to access the centralised data and don’t need it to run continuously. Desktop drives, in their SSD form, are reliable, easily portable and would be ideal for personal use or secure use by a select few users.

If you’ve made up your mind and are looking to get your hands on either of these drives, then head over to our website to get your own today.