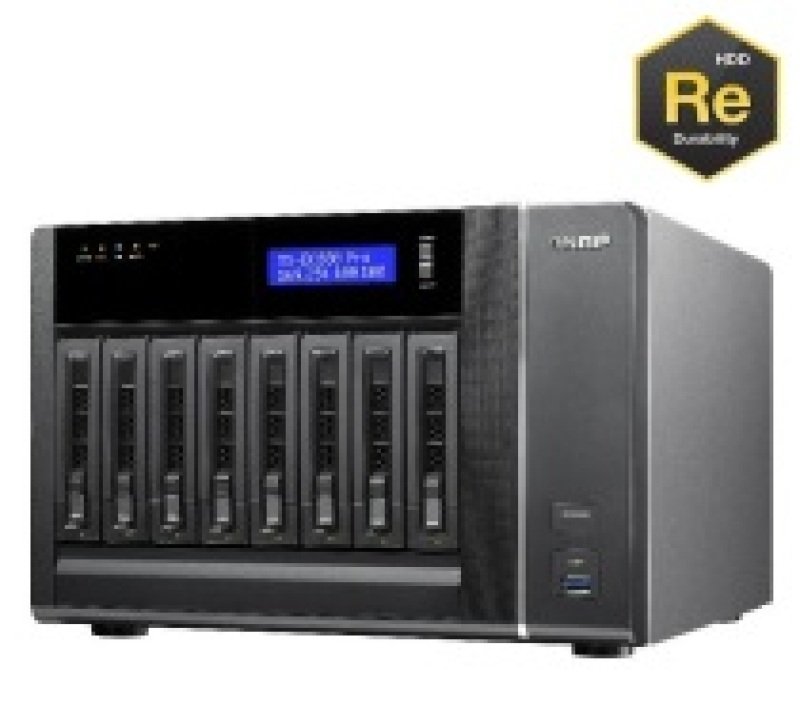 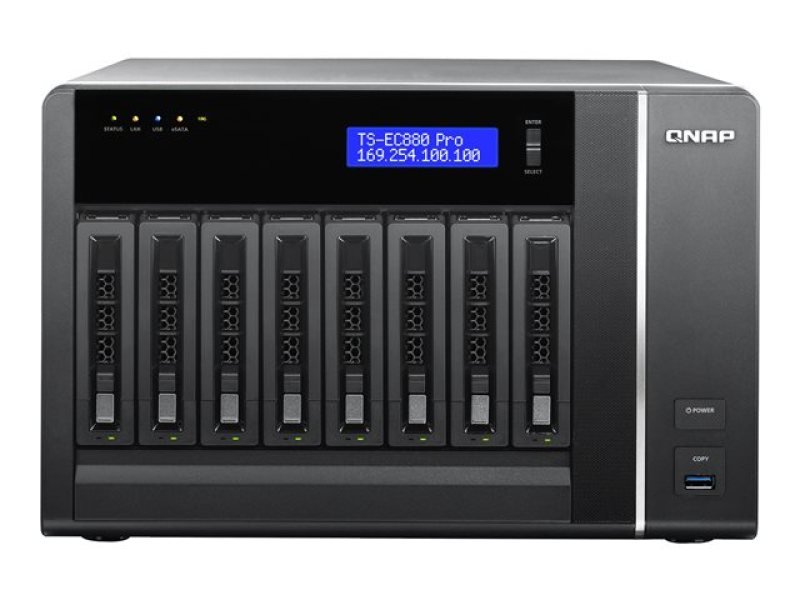 The TS-EC1280U-RP supports two on-board mSATA internal cache ports, and up to 4 SSDs can be used for caching. By installing mSATA flash modules (optional purchase), the IOPS performance of storage volumes can remarkably boost. It is perfect for improving overall workflow of random IOPS demanding applications such as database and virtualization. The internal cache port design reserves the space of hard drive tray for more storage capacity.

The TS-EC1280U-RP supports online capacity expansion by cascading multiple QNAP RAID expansion enclosures to meet the needs of growing business data. With the QNAP scale-up solution, raw storage capacity can be gradually expanded to 700TB. It is especially useful for large data applications, such as video surveillance, data archiving, and TV broadcast storage, to name few.

The TS-EC1280U-RP offers well-rounded backup solutions as a reliable backup center. QNAP NetBak Replicator supports scheduled and real-time data backup on Windows OS. Mac Time Machine is also supported to provide Mac OS X users with an effortless solution to back up data to the TS-EC1280U-RP.

The TS-EC1280U-RP offers various data recovery options. RTRR (Real-Time Remote Replication) supports real time or scheduled data backup to a remote Turbo NAS or FTP server and synchronizes files to a remote folder from a local folder with better backup efficiency and reduced backup time. The TS-EC1280U-RP also supports rsync protocol to back up data to another remote server on scheduling basis. Besides, data can be backed up to cloud storage, such as Amazon S3, Amazon Glacier, Microsoft Azure, ElephantDrive, Symform, Dropbox and Google Drive, and restored to the TS-EC1280U-RP anytime.

In the open network environment, business data might be exposed in potential hack. The TS-EC1280U-RP provides numerous security options, such as encrypted access, IP blocking, and so on. Besides, IT administrators can control the access rights of each user to different folders, preventing unauthorized access to important files. The TS-EC1280U-RP is validated with military level FIPS 140-2 AES 256-bit encryption, preventing the sensitive business data from unauthorized access and breach even if the hard disk drives or the entire system were stolen.

Optimize IT assets management with the IT Management Station

The IT Management Station, powered by Mandriva Pulse, provides a flexible IT system management solution for managing multi-OS and multi-site IT assets for businesses of all sizes. By installing the IT Management Station on the TS-EC1280U-RP, you can centrally manage multiple IT resources with numerous business applications including comprehensive inventory, centralized software deployment & updates, imaging, remote management & support, backup & restore, and more tasks with greater flexibility and productivity.

Digital film and video production produces volumes of data that require high performance RAID storage with sustainable throughput to balance with the demanding output of video editing. The TS-EC1280U-RP fulfills storage and video editing needs with a high speed 10GbE network interface. Digital videos can be quickly stored and edited on the TS-EC1280U-RP directly over the network. File synchronization across multiple devices

The Qsync utility turns your TS-EC1280U-RP into a safe data center for file synchronization with large storage capacity. Any file uploaded to the TS-EC1280U-RP will be made available for all linked devices, such as computers, laptops or mobile devices. Qsync is especially useful for frequent travelers to manage files and always have the most updated files on different devices. Qsync provides multiple ways of file synchronization and group file sharing, greatly enhancing the flexibility of collaboration.

The TS-EC1280U-RP Surveillance Station is a professional surveillance solution with a wide range of over 2,600 compatible IP camera models and expandable IP camera channel licenses. It supports real-time monitoring, video and audio recording and playback with flexible options to customize. You can also install the VMobile app on your iOS® or Android™ mobile devices to manage the monitoring channels anytime and anywhere, and safeguard your office environment.

The TS-EC1280U-RP has built in App Center providing various install-on-demand apps developed by QNAP and third-party developers, including backup/sync, business, content management, communications, download, entertainment, and so on. It’s also a central place to manage and update installed apps. Besides, QNAP’s development platform brings forth the open-source spirit to welcome program developers to develop various applications, adding values to the TS-EC1280U-RP for extensive opportunities.