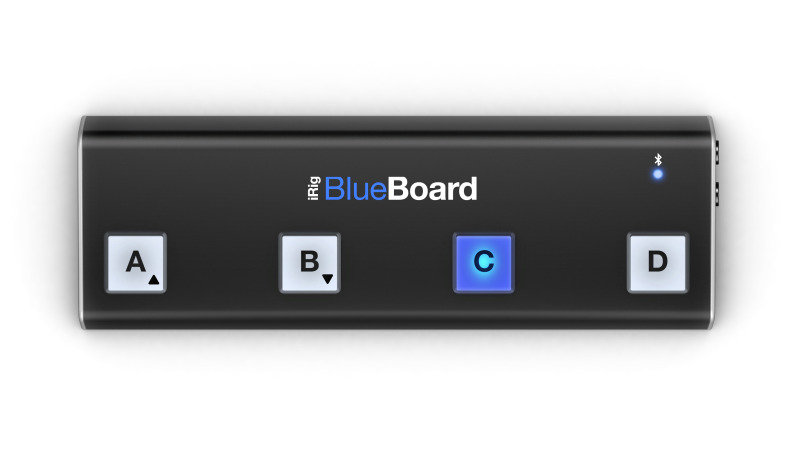 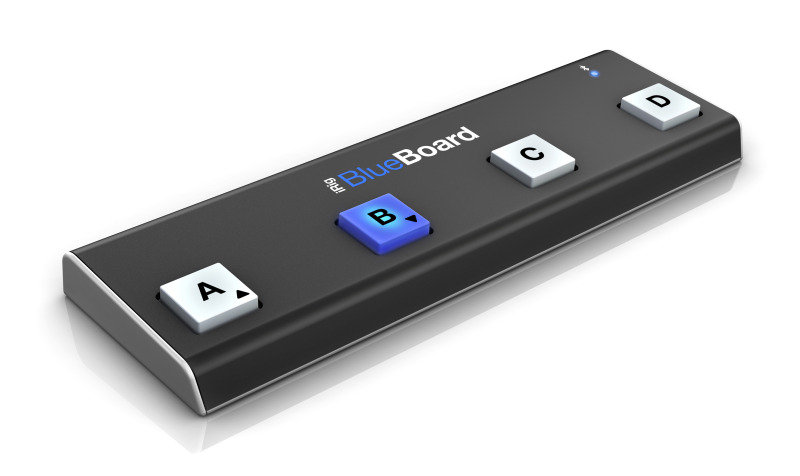 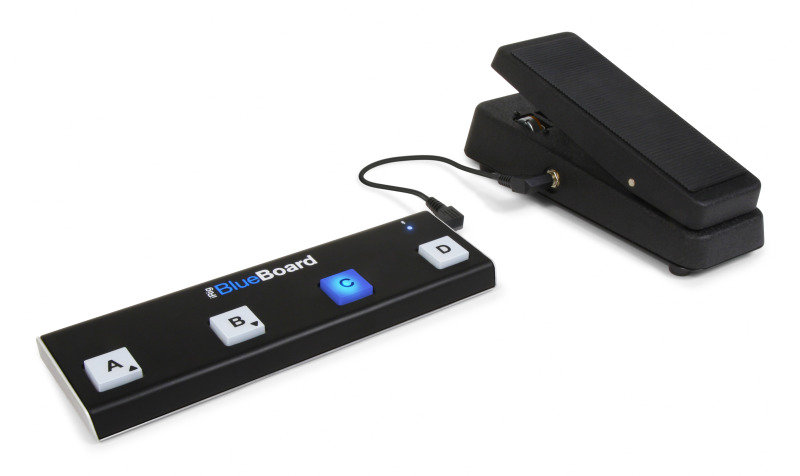 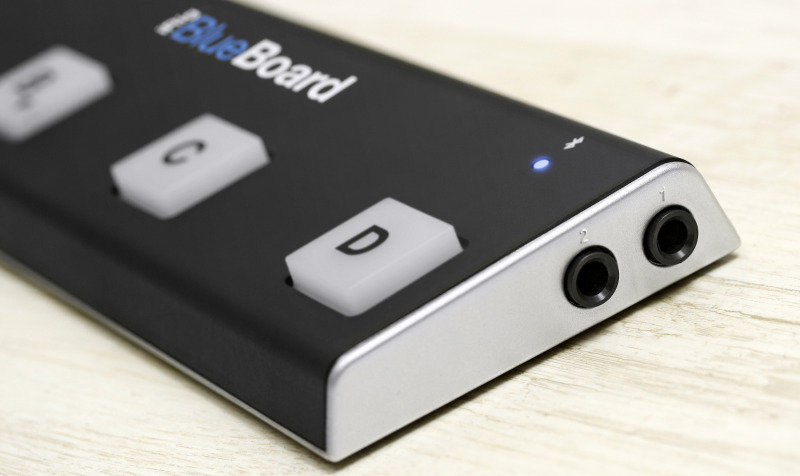 iRig BlueBoard is the first wireless MIDI pedalboard for iOS and Mac that allows you to control your music apps and more from the floor.

Now control parameters of your favorite MIDI-compatible apps like AmpliTube wirelessly with ease. Switch between pre-sets, change patches, turn effects on and off and control effects like volume and wah without worrying about tripping over wires. Setup is as simple as turning iRig BlueBoard on and telling it what you want to control.

So how does iRig BlueBoard work? It connects to your iPhone/iPod touch/iPad or Mac via Bluetooth, and when you press its foot switches, it sends out control signals that are converted to MIDI by the iRig BlueBoard app. iRig BlueBoard's latest firmware supports Apple's Bluetooth LE MIDI for iOS and OS X (read more about the firmware update here). Apple's Bluetooth LE MIDI protocol transforms all MIDI data transmitted over Bluetooth into core MIDI data for simple, plug-and-play use with any MIDI-compatible app on both iOS 8 and above and OS X Yosemite and above. At this point the MIDI messages are available to virtually any MIDI compatible app on your iOS device or Mac.

iRig BlueBoard can be used in different modes to send different kinds of MIDI control information. The first mode allows iRig BlueBoards 4 buttons to be used to send on/off information to apps like AmpliTube, so users can stomp their favorite effects on and off just like a physical stompbox. The second mode works similarly, except that it only sends MIDI information for as long as the button is pressed, which is perfect for things like a sustain effect when used with piano sounds contained in apps like SampleTank or iGrand Piano. In addition to these apps, iRig Blueboard can also be used with many popular third party apps and software, like Apple's GarageBand.

iRig BlueBoard works seamlessly with AmpliTube. To use them together, all you need to do is find your iRig BlueBoard device in AmpliTube's integrated BlueBoard section and you'll be ready to go. You get a PRESET mode (to browse presets), a DIRECT FX mode (to control single parameters, like switches and knobs) and a new "Global Controls" feature that let's toggle the tuner, switch banks and presets, control the recorder and a whole lot more. Pair iRig BlueBoard with the latest version of AmpliTube and get full control - all without using your hands.

Control from 10 meters away

iRig BlueBoard communicates via Bluetooth technology so you can place it up to 10 meters (32.8 feet) away from your device and still maintain full control of your apps. The low-profile iRig BlueBoard is only 9.1" (23cm) wide, and it runs on 4 - AAA batteries.

Because it communicates with the mobile device via Bluetooth, it leaves the 30-pin, Lightning and mini-jack connector on the mobile device free for connection with other IK accessories like iRig Pro Duo, iRig Pro, iRig HD, iRig Stomp, iRig 2, iRig Mic, iRig MIDI 2, iRig Keys or any other favourite accessory.

Light up the night

iRig Blueboard has 4 backlit control pads housed in a sturdy stage-worthy chassis. Each pad has an additional LED that lights when the pad is active, letting you know exactly which control is on. And since it's backlit, you can easily see it on a dark stage or performance venue for quick and accurate access.

iRig BlueBoard also features two expansion TRS jacks so you can add more expression to your performance. Plug your continuous MIDI controller like wah or volume style pedals into these expansion jacks to add even more control and performance versatility.

Designed by and for musicians

Guitar, bass and keyboard players and singers will now be able to play and control their preferred iOS apps on stage or in studio, with the same degree of performance control offered by traditional music hardware and the freedom of not being tethered by cables. Plus, iRig BlueBoard is small enough to fit in a laptop bag. iRig BlueBoard companion apps for other computer and mobile platforms will also be available the near future.

Compatible with Mac and iOS devices