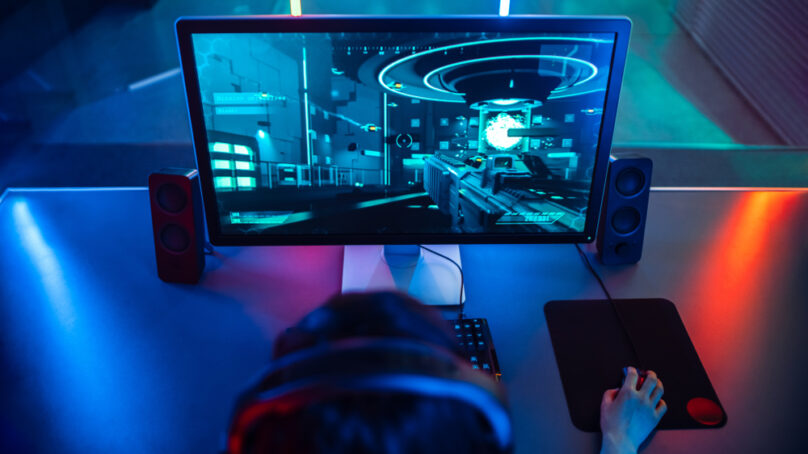 It’s remarkably fast for an IPS panel, with a 1ms response time that’ll keep up with the 144Hz refresh rate for minimal ghosting and trails behind your gaming mouse movement. This is particularly important for fast-pace, twitchy and competitive games. A high refresh rate shows you many more images a second, but a fast response time ensure they don’t smear together. You opponents won’t be a blur, you’ll be able to make out their every move, giving you an upper hand.

Approaching the level of a low-end VA panel, the MSI Optix G241’s contrast ratio is surprisingly high for a IPS panel and a gaming monitor in general. IPS panels tend to have a vivid colour reproduction and wide viewing angles, but struggle with contrast ratio. This monitor is different. It makes the MSI Optix G241 not only great for competitive gaming, but playing the latest AAA releases and watching movies too.

For gaming in 2022, the ASUS TUF Gaming VG27AQ ticks all the right boxes. Starting off with the 1440p resolution. As detailed below, we believe this is the best resolution for a gaming monitor. In-between 1080p and 4K, it’s sharp without completely tanking your frame rates.

Out of the box, the ASUS TUF Gaming VG27AQ runs at a 144Hz refresh rate, but easily overclocks to an even faster 165Hz. As long as your graphics card supports a DisplayPort output, overclocking this gaming monitor is simply a case toggling it on the OSD. 144Hz is fast, but an extra 21Hz for a couple seconds of work is nothing to scoff at.

In its default configuration, the response times are respectable, in line with what you’d expect from a fast IPS panel. However, what makes the ASUS TUF Gaming VG27AQ stand out is that it can run motion blur reduction (backlight strobing) and variable refresh rate simultaneously, for extremely low persistence images. ASUS calls it ‘Extreme Low Motion Blur Sync’ (ELMB SYNC) and this monitor was the first to feature it. As it strobes the backlight – rapidly switching it on-and-off – the monitor appears dimmer, but it makes images so crisp and clear.

If you want a gaming monitor that doesn’t have any obvious weak points, we’d recommend the ASUS TUF Gaming VG27AQ.

We thought we’d recommend a gaming monitor that’s a bit out-there for our last pick. With a 32:10 aspect ratio, the ASUS ROG STRIX XG43VQ is the most ludicrous gaming monitor we’ve covered on the Ebuyer YouTube channel and Ebuyer Gaming Hub yet.

Stretching to 43”, the breath-taking ASUS ROG STRIX XG43VQ is classified as a super ultra-wide. It’s the equivalent of two 24” 16:10 aspect ratio monitors side-by-side, giving you a huge amount of uninterrupted, bezel-less desktop real estate. If you’re a heavy multi-tasker, you can load up so many windows on this monitor. It makes it a great choice for live-streamers; your content in the middle, with audience chat and broadcast monitoring flanking either side.

As you can imagine, the implications on gameplay are huge too. Engulfing your peripheral vision with a pronounced 1800R curve, gaming on the ASUS ROG STRIX XG43VQ is highly immersive. With a high field-of-view, racing games and simulators come alive on this gaming monitor. Make sure to check out the below video for a demonstration of Doom Eternal, Microsoft Flight Simulator and Forza Horizon 4 running on this gaming monitor!

Ever since the introduction of the last generation of console’s mid-gen refresh (PlayStation 4 Pro and Xbox One X) which promised a 4K (or at least 4K-like) resolution, 1080p began to fall out of favour. However, even in 2022, we believe this humble resolution still has its place on the market.

Ultra-high resolutions, such as 4K or the imminent 8K, are mostly intended for enormous, wall-spanning televisions for the living room. At these 50” and higher sizes, you need the higher pixel density 4K and 8K affords. Otherwise, individual pixels are blown up to too large of a scale that any resemblance of clarity is gone.

Whereas on a monitor form-factor – 24” is most common – pixels are squished together in a tighter space. Even though a 50” 4K television has many more pixels to work with – around four times as many as 1080p – it turns out the pixels-per-inch (PPI) is lower than a 24” 1080p monitor – 88 PPI on the TV as opposed to 92 on the monitor.

So, at an equal distance away from the panel, the monitor would appear sharper than the TV, despite the huge gulf in resolution. On a gaming monitor, 4K isn’t as strictly needed as it’s on a television. It’s partly why we’ve seen a big push towards 4K gaming on the living room-bound consoles. Conversely, PC gamers haven’t been so obsessive over 4K gaming, instead opting for high refresh rates, which we’ll get into later.

What’s the best resolution for a gaming monitor?

However, this rule of PPI applies to monitor sizes too. Since we sit much closer to our monitors than to our televisions – an arm’s length away is suggested – we’re also more scrupulous to resolution changes. 1080p might look fine at 24”, but extend this any further beyond 27” and the lack of a decent PPI soon becomes noticeable. If you want a larger monitor, you’ll need to up the resolution accordingly.

As stated, 24” really is the so-called sweet spot for 1080p, as the PPI’s relatively high. 24” is a favourable size among competitive gamers, as it’s not too large that the monitor’s edges start to creep into your peripheral vision. A more compact monitor means you can keep tabs on every inch of the monitor, at all times. You won’t have to crane your neck from the mini-map to the in-game chat, glossing over important gameplay in the process.

Depending on your tolerance, you might be able to get away with 1080p at 27”. Even though it’s only a 3” increase in size, the clarity goes from decently sharp at 24” to noticeably blurrier at 27”. With the PPI dropping from 92 to 82, it’s the absolute max size we’d recommend for 1080p monitor.

However, these figures don’t exist in a vacuum. When discussing resolutions, we always have to take performance into account as well. A graphics card has to render the pixels – and a 78% increase sounds a whole lot more manageable than a whopping 200%. You’ve got ask yourself whether it’s worth the hardware requirements for a higher resolution, or if you’d rather spend the power elsewhere – on higher frame rates and graphics options.

The Best of Both Worlds

It’s why 1440p monitors are so popular among gamers in general. It strikes an ideal middle ground between the clarity of full fat 4K and the performance considerations of 1080p. It’s as if 1440p clears a layer of Vaseline from your monitor. Edges of a game world’s geometry are sharper, and the detail of high-res textures are resolved better.

Modern game engines heavily rely on temporal anti-aliasing (TAA), you’ve probably noticed it in a game’s graphical options. Without delving into the technical details, TAA does a great job at smoothing over stair-step edges, but softens the image quite aggressively. 1080p’s lower resolution and TAA’s blur combined can sometimes be too much, whereas 1440p helps claw back the clarity.

Yes, you’ll take a performance hit running at 1440p, but it’s not nearly as bad as 4K. Modern mid-range and high-range GPUs can handle 1440P adequately. Native 4K – that’s over 8 million pixels rendered every frame – is often too much, requiring a reduction in graphics and/or frame rate.

Furthermore, you can only push so much bandwidth through a display interface. Current iterations of HDMI and DisplayPort have limits; HDMI 2.0 and DisplayPort 1.4 have an 18 Gbps and 32Gbps maximum bandwidth respectively. There are more up-to-date iterations, but they’re either largely relegated to TVs (HDMI 2.1 with 48Gbps) or long delayed (DisplayPort 2.0 with 80Gbps).

For the time being, manufacturers must make a decision as to what’s the best way to divvy-up a gaming monitor’s bandwidth. Broadly, it’s broken down into three main categories; a lower resolution but a higher refresh rate (1080p/240Hz+), a higher resolution but a lower refresh rate (4K/60Hz), or a middle-of-the-road (1440p/144Hz). HDMI 2.1-equipped monitors are exceedingly rare, but Ebuyer does stock a few. We’ll see more as the year progresses.

Recently, we’ve witnessed an explosion of gaming monitors targeting a 1080p resolution, but pushing bandwidth and panel technology to the absolute limit. Thought 144Hz was a high refresh rate? Think again – 240Hz is increasingly common and even 360Hz makes an appearance at the peak of Ebuyer’s range of gaming monitors.

Plot a graph of refresh rates and higher ones will decrease the render-to-display latency. However, as you progress further up the refresh range, you start to encounter diminishing returns. Going from a 60Hz refresh (16.6ms between frames) to a 144Hz (6.9ms between frames) is an undeniable leap in perceived motion smoothness, clarity and latency – a 9.7ms difference.

Going from a 144Hz refresh to 240Hz (4.2ms between frames) decreases it for a 2.8ms difference, but you can already see how the leaps start to taper off the higher you go. Line up a 144Hz and a 240Hz monitor side-by-side and, if you’ve got a gamer’s trained eye for refresh rates, you might be able to notice a difference.

However, it’s at a 360Hz refresh (2.8ms between frames) where the change becomes ever so slight – a mere 1.4ms saving – that’s only advantageous for only the most competitive of gamers and esports gamers. Going from 240Hz to 360Hz looks huge on paper. Another 120Hz is considerably faster than many bog-standard monitors. But when you look at the figures, the latency isn’t as big of a deal as the 84Hz leap going from 60Hz to 144Hz.

Remember, you’ll also need the hardware to run at such blisteringly fast frame rates. You might assume it’s only the GPU that matters in churning out frames, but when you’re running all the game’s underlying logic so many times each second – calculating physics, animation and more – the CPU needs to be up to scratch, too.

How to configure your new gaming monitor for optimal performance