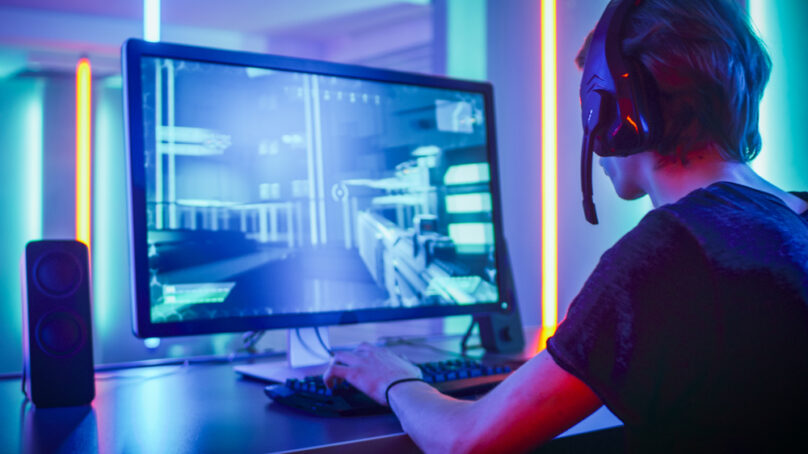 Pushing exceedingly high refresh rates and resolutions, gaming monitors are impressive pieces of kit. As with most high-performance technology, however, they require some slight manual tweaking and double-checking of options to ensure you’re getting the best experience.

Whether you’re picking up a new gaming monitor or tuning an existing one, here’s a check list every monitor owner should run through.

Modern computer components and peripherals have long since ditched old-fashioned analogue video signals in clear favour of digital ones like HDMI and DisplayPort.

If you’ve ever tuned into Ebuyer’s video coverage of gaming monitors over on our YouTube channel, you might’ve wondered why exactly guest presenter James frequently cites DisplayPort as his favourite video connector over HDMI.

Take a look at a gaming monitor or graphics card’s port selection, and in most cases it’s an equal split between HDMI and DisplayPort. If they both transmit a digital signal, are treated in equal measure from manufacturers and ultimately perform the same job, how could you really have a recommendable preference of one over another?

HDMI and DisplayPort are not strictly interchangeable. It feels as if HDMI has been around for a long time. We’ve hooked up multiple generations’ worth of game consoles, set-top boxes, streaming dongles and more over HDMI. So, it’s instinctive to reach for a good old HDMI cable – that you likely have laying around – to hook up to your new gaming monitor.

However, this is HDMI’s weakness. It was designed for a broad range of consumer-grade devices and has seen several iterations over the years to keep pace with technological advancement. HDMI 1.4, 2.0, 2.1 – each one supports vary levels of bandwidth.

There have been situations in which the HDMI connector used on a gaming monitor couldn’t supply enough bandwidth to run it at max spec. On a blisteringly fast 165Hz and 1440p gaming monitor, ‘HDMI 2.0b’ would top out at 144Hz for instance.

Whereas DisplayPort – a newer standard designed strictly around monitors – would likely work no fuss. DisplayPort has its own iterations and limitations, but it’s the one gamers favour in a pinch, without consulting a spreadsheet of bandwidth figures.

For a gaming monitor, it’s highly likely that the DisplayPort is the primary and intended connector, with HDMI chucked in for good measure as it’s so prevalent. Hook up your beastly gaming rig over DisplayPort for maximum specs and use HDMI for game consoles, capture cards and more.

Plugging into motherboard vs GPU

The most common beginner’s mistake we see among novice PC gamers is plugging their gaming monitor into the motherboard’s video connector, instead of the graphics card. It’s completely understandable as to why they do it. They look identical, but it’s wince-inducing once you know the implications.

Plugged into a motherboard, the video signal is rendered and routed from your CPU’s low-powered integrated graphics and not your high-performance discrete graphics card. Some desktop CPUs don’t come with integrated graphics, so you’ll know immediately something’s up when no image is displayed at all. If yours does – that includes most Intel CPUs – an image will be displayed, deceiving you.

You’ll be able to navigate the desktop and browse the web just fine on integrated graphics, but graphically intensive games will struggle while your expensive paper weight of a graphics card sits idle and unused. This can often lead novice PC gamers into a state of panic thinking their graphics card is underperforming and broken, when all that’s needed to fix it is swapping a cable around.

Both the graphics card and motherboard’s port selection is found at the rear of the computer case. The motherboard is found nearer the top and its video connector is surround by a bunch of other connectors – USB, ethernet and audio jacks. The graphics card is located further down the case, with its video connector often orientated in a horizontal PCIe bracket as pictured. Make sure your gaming monitor is plugged in here, and you’re good to go.

Windows, the most popular operating system for PC gaming, isn’t the greatest at detecting and switching to a new monitor input. You might’ve picked up a high-end gaming monitor – with a high refresh rate and pin-sharp resolution – but Windows has an annoying tendency to default to lower values for compatibility reasons. 60Hz displays on image on a 144Hz monitor, but 144Hz on a 60Hz monitor results in a blank screen and a ‘signal lost’ warning.

This means you must dig into Windows’ display options and double-check your resolution and refresh rate is set to their highest values your monitor supports for maximum enjoyment. Otherwise, you could be running your fancy gaming monitor at its lowest spec without realising.

It’s an all-too-common occurrence to read accounts of disgruntled gamers on online forums who’ve unknowingly ran their 144Hz gaming monitors at 60Hz for years before noticing. After all, if you are a new PC gamer who’s never experienced a high refresh rate, how are you supposed to notice?

Fortunately, changing resolution and refresh rate on modern iterations of Windows requires only a few clicks. Simply right-click anywhere on your desktop and select ‘Display settings’ on the box that appears.

For refresh rate, continue to scroll down further until you see clickable ‘Advanced display settings’ text. Click through, and on the newest Windows builds, you’ll be presented with another drop-down box to select refresh rate.

For those running older builds like us, continue to click on ‘Display adapter properties’ for your gaming monitor, a pop-up window should appear. Cycle over to the ‘Monitor’ tab and here you can change refresh rate instead.

As we’re already adjusting options in our operating system, let’s ensure variable refresh rate is enabled. Otherwise known as adaptive sync, or its branded names: G-Sync for NVIDIA and FreeSync for AMD. Whatever it’s labelled under on your gaming monitor, it’s a must-have feature often toggled off out of the box for, again, compatibility reasons.

Rather than having your gaming monitor fixed at an unwavering refresh rate, variable refresh rate allows it to synchronise one-to-one with your graphics card’s frame rate. You can game at wildly arbitrary frame rates – say 87FPS on a 144Hz gaming monitor – without incurring ugly screen tears, micro-stutters and input lag.

Enabling it is a two-step process. First via hardware on your gaming monitor’s on-screen display, before turning it on via your graphics card’s control panel. As mentioned, every monitor insists on using its own unique name. Flick though the on-screen display until you stumble upon ‘variable refresh rate’ and the like, and toggle it on.

Now, to open up the control panel – ‘AMD Radeon Settings’ for AMD GPUs and ‘NVIDIA Control Panel’ for NVIDIA GPUs – either: right-click your desktop, expand your system tray or use Windows’ search, and open it. From here, exact instructions vary on GPU brand, but navigate to a ‘Display’ tab and you’ll quickly find a sub-option for variable refresh under its associated name.

Your monitor may flicker as it switches between modes and now you can enjoy tear-free and stutter-free gaming! It also may not be immediately apparent what’s changed when you’re sitting on the desktop. To ensure it’s working as intended, many monitors have a refresh rate counter you can enable in their on-screen display. If variable refresh rate is doing its thing, this counter should match your in-game FPS counter.

With the checks completed, you can now game in comfort knowing everything’s set up as intended for the optimal experience. Need a rig to power your gaming monitor? Here’s the specs you should be looking for in a gaming PC. And check out our build for gaming in 2022 and beyond.