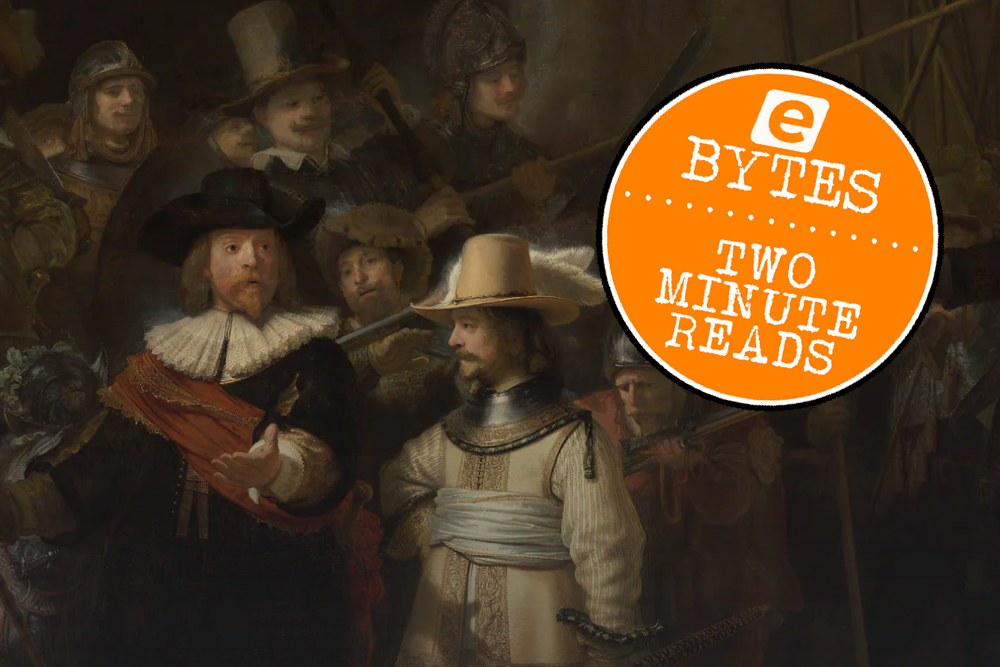 The Rijksmuseum has wowed art lovers and tech fans across the world once again, by applying technology to the restoration and preservation of a masterpiece. This time they have made an extremely high resolution photograph of Rembrandt’s 1642 work The Night Watch available online.

When we say ‘extremely high resolution’ we really mean it. Online visitors to the website of the national museum of the Netherlands (which is physically based in Amsterdam) can spend time examining a staggering 717 gigapixel image. This is the largest and most detailed photograph of any artwork in the world, and it is so detailed that it’s possible to zoom in on minute, pin-sharp particles of the painting’s pigment.

Shop for cameras at Ebuyer

The team responsible for the final image used a 100-megapixel Hasselblad H6D 400 MS camera to make 8439 individual photos, each of which measured 5.5 x 4.1cm. The depth of field for each individual photograph was just 125 micrometres, or 0.125mm. To ensure that each image was in focus, it was necessary to first scan the surface of the painting using lasers and a very accurately calibrated camera. After each photograph was taken, a neural network was used to check the image for colour and sharpness. Artificial Intelligence was deployed to stitch all of these smaller images together to form the final large photograph, which has a total file size of 5.6 TB (terabytes). That’s a lot of data!

In the recent past the painting has been subject to other technological preservation techniques. During its four hundred and eighty year history, several pieces of The Night Watch have been cut off. Back in 1715 the canvas was trimmed by 23.6 inches from the left side, 9 inches from the top, 4.7 inches from the bottom, and 2.8 inches from the right. This was done so that the painting could fit between two doors at Amsterdam’s city hall – which seems like an absolute tragedy, now.

The original sections which were removed have never been found. However, the painting was copied in the 17th-century, and so there is a reference. The AI involved thoroughly examined this copy, and took account of colour, lighting etc – and then algorithms detailing Rembrandt’s brush strokes and other techniques were applied, to carefully reconstruct the appearance of the original’s missing pieces. This augmented version was removed from public view as the museum did not wish to deceive viewers that they were seeing the actual original.

The painting has a somewhat strange history and due to numerous physical attacks in the past, restoration techniques have been well-used to keep Rembrandt’s work ‘alive’. Almost unbelievably, it has been slashed by a former Navy chef and later by an unemployed school teacher, and has been sprayed with acid by an escaped psychiatric patient.

The current ‘Operation Night Watch’ is the most wide-ranging research and restoration project in the history of Rembrandt’s masterpiece (the name of which has come into common use, though it was originally known as either The Shooting Company of Frans Banning Cocq and Willem van Ruytenburch or Militia Company of District II under the Command of Captain Frans Banninck Cocq).

The ultimate goal of the Operation Night Watch team is to conserve the painting for the future in the best way possible. As technology develops further, this will be increasingly possible in new and interesting ways.

Shop for cameras at Ebuyer

Work started in summer 2019, and takes place in a specially designed, transparent glass chamber, which means that the visiting public can see the process as it is happening. Obviously the pandemic has vastly affected this – so it’s great news that this new ultra-high resolution image of one of the world’s greatest treasures is now available online for you to see on your desktop PC or laptop, tablet or smartphone, from the comfort of your own home, wherever you are in the world. You don’t have to be an art lover to appreciate the fantastic use of tech!

Bye-bye Blackberry
Are Netflix prices going up?
To Top