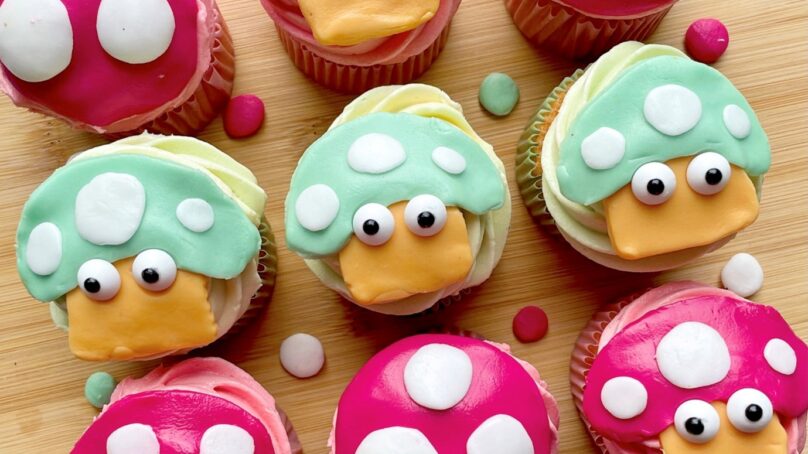 Have you ever looked at a Minecraft cake or any recipe from the Breath of the Wild and thought, ‘****, that looks good?’ Maybe Skyrim’s sweet rolls have got your stomach rumbling with the prospect of finding out if they really are that sweet?

Well, if you have, you’re not alone. Nowadays, plenty of the food in our games leave our mouths watering with jealousy as our character happily devours it on screen. There’s no reason we shouldn’t be able to enjoy those tasty treats too. That’s why we took on the challenge of finding the video game foods gamers most wanted to eat, and then recreated them ourselves!

Teaming up with a professional chef, our team used tools such as Google Search Trends and Linkfluence to determine which games were currently most popular, and what video game foods everyone was searching for. Taking all our research, we’ve created a list of 5 favourites. Some are from the most popular games of 2021; others are nostalgic classics. Either way, they’re all delicious.

Read on to see if you agree with our findings and try out the recipes for yourself!

You knew it would make the list, but even we were surprised to find out just how many people were eager to bring this iconic treat to life. People all over the UK have been searching for Minecraft Cake Toppers in the past 30 days on Google. However, this is dwarfed by those searching for how to make a Minecraft cake, which has risen by over 250% in the last year since the 1.18 updated.

After discussing how best to recreate an authentic Minecraft feel, we settled on an easily replicable miniature buttercream cake. Our chef even made a mini Mooshroom to go with it.

• First, begin preheating your oven to 190 degrees and then grease two square baking dishes.
• While this is heating up, mix your cake’s butter and caster sugar in a large bowl until it’s fluffy and light.
• Next add your egg, milk, and vanilla extract and mix everything again until it’s fully combined.
• Making sure your flour is sieved, slowly add it to your mix along with the baking powder, mixing it until you have a lovely pale-yellow batter.
• Taking your baking dishes, add a layer of batter into the bottom of each and then put them in the oven and cook for 20 minutes.
• After 20 minutes, use a knife to carefully check to see if the centre is cooked by slipping it into the cake’s centre. If the knife comes out wet, bake them for another 5 minutes.
• Once your cakes are cooked, pop them into the fridge to cool.
• While they’re cooling, you can create your buttercream using the butter and icing sugar. Combine them in a large bowl, mixing them until you get a lovely creamy consistency while adding in the red food dye as you go.
• Once your cakes are cooled, them into 8 equal smaller squares. Then sandwich two together using jam and buttercream so you have 4 cakes.
• For the topping, roll out the red and white fondant and use the image above as a guide for the shape and style of decoration.
• And there you have it, a set of yummy Minecraft cakes ready to keep you going as you hunt for those hidden diamonds.

Monster Curry – Legend of Zelda: Breath of the Wild

Let’s face it, so much of the food in Breath of the Wild looks amazing. Even four years after its initial release, the game is as popular as ever. With a Zelda sequel announced for 2022, and November 12th marking the 35th anniversary of the very first Zelda game, we decided we just had to recreate a meal from the franchise.

There were a lot of options to choose from, but we eventually settled on the monster curry. Both for its unusual ingredients and distinctive, eye-catching purple colour.

• Place a large pan on a medium heat and add the butter and flour. When combined, they should create a thick paste. Next add the oil, chopped garlic cloves, and diced red onion, allowing it to brown.
• While that is happening, take another large pan and add enough salted water to cover the 3 red potatoes (which should be chopped into small cubes). Place this water on the hob and leave it to boil before adding your potatoes
• When your onion and garlic is browned, add the ginger puree, ground coriander, curry powder, Garam masala, and ground cumin. Whilst this is sizzling away, chop your chicken and beetroot into cubes and add them into the pan.
• After two minutes, add the chicken stock and coconut milk along with the star anise and cinnamon. Cover, reduce the heat to a simmer and allow the liquid to reduce.
• Once the potato is soft, drain it and it to your curry. This should help with thickening the sauce.
• When your sauce has been reducing for 15 minutes, add in the red cabbage and a few drops of purple food dye and stir. Place the lid back on the pan and allow to reduce further.
• After another 30 minutes, your sauce should have been reduced to a point where it is a deep purple colour and thick. Remember to remove your cinnamon and star anise before serving.
• Serve with rice and garlic naan bread and devour it before heading to the next boss.

The Sims marked its 21st anniversary in February this year, even though that makes them over two decades old, the franchise isn’t slowing down. The Sims 5 is on the horizon so we decided to flick through the Sim’s cookbook for a recipe that even they could make without burning the house down.

Simple and delicious, a taco casserole is the ideal centrepiece for a meal with friends, or if death decides to pop round for a cup of tea.

• Start by placing a baking dish to one side and preheating your oven to 180 degrees.
• Then, in a large pan on a medium heat, add the oil, diced red onion, minced garlic cloves, chilli, and bell peppers.
• Once the onion is brown and the peppers are slightly soft, add in your beef mince and allow everything to brown for 3 to 4 minutes.
• Next, add your can of chopped tomatoes and black beans, then bring the heat down slightly. Place the lid on the pan and allow it to simmer.
• Once the mixture has reduced and your meat is cooked through, add a layer of taco filling into the bottom of your baking dish about half an inch deep. Then add a layer of filling. Repeat the process as if you were constructing a lasagne until the baking dish is full. Ensure that the top layer is taco filling and then coat the top with cheese.
• Bake your masterpiece in the oven for 30 minutes, then serve with a sprinkling of cheese on top and olives and sour cream on the side.

You may not have heard, but Final Fantasy 16 is rumoured to be coming to the PS5 very soon. Final Fantasy: Stranger of Paradise became a breakout term over the past 90 days. The games are well known for their various recipes and who better to turn to for inspiration than Kenny Crow, the lead mascot of Crow’s Nest Fast Food Restaurant.

Out of the three foods on offer, we decided to pick the most exotic option, because fast food doesn’t have to be unhealthy. This recipe is a delicious one-pot wonder, meaning it is super simple and easy to put together.

• Preheat your oven to 200 degrees. While it’s heating up, make sure the salmon is skinned and boneless.
• Place a large pan on a medium heat and add the butter and flour. Combine them till you get a pale-yellow paste.
• Continue to constantly stir your mixture while adding your single cream and a sprinkling of salt and pepper.
• Next, finely chop your garlic cloves and add them in as the sauce begins to bubble. Continue stirring and add in your mascarpone cheese.
• Once everything is combined, add in your ricotta, and mature cheddar cheese and continue to stir. When all the cheese has melted together, you should have a delicious cheesy sauce that is lovely and thick.
• Now, place your salmon fillets into the baking dish and cover with the sauce, adding any extra cheese on top if desired.
• Bake in the oven for 40 minutes and garnish with gem lettuce for a tasty recreation of Kenny’s salmon with all the in-game buffs.

Last, but certainly not least, how could we create a list of the tastiest video game foods and not include the Mario mushroom. Anyone who’s played Mario has asked themselves what it tastes like, and with Super Mario Bros turning 35 this year, now’s the time to find out.

Of course, we’ve added our own special take on the food. Simply eating a mushroom might not be to everyone’s taste, so we’ve reimagined it as a selection of yummy, mushroom inspired cupcakes.

• Preheat your oven to 190 degrees and line a cupcake tray with 9 cases.
• In a large bowl, add your cake’s caster sugar and butter and mix until well combined and creamy.
• Next, add your eggs, vanilla extract, and milk. Mix everything until well combined.
• Finally, sieve your flour and add it to the mixture slowly to ensure no clumps are formed.
• Distribute the batter equally into your cupcake cases and pop them in the oven for 15 minutes. When ready, carefully use a knife to check to see if your cupcakes are done by sliding it into the centre of one. If the knife comes out wet, bake them for another 5 minutes. Once cooked, put your cupcakes in the fridge to cool.
• Whilst your cupcakes are cooling, create your buttercream by combining the butter and icing sugar. The longer you mix them together, the fluffier the cream will be, so you can mix until you’re happy. Next, add in a food colouring of your choice.
• For the decorations, roll out your coloured fondant. Using the image above for reference, carefully cut out the shapes you need and then top your cupcakes to complete your mushrooms. They won’t make you supper-size, but they taste fantastic!

And that’s it, those were our top 5 tastiest video game food recipes. We hope you have fun recreating them, why not show the Ebuyer team your creations on social media.

For more gaming news, tops 5’s, and tech advice, you can head over to the Ebuyer Gaming Hub. And if you want to play any of the games mentioned, we have a range of gaming laptops and PCs in our store to suit your needs.