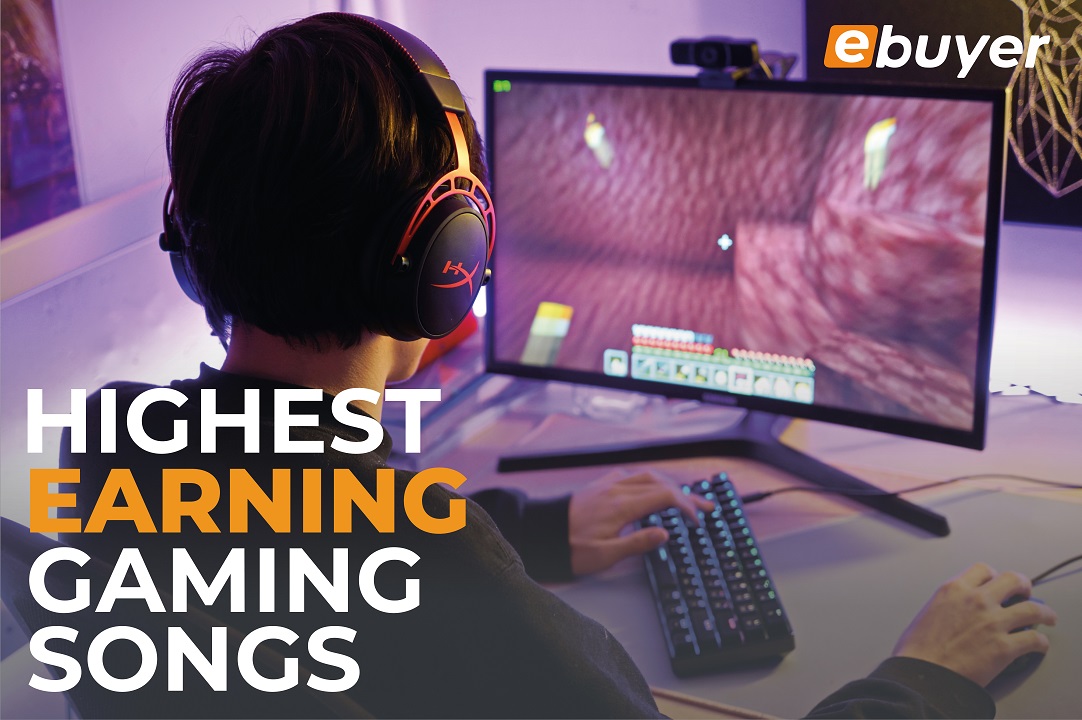 Do you love a good soundtrack while gaming? We’ve ranked the top-earning videogame songs of all time, so you build a list of the best tracks to kick ass to!

There’s nothing quite like a killer video game soundtrack when working on your laptop or desktop PC. Whether you want an epic backing track to power through a difficult workload, or just a chilled tune to unwind with as you cook, nothing quite hits the spot like a good gaming soundtrack.

From Halo’s iconic riffs to Mass Effect’s galaxy-spanning sci-fi ambience, there are a lot of great songs to choose from if you want to build a gaming playlist of the best gaming tunes out there.

But what are the most popular gaming tracks, and how much have they actually earned? To find out, we put our heads together and went hunting on Spotify and YouTube.

With all this data in hand, we can now reveal the highest-earning gaming songs currently out there, to help you build the foundations of a brand-new gaming playlist!

Pretty much everyone’s heard of Minecraft. It’s beloved by many and has come a long way from its humble roots to become a staggering cultural phenomenon.

What might come as a surprise, however, is just how popular its music is. Minecraft’s soundtrack isn’t exactly a rip-roaring symphony from the likes of the Witcher franchise, but the track Sweden, by C418, has proven to be the highest-earning video game song of all time.

Based on Spotify data at the time of writing, Sweden has been streamed 102,231,172 times, earning a tidy $408,924.69! That’s not too bad for a relaxing tune filled with casual dulcet tones; the perfect accompaniment for when your house is obliterated by a rogue creeper.

So, with Sweden and Minecraft taking the top spot, what other tunes make the top five?

Well, for the second spot, we leap from Minecraft’s quiet but wholesome piano sounds to the insanity-driven, electric heavy metal riffs of Doom! Rip & Tear, by Mick Gordon, has been streamed over 63,644,520 times, earning $254,578.08 thanks to its hectic solos and pulse-pounding techno flares.

And if you need a fast-paced, adrenaline-pumping soundtrack to accompany Rip & Tear, any track from Doom is going to hit the spot.

If you’re after a covert war theme to your music, Black Ops doesn’t disappoint, and this soundtrack is one of the reasons this game is so beloved by the COD community.

Our fourth highest-earning song should also come as no surprise. The Last of Us came out in 2013 and quickly took its place as many people’s favourite game, and the track The Choice, by Gustavo Santaolalla and Alan Umstead, might be part of the reason why.

Being played 41,851,879 times, with earnings of $167,407.52, this emotionally charged track will bring a tear to the eye of even the most stoic gamers as they remember why single-player, story-driven games are just so damn good.

And last, but not least, the fifth highest-earning video game song is Sleepwalking from GTA V, by The Chain Gang of 1974. Having been played more than 39,088,659, and earning $156,354.64, it seems people still can’t get enough of Grand Theft Auto; and that includes its music.

While certainly not the lowest-earning songs of all time, the last three on our list don’t come quite as close to the plays and earnings of the top five. And the bottom two in particular actually placed surprisingly low.

Among our lowest-earning songs is Battlefield One, by Johan Söderqvist and Patrik Andrën, off of the Battlefield 1 soundtrack. Having been played 7,484,536 times, it’s only earned $29,938.14; but if you’re after a patriotic vibe with your music, then this is the song to go with.

Now for some really old songs. Practically anyone who’s even heard of video games knows what Tetris and Super Mario are.

This genuinely came as a surprise, especially when you consider how much people love these franchises. But while they might be at the bottom of the list, these two songs are still great to listen to if you want some old-school, retro tunes.

And there you have it; that’s our list of the highest-earning video game songs. There are, of course, plenty of other great soundtracks and music out there from all manner of video games that could make a nice addition to any playlist.

Of course, if you want to experience these songs at their peak, then the best place to do so is by playing the game itself. We’ve everything you need to build a gaming PC right here in the Ebuyer store, including graphics cards, RAM, and high-speed solid-state drives.

And don’t forget to head over to the Ebuyer blog and knowledge hub as well, for more interesting articles like this one!

Who Are the Most Trolled Twitch Streamers?
To Top