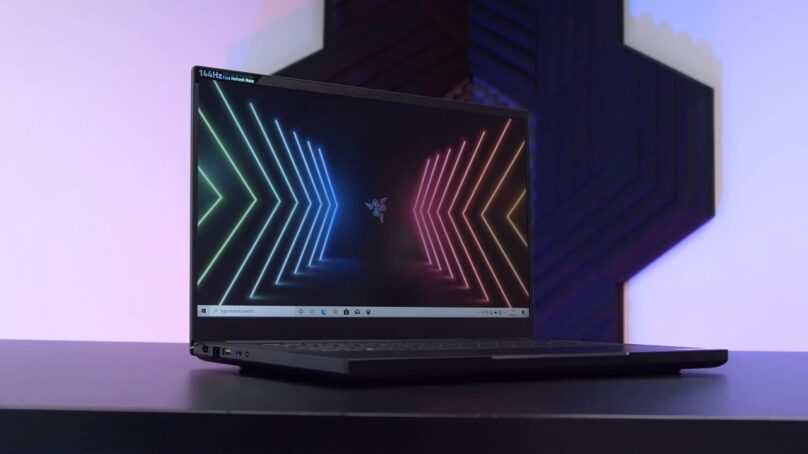 Razer. No doubt you’ve heard of them. As one of the most recognisable and established brands of gaming gear, Razer has made a name for themselves through their high-performance peripherals such as gaming keyboards and mice.

But Razer’s most exciting development was tackling hardware in the form of gaming laptops, and they’ve turned out to be some of the best you’ll find on the market. Let’s find out what makes a Razer gaming laptop so good.

When we think of a ‘gaming laptop’, an image of a thick and unwieldy device springs to mind. Crammed full of gaming-grade hardware and adequate cooling to keep thermals in check, a gaming laptop must be on the heftier side, surely? However, the shockingly slim form-factor of a Razer gaming laptop blurs the line between a lightweight ultrabook and an ultra-powerful gaming laptop.

Let’s look at the Razer Blade 14, specced-out with an AMD Ryzen 9 6900HX and an NVIDIA GeForce RTX 3080 Ti. That’s an eight-core, multi-threaded CPU and the world’s fastest mobile GPU – yet this outrageously powerful gaming laptop weighs in at 1.78kg and only 16.8mm thick. By volume, it’s the smallest 14” gaming laptop. Compared to a standard fare of 15” gaming laptops, the Razer Blade 14’s volume is 40% less. This puts it in closer competition to non-gaming laptops, with low-powered integrated GPUs.

For on-the-go gamers and content creators, it’s a mind-blowing proposal to be able to sling desktop-grade power into a backpack. Perhaps you’re a student who needs a laptop which will see them through uni and late-night LAN parties, or a YouTuber who need to whip up content while away at a convention. Either way, a Razer gaming laptop is the perfect fit. Get real-world gaming performance with the latest 12th Gen Intel Core CPUs and NVIDIA GeForce RTX 30 Series, in a portable form-factor.

How has Razer managed to squish high-powered hardware into such a confined space? On their higher-end gaming laptops, where it’s needed most, Razer’s smartly deployed a vapour chamber cooling solution. By evaporating and condensing an internal fluid, a vapour chamber helps a Razer gaming laptop to stay surprisingly cool for its power envelope and form-factor.

You can learn about how thermals impact performance and more in our PC cooling – What you need to know blog.

Whether you’re after an ultra-portable device or a desktop replacement, Razer offers up a wide range of gaming laptops with 13”, 14”, 15” and 17” displays. What’s more, each model of gaming laptop comes in several configurations, so you’ll be able to get exactly what you want.

On a Razer gaming laptop, there are three main display options: a 1080p/360Hz display, a 1440p/240Hz display or a 4k/144Hz display. Each display, regardless of resolution and refresh rate, comes colour-calibrated from the factory for superb accuracy out of the box, with razor-thin bezels to boot.

If you need help deciding which display’s best for you, check out our Best Gaming Monitors of 2022 blog for further information on resolution, refresh rate and more.

Gamers queueing up for ranked and competing at an esports-level will surely opt for a 1080p/360Hz display option. It’s not only the fastest refresh rates we’ve seen on gaming laptops, but standalone gaming monitors too. Such a ludicrous speed ensures you’ve always got an upper hand, seeing the latest frames as soon as they’re rendered for lightning-quick reactions and flick shots.

Whereas content creators would benefit greatly from the sheer sharpness and wider colour gamut of a 4k/144Hz display option. Covering 100% if the DCI-P3 colour gamut with an anti-glare coating, it’s tailor-made for colour-critical work wherever you are. The refresh rate’s nothing to scoff at either, more than adequate for most gamers and a considerable step-up from 60Hz on most non-gaming laptops.

If you’re a laptop owner, you’ll know audio is often the weakest element of these portable devices, seemingly treated as an afterthought. When a laptop’s internal space is largely consumed by its mainboard, cooling solution and battery, manufacturers don’t have much choice but to squeeze in underwhelming, down-firing speakers.

Razer gamer laptops are no-compromise machines, however, so audio is given as much focus as any other feature. And Razer has got a trick up their sleeves to make this happen – they own THX. Yes, the company behind cinema’s iconic ‘Deep Note’ lends it expertise to the speakers of a Razer gaming laptop, with great results.

In terms of hardware, the speakers themselves are a notable improvement over ones included on most gaming laptop. Lift open a Razer gaming laptop’s display and the large, front-firing speakers flanking the keyboard immediately impress. As they’re aimed towards your ears, instead of down into a desk, the audio is more clear and not muffled and downed-out.

The speakers are also driven by THX-certified Spatial Audio tech, for an eerily convincing 7.1 surround sound sensation. It makes tracking your opponent’s footsteps in a 3-D space possible – on laptop speakers! A gaming headset might be optimal for long sessions, but high-quality speakers are great for kicking back and catching up with YouTube and Netflix too.

Having a keyboard that’s simultaneously easy to adapt to and satisfying to thrash away on over long sessions is essential for the best gaming laptops, and Razer absolutely nails them. We’ve covered quite a few Razer gaming laptops over on Ebuyer’s YouTube, and after a couple rounds of a typing test, guest presenter James found no trouble besting his high scores.

It’s by no means mechanical, but a Razer gaming laptop’s keyboard has a decent amount of travel, with a clicky, tactile feel that’s not too dissimilar from the real deal. It takes no time to adjust from your stationary set-up with external peripherals, to your on-the-go Razer gaming laptop. Of course, it’s great for gaming, but this familiarity makes it great for work tasks too. If you need to quickly type something up while out and about, you won’t be fumbling over your own fingers.

The other half of the input equation is the touchpad, and it’s one of the best you’ll find on a Windows laptop. Powered by Microsoft Precision drivers for reliable gestures and pin-point tracking, a Razer gaming laptop’s touchpad is a huge upgrade over alternatives – in a literal sense. It’s one sizable, smooth and clickable touchpads most comparable to an Apple MacBook. It’s high praise indeed, no other gaming laptop compares as favourably.

As it’s a gaming laptop, of course the keyboard is RGB backlit! Customisable through Razer’s Synapse 3 utility, it’s one of the most robust and feature-rich implementations we’ve seen.

Key Benefits of Razer Gaming Laptops (and some cons)